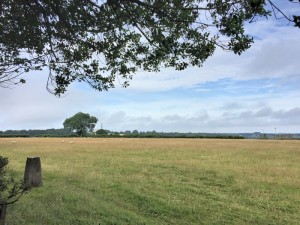 View from my roadside location

On Sunday the 2nd of August I had an opportunity to activate 3 SOTA summits in the South of England. The YL was taking part in the 100 mile Prudential Bike Race going through London and Surrey. This involved an early start, leaving our home QTH at 5:30am. After dropping her off in Hackney I then navigated the traffic chaos and dishevelled clubbers of central London to make my way to Botley Hill in the county of Surrey, which is also the highest point on the North Downs.

Botley Hill is quite a flat summit covering some distance. I parked up in the car park at TQ398554 and then walked 5 minutes to the trigpoint (TP1536 – valid for WAB Trigpoint award). The Trigpoint is located on private farmland but you can get to within about 5m from the road side. I used my Garmin GPS to locate it, as it’s hard to spot through the roadside hedgerow. I stayed on the “right” side of the barbed wire fence next to the road: 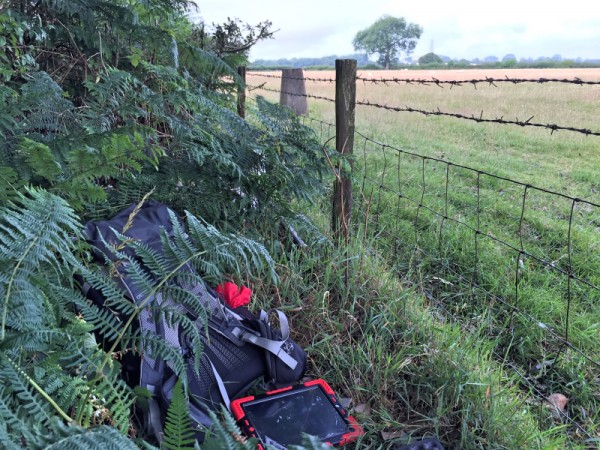 Not spacious but qualifies for the WAB Trigpoint award!

This spot is very limited in terms of space and I think it would be hard to put up an HF antenna in this spot while staying on the correct side of the fence.

I wanted to activate this summit quickly so chose to use 2m FM and my Yaesu FT-270 handheld. I’ve been impressed on my last couple of activations with the speed of setup when using such simple equipment and I haven’t had an issue qualifying a summit on 2m… yet! 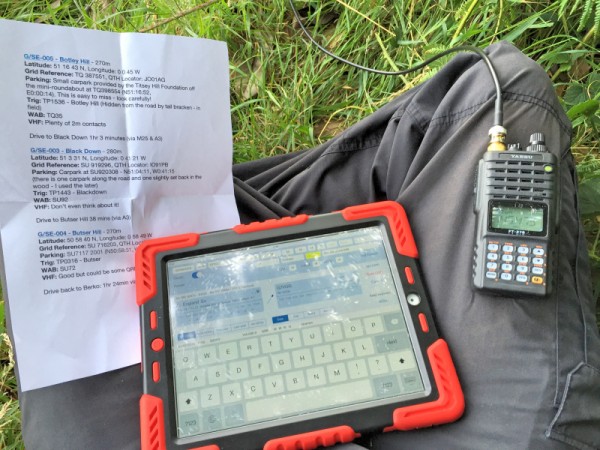 My 2m Setup with iPad for logging and summit data sheet

I strapped the 2m SOTABeams MFD to the fence post, despite reservations about the tree I was located underneath and the heavy foliage surrounding me! 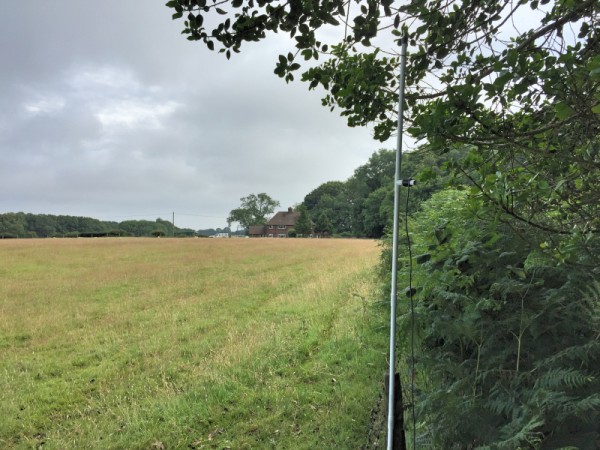 I chose not to spot myself unless I needed to and started calling on the 2m calling frequency of 145.500 MHz. Des G4ESG came back to me straight away so we moved off the calling frequency down to 145.475 MHz to complete the QSO. Straight after this I called QRZ and had Alf G7VGG come back to me.  I had a good chat with Alf and he tipped me off about the slim jim antenna. I’d previously heard of this antenna but didn’t realise the 6dB gain and low angle takeoff it offered over a regular 2m dipole, this will be my next antenna project!

During this QSO a farm vehicle pulled up alongside me and enquired what I was doing, I assume this was the lady living in the nearby farm house I was in partial view of. I mentioned that it was radio related and looking bemused she asked how long I would be. After answering 10 minutes she drove off. It was a strange one as strictly I wasn’t on the private land, but I can imagine they may have been suspicious of someone in the hedgerow right next to their field!

After calling QRZ again, Tony 2E0TSA/A come back to me, I’ve had a number of QSO’s with Tony, usually when he’s on the Leith Hill summit, this time however he was /A. Three contacts logged, one to go!

This is where I find HF and VHF SOTA activations differ; on HF you never realise once you’ve completed 4 contacts because there’s a large pileup waiting to be worked… VHF is quite different though, after getting my 3rd contact I often get the fear that I may not get that all important 4th contact!

Not to worry though as Malcolm G0DGF came back to me after another CQ on the calling frequency. After finishing this quick QSO I was happy to activate the summit and pack up before the farm lady came back!

I enjoyed this activation but due to the non-distinct summit and location I don’t think I’ll return unless I happen to be in the area.

I’m sure there are nice activation locations within the activation zone but I wanted to do this summit for both SOTA and WAB Trigpoint awards which meant I ended up next to the road.

After grabbing a sausage bap and a tea from the nearby Botley Hill Farmhouse cafe, I headed to my second activation at Black Down (G/SE-003) which was about a 1hr 15 minute drive away.