This string of 5 summits along the South Downs way in Sussex had been on my hit list for some time. I’d always consciously saved them for a nice summers day. Michael G0POT had activated this string of summits before and had given me a lot of his logistical planning – I’ve built on this and included the information below. 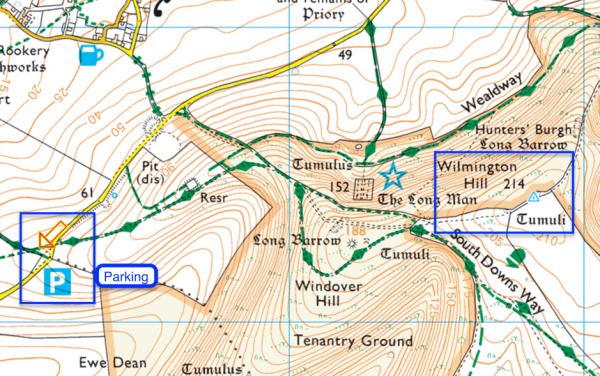 Wilmington Hill was my first SOTA summit of the day and it took about 2 hours to reach the car park from my home QTH in Hertfordshire. The drive was uneventful, mostly because I’d missed a lot of traffic on the M25 by leaving at 6am.

The WX was looking much better than expected and even by 8am I didn’t need to wear anything more than a T-Shirt. The walk followed the South Downs way and took about 30 minutes. Nice going in the early morning sunshine! 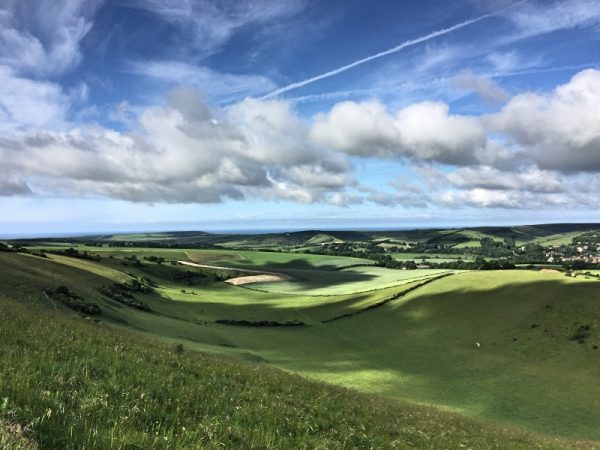 I promptly setup the inverted V Dipole on 60m, utilising a handy fence located a few meters from the trig point: 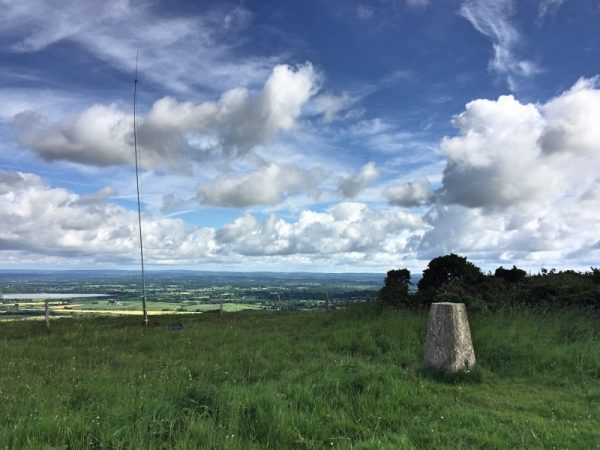 After this I fired up the Elecraft KX3 and sent a spot.

Dave G4ELP came back after a few calls who was down in Whitstable Bay, this was swiftly followed by 3 GI stations GI0AZA, GI0AWO and MI0WWB. The propagation to GI swiftly faded and returned to G after this.

I ended up working 8 stations in 15 minutes, not too bad considering most people hadn’t had their breakfast yet!

After getting back to the car I drove 14 minutes to the parking spot for Firle Beacon. 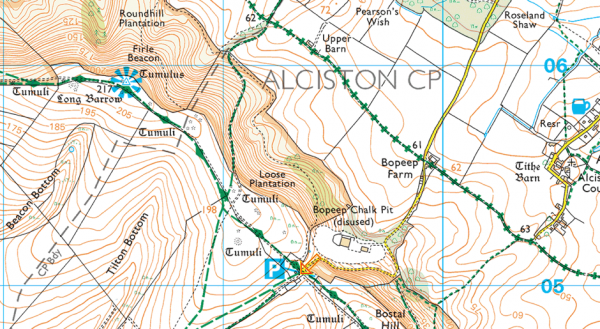 Upon pulling up at the car park I saw a guy attaching a 2m collinear to his car. After introducing myself he explained he was with RAYNET and volunteering for a Fire Brigade race over the South Downs.

It took about 15 or so minutes to walk to the summit of Firle Beacon and again I followed the South Downs Way.

I’d chosen to activate this summit on 6m, primarily because it had never been activated on this band before and also because of the chance of some summertime sporadic-E.

Initially I’d chosen to operate a few meters from the trig point, but I soon found I’d left my entire guying set in the car! So I had a fishing pole mast and a 6m Moxon ready to go but no way of keeping it in the air… A rummage through my bag threw up a few reusable cable ties. Looking around I saw there was a fence running along the path! In a few minutes I had the mast strapped to a fence post. 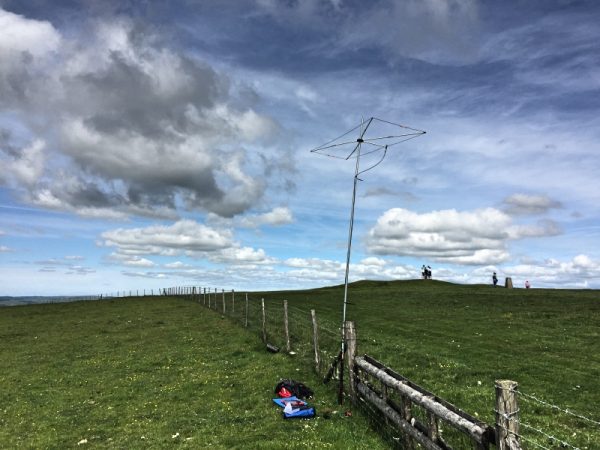 Turning on the KX3 I quickly realised that the band was closed for Sporadic E with nothing heard. Still I had a great saltwater takeoff so I beamed to Europe and called CQ for 15 minutes. Alas nothing heard! Now I pointed the Moxon towards the mainland and Duncan G4ELJ broke my dry spell, followed by a tough contact with Dave 2E0KVJ down in Devon. After this I picked up Kevin G4BXG a stones throw from me in Lewes. Mike G6TUH was my very welcome 4th and final contact. I had a good chat with Mike who is local and just down in Brighton.

Well the second activation had been a bit more challenging than I had thought it would be. After the contact with Mike I decided to cut my loses and break camp.

I drove 14 minutes to the car park for my next summit of Cliffe Hill. 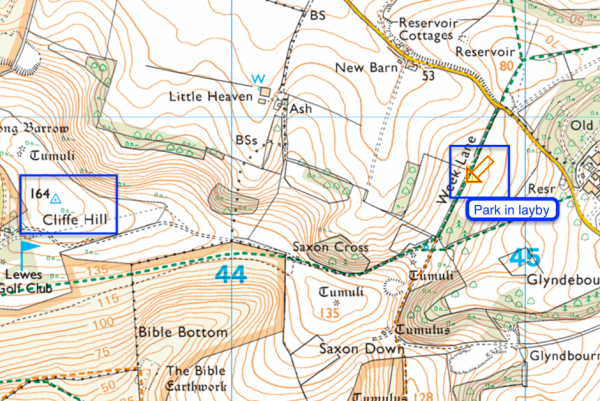 Now I’d heard that you should seek permission to activate the trig point on this summit. The reason? Well there’s a golf course all around it! I hadn’t done this and as it was Saturday and sunny the place was swarming with golfers. Not liking the idea of being hit by a stray golf ball I setup just outside of the course along the permitter fence, according to my GPS unit this was still easily within the activation zone and was a lot safer! 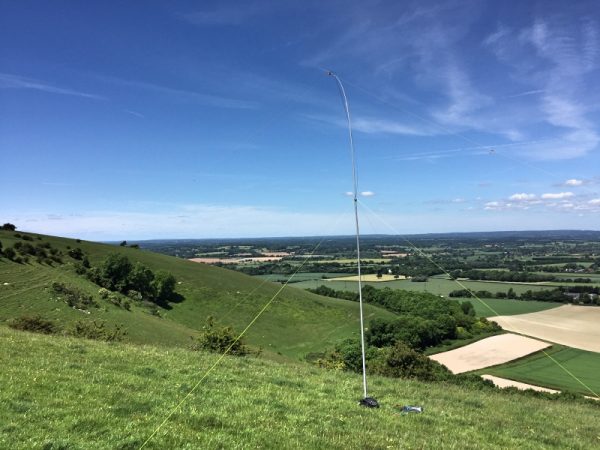 I setup the 60m inverted-V dipole for the second and final time this day. Quickly I was on the air and in QSO with Mike G6TUH, obviously a very good signal as he was only about 8 miles away! Next contact was with Martin MI0RTY a more respectable distance away.

I had 8 QSOs in a relaxed 30 minutes of operating – the overriding sense was that most people were out enjoying the sunshine rather than sat in their shacks! 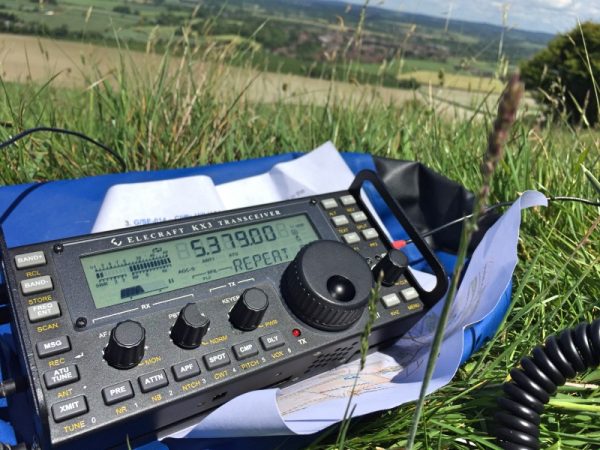 Once I got back to the car I drove to a petrol station in Lewes to grab some fuel and a bite to eat, then I drove 18 minutes to Ditchling Beacon. 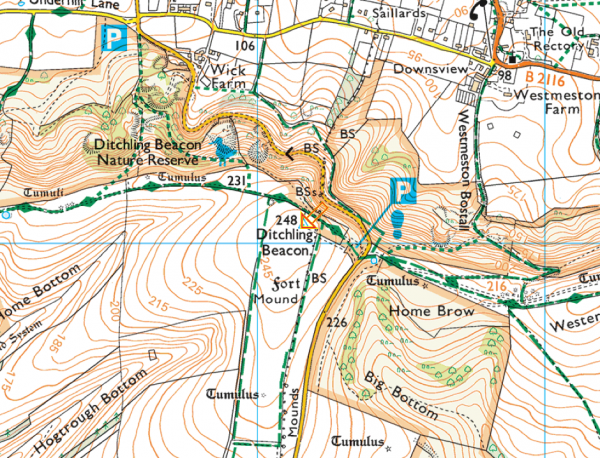 By the time I arrived at the National Trust car park I was disappointed to see they had the bollards out indicating it was full. Just as I was about to drive on a car left, freeing up the one space I needed – the car parking honesty box was also out of service so it was free parking rather than the usual £2!

I hadn’t activated this summit since 2014 but this time my walk to the summit was much easier and took a whole 5 minutes from the car park!

I decided to ring the changes here and try 2m FM. I’d also get to debut the new 2m slimjim antenna I’d made earlier in the week to see what it could do.

After some lunch at the summit I attached the slimjim to my 5m fishing pole mast and strapped it to a fence post near the trig point: 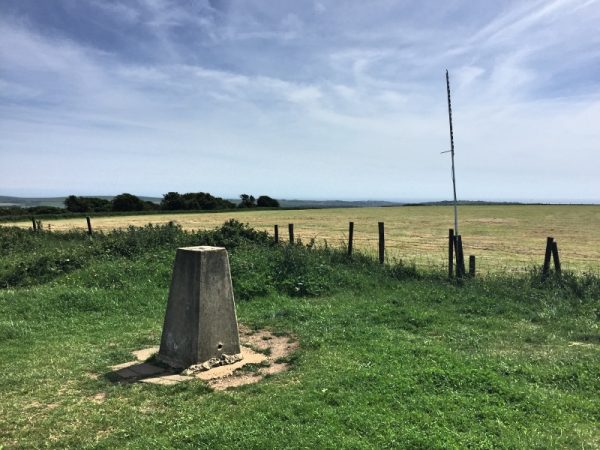 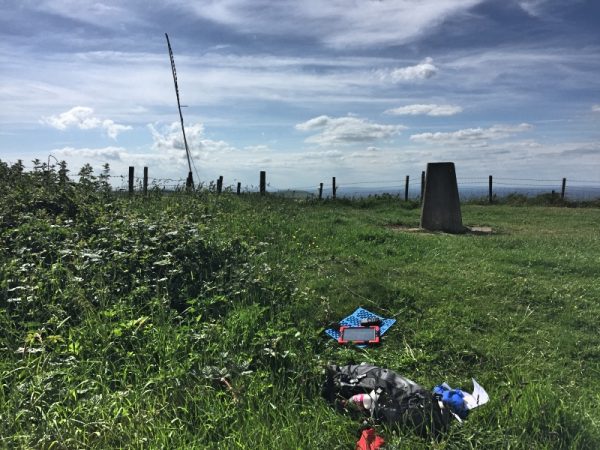 I used my trusty Yaesu FT-270 for this activation and was soon in QSO with Mike G6TUH/P again. He was operating from his back garden using his handheld. After this I was called by GB1SCW (Shoreham National Coast Watch Station). After this I was called by Ian G7HFS/M operating mobile from Beachyhead. We had a nice long QSO about various things including being able to work Dutch 70cm Repeaters from Beachyhead!

After this another three calls came before I remembered I still had another summit to activate and promptly pulled the plug.

The slimjim had passed the initial test and was certainly resonant and performant. I look forward to trying this from higher summits to see how it stacks up to my usual 2m mainstay of the vertical dipole.

I then got back to the car and drove 45 minutes to my fifth and final summit of the day. The longest drive between summits yet! 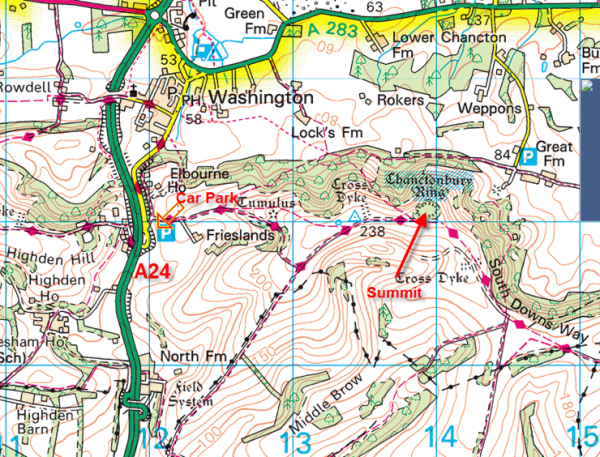 Arriving at the car park at the base of Chanctonbury Ring I was happy to make it to the 5th and final summit of the day in good time. It was just after 5pm and it looked like 6m was now buzzing with Sporadic-E. I swiftly packed my 6m kit alongside my Yaesu 857 and walked the 30 minutes to the trig point. I knew from research that the summit had never been activated on 6m before so was keen to give this a go!

Most walkers tend to head to the ring of trees rather than the trig point, this suited me just fine, the trig has a clearer takeoff anyway! 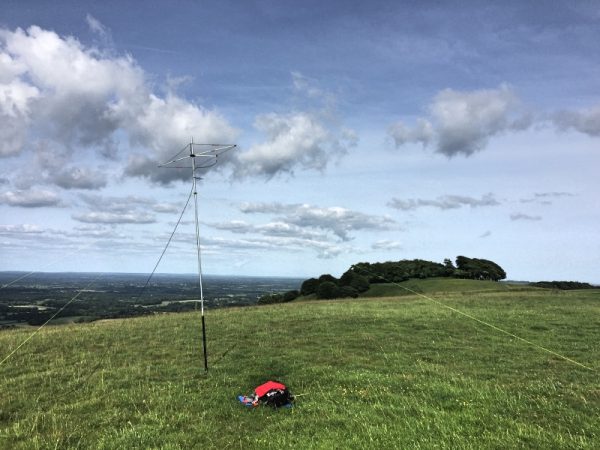 I’d chosen the Yaesu 857 for this activation for the extra power and decided to under run it at 50w in order to conserve the battery in case I wanted to stay there for any length of time… this was scuppered by the fact that I’d just run out of water! 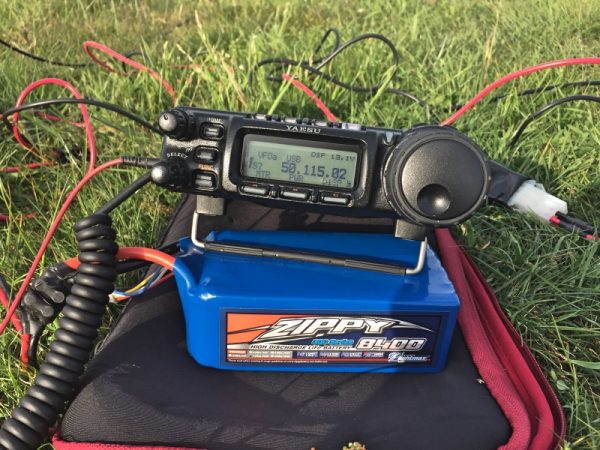 A quick tune around showed a lot of big signals coming in from the south of Spain and Portugal.

My first call turned up Marc CT1EHI (in IM67aa), followed by Andy G4CBS (in IO90) for something closer to home. After this I worked two EA7 stations in IM87.

My highlight QSO was with Yuri UT1FG/MM who is a prolific operator from the Ukranian boat he is a captain of. He was located in IM65 just off the straight of Gibraltar and as such was located in a rare wet square rarely heard on 6m! Obviously all of Europe wanted to work him but I managed to break the pileup on the third attempt with 59 signals both ways. I have to say I was really confused initially as he wasn’t signing maritime mobile /mm and appeared to be giving a Ukranian call from a square in the very south of Europe!

I finished this activation with 8 QSOs in a relaxed 40 minutes of searching and pouncing.

This was a gorgeous summers day and the perfect time to activate these 5 summits overlooking the sea, it wasn’t overly stressful, the walking was moderate and the activations fun. I particularly liked ringing the changes and activating a mix of 60m, 6m and 2m throughout the day using different rigs and different antennas.

It was good to give both Firle Beacon and Chanctonbury Ring an airing for the first time ever on the 6m band. I like to do something different from a summit when I get the chance and both summits had plenty of 2m contacts logged so I knew the takeoff wasn’t too bad!