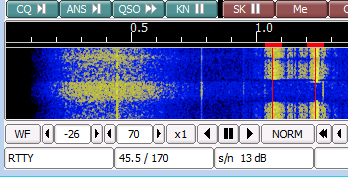 Although PSK31 is more popular than ever there still seems to be a preference for RTTY when it comes to contests. This is down to speed, ease of use and the resilience of the mode.

It’s also a mode worth getting familiar with because a lot of DXPeditions and special event stations run RTTY.

In the recent CQ WPC RTTY contest i did some casual operating and within 4 hours i’d made 80 contacts while operating 50w into my home made attic dipole. I’ve found the mode to be less popular outside of contests and this is where PSK31 very much seems to be the  mode of choice.

You’ll find lots of interesting call signs during any contest and this is also true for RTTY contests, countries that often aren’t heard will appear, DXPeditions will be running, club stations, contest groups and even operators with their own shorter contest call signs are found.

This is one of the joys of operating in a contest, especially if you’re a “little pistol” station and aren’t realistically “in it to win it”, the rarer stations also don’t seem to attract the huge pileups seen outside of contests, because everyone has to make as many contacts as possible and can’t afford to spend the time to try and crack a pile up. Towards the latter stages of a contest there can be rich pickings, because most other stations will have already had QSOs with the DX, so you’ll have even more of a chance of getting through first time. The DX will also be happy to work you too because you’re another point during a slow part of the contest!

The aim of a contest QSO is to be as minimal as possible yet accurate at the same time, while everyone has their preference the typical contest RTTY QSO follows a similar structure. Below we run through this with some explanation:

You’ll probably encounter these two during a QSO as well:

The serial numbers can be generated automatically in Fldigi using macros. First of all we need to look at the contest settings in Fldigi: 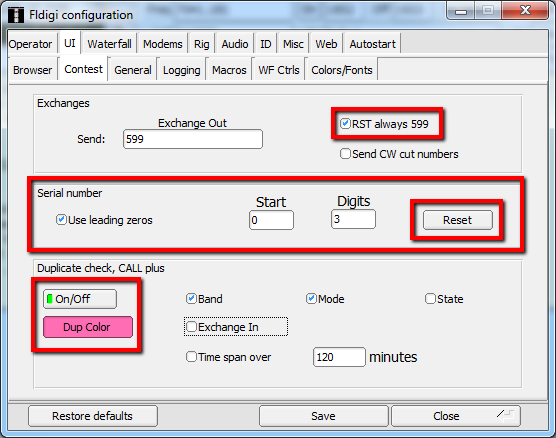 Go to Configure > Contest to get to these settings. In the Serial number section we’ve told Fldigi to start the contest count from 0 and use three digits, based on this the first serial generated will be 001.

Here’s the macro i use to send the report and serial number:

Contesting is a personal thing and for me i’m realistic and know that my setup of 50w to an attic dipole is not going to give me a chance to win a contest, unless of course i choose a niche category (QRP, single band etc..). So for me the enjoyment comes out of contacting as many stations as i can and working interesting stations.

Contesting also offers the chance to collect some more rare DXCC. Some people wrongly assume there’s no reason to enter a contest as a small station but by being realistic and setting your own targets you can have a lot of fun in doing so.

Give it a go the next time the lower part of a band is overrun a RTTY contest!