The other week I was casually researching how to make a multi-band vertical for the HF bands, initially I was thinking of a single length of wire, with traps, to separate the bands. My primary reason for wanting a vertical was to work a bit more DX, taking advantage of the low angle takeoff offered by vertical antennas. During my research I came across the “DX Commander Lite” kit that Callum M0MCX sells.

The kit gives you a four band vertical mounted on a 7m fishing pole (i.e. low visual impact) and seemed to fit what I was looking for really well. The elements run up the pole in parallel, kind of like an upside down fan dipole. The spacing between elements is probably no more than about 4 inches.

I purchased the kit on Tuesday, it arrived on Friday and it was on the air by Saturday! The kit just comes with the bits you need, requiring you to cut the elements, radials, guys and general rigging bits. Instructions are done by way of a manual and a series of YouTube videos, between these you can’t really go too badly wrong.

My first impression was that the ground plate (for connecting radials) and the driven plate were well engineered, and certainly surpassing anything I could have built myself. Callum runs this as a hobby business, and I thought the quality of the parts was really good for the price I paid (£92.50 plus shipping).

I started the build by choosing the bands I wanted to cover. You can have a total of 3 elements, but with some clever band selection you can add additional bands as well i.e. the 30m band will give you 10m and 6m as a bonus.

I chose to cut elements for 30m, 20m and 17m. These seemed like sensible options given the current solar conditions. You could make a 40m element, but due to size you can only choose one other band then. At the height of the sunspot cycle, I’d probably replace these with dedicated elements for 15m, 12m and 10m.

The next job was to cut all 30 of the radials, the ground plate has 5 connection points, so I made 5 sets of radials, each set containing 6 radials, giving me 30 radials in total! According to Callum the radials only need to be 2.5m in length, this is convenient but much shorter than I expected. I’d previously always cut radials to be a quarter wave length on the lowest band I planned to use, so for 30m I’d make each radial 7.5m long. Callum explains the rationale for the short radial lengths here. Cutting the radials was probably the most time consuming part of the build, simply down to trying to keep the coiled wire tame and tangle free!

After this I simply had to cut the guying ropes for the pole and the rigging to hold the elements in place.

I estimate the build took me about 4-5 hours in total, it was pretty straight forward and not too much fiddling was needed.

I had the vertical up in the back garden in no time, it’s designed primarily for portable use rather than long term use, so it’s quick and easy to put up and tear down.

Driven plate (on top) and radial plate (underneath)

The most time intensive activity was staking out the 30 radial wires:

30 radials spreading out from the radial plate

Regardless of how an antenna looks, the truth really comes out when you put an antenna analyser on it. Would it be be resonant where I expected it to be? Would I need to adjust the elements?

I put my SARK-110 analyser on it and swept through the various bands from 30m to 6m. Here are the results:

Are the resonant points perfect? No! I could trim all three of the elements for 30m, 20m and 17m, to bring the sweet spot into the middle of the band. This would reduce the SWR even more, but they’re all currently <1.5 SWR and perfectly usable without an ATU. If I planned to run QRO then I’d probably go about trimming them further. For my use they’re good enough, and I’ve learnt sometimes it’s better not to start fiddling with antennas when they’re around 1.5, in more so when there’s potential interaction between elements!

I’ve only used the vertical on FT8 so far, but I already notice the difference over my multi-band Western HF-10 dipole. The contacts seem to be further out on the vertical, with less Western Europeans being worked. This is as you would expect given the low angle takeoff of a vertical, coupled with the relative low height of my dipole above ground, which in itself creates a higher angle takeoff. Great for NVIS on 80m and 40m but terrible for DX!

Within the first few days of operating I’ve worked a fair bit of DX:

That’s 4 all time new ones for me (Albania, Thailand, Indonesia and Oman), and ZA5V, HS0ZIV and YB3MM all responded to my CQ calls! Of course this is alongside the usual European and Russian stations. So far so good!

Here are my 17m spots after a few hours of operating FT8: 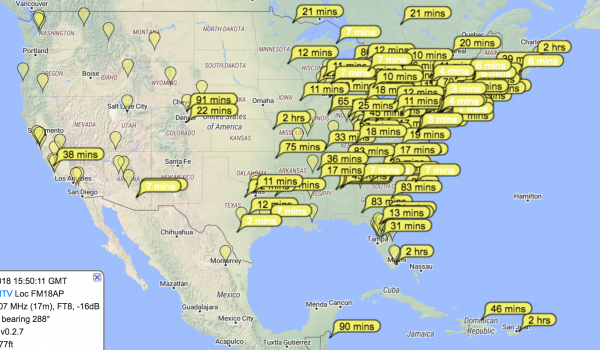 I was pretty happy with this compared to what I was receiving previously on the dipole on 20m. The spots are further out and certainly “getting across the pond” to North America is now easier. Of course this is during a particularly bad time in the solar cycle, where everything is a bit of a struggle, but pleasing results nonetheless.

Of course verticals typically suffer more noise than a dipole and this has been proven in my situation (I didn’t want the proof!).

I’m very happy with the supplied kit, the build was straight forward and the results are good. The quality of the parts are higher than I could have made myself, so the £92.50 price tag is worth it.

Time will tell how good it really is, but I look forward to giving it a good run in the forthcoming CQWW SSB contest, fingers crossed for some DX! DX results have been really promising so far.

But overall, mission achieved! I went from casually researching multi-band verticals online, to having one working in my garden within a few hours of effort.