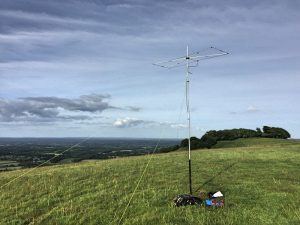 I’ve used the SOTABeams SB6 Moxon antenna for a number of years now, it’s a great compact antenna that performs remarkably for its size. Sadly it’s out of production now, but it’s easy enough to create your own. The stock SB6 is a 2 element directional antenna for the 6m band and I’ve made many contacts on it over the years and it sees a sunny hilltop each Sporadic E season.

What I needed was an antenna to get onto the 4m band, historically I’ve never really been on this band and never made a QSO using my own callsign. I wanted to get on this band in preparation for the 2018 Sporadic E season, normally when SpE starts on 6m you also have a chance of it appearing on 4m, once the ionisation builds and the SpE frequency increases. I thought about buying a Yagi, then I thought about the size and discarded that idea. Then I was going to build a dedicated 4m Moxon, I even purchased the plastic conduit and stole an old plastic chopping board from the kitchen, much to the YL’s confusion!

Then I thought about the possibility of a dual band Moxon, I’d never heard of this before, but some Twitter followers mentioned a commercial 4/6m Moxon they’d seen. This idea took hold because it offers the significant benefit of having one Moxon on a mast for 4m and 6m, using just a single feedpoint. It’s an elegant solution and especially well suited for Sporadic E work, because these are the two primary bands for this type of propagation (I’m conveniently forgetting 10m here, but that’s HF so doesn’t count – HI!). 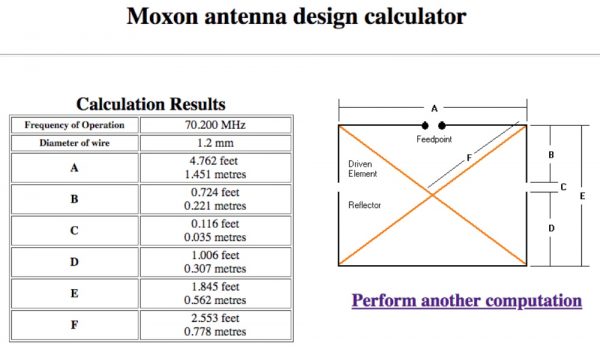 The dimensions for my 4m Moxon

My first step was to calculate the dimensions for the driven and reflector elements for my centre frequency of 70.200 (centre of SSB activity on 4m), I used this handy online Moxon calculator by W4/VP9KF. Obviously the 4m elements are smaller than the existing 6m elements, meaning the 4m Moxon would be nested inside the 6m elements. This raised an interesting question about interaction between the elements and one I didn’t have an answer for (more on this later).

I decided to try and feed both antennas using the same feedpoint, which was achieved rather easily: 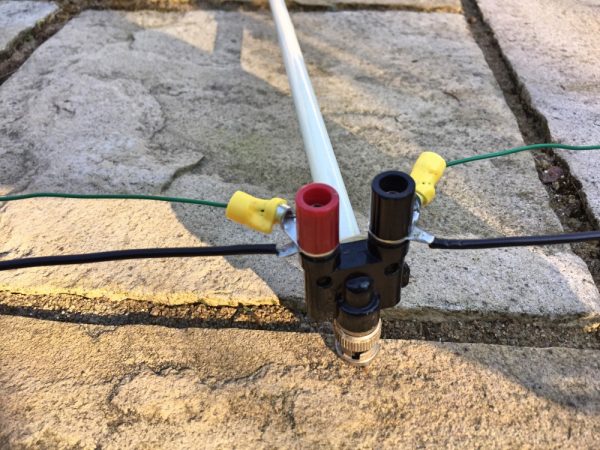 After cutting the elements, I used reusable cable ties to (temporarily) hold them in place on the Moxons fiberglass spreaders. 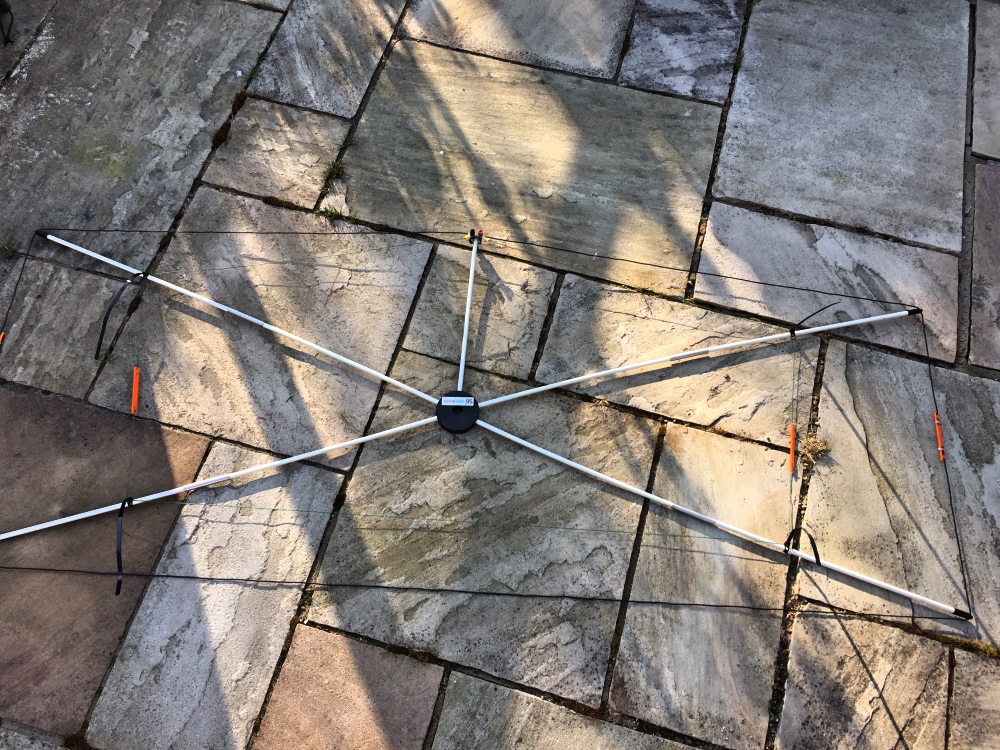 Not entirely clear, but this is the dual band Moxon on the patio

The next step was to get the Moxon up in the air and put the Sark-110 antenna analyser on it. My first concern was the effect of the additional wire on the existing 6m band, but my fears were quickly alleviated when the SWR measure was found to be 1.5 across the band: 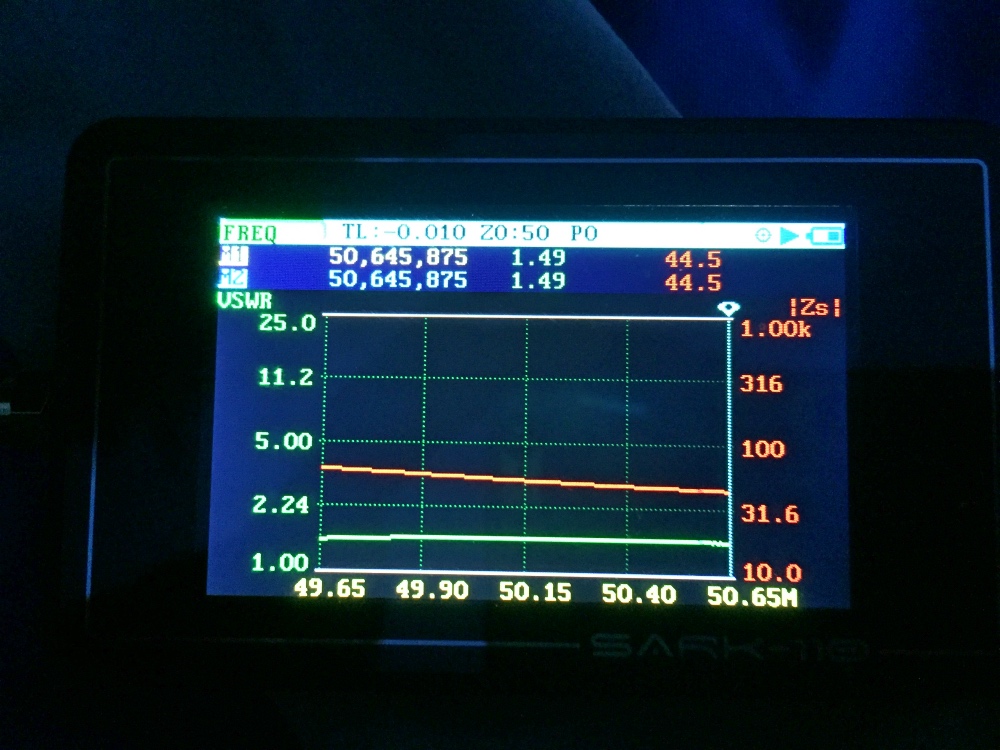 My first measurements on 4m weren’t quite so successful, the dimensions seemed a little off with the SWR around 3.1 on the band. Sweeping the band I saw that the SWR dropped higher up in frequency. This is annoying, because it means your antenna is too short! I cut some new driven elements with some extra length. After putting this back up I saw the SWR was lowest around 63 MHz – not a problem, I can work with antenna wire that’s too long!

I took out a campaign of methodically trimming small sections off the driven element and remeasuring the SWR. Slowly but surely the resonant point hovered up to 70 MHz, until I got it as good as I dared: 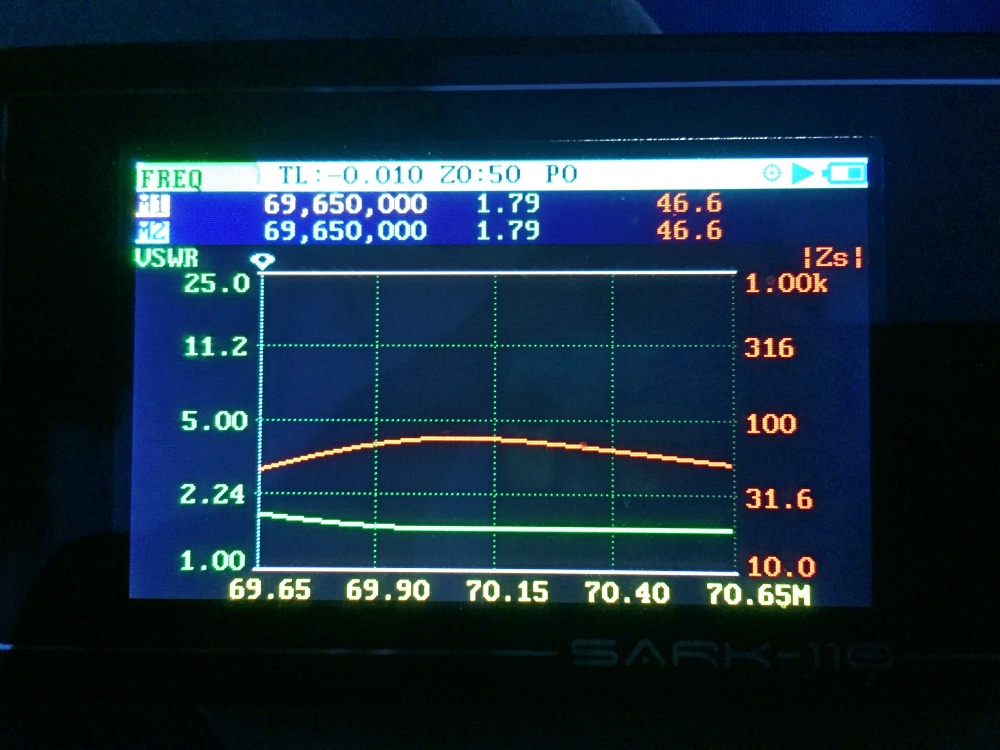 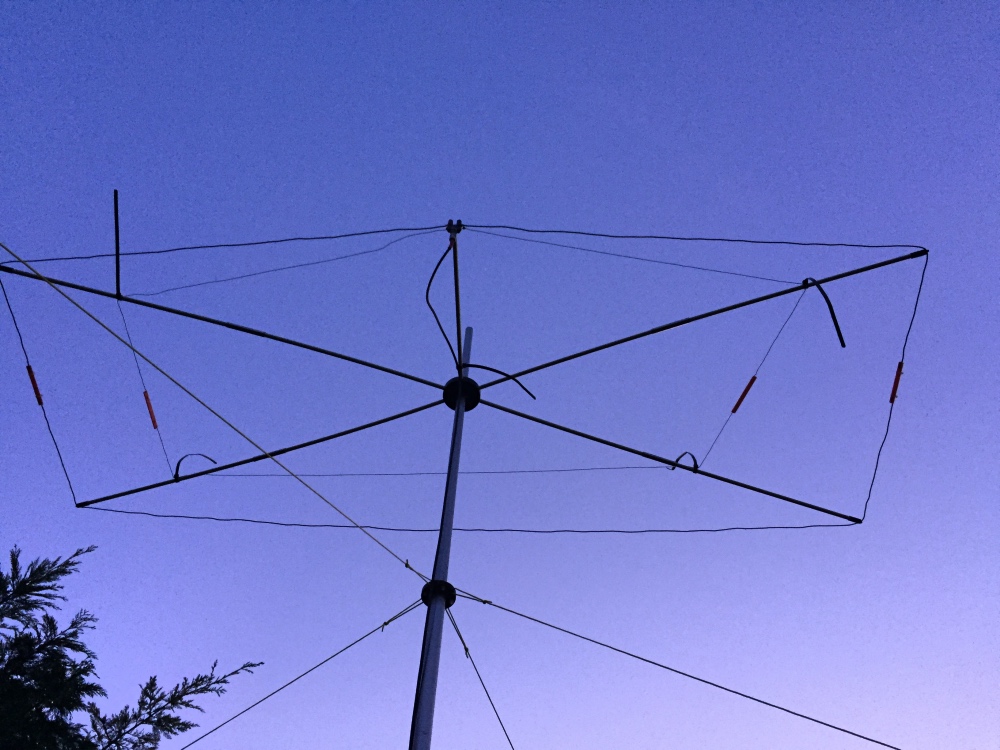 That was enough progress for one night, plus it was dark by the time I finished, so I went back into the shack and played some FT8 on 2m. The following evening saw a conveniently timed RSGB UKAC contest on 4m, this was a perfect time to test the dual band Moxon… 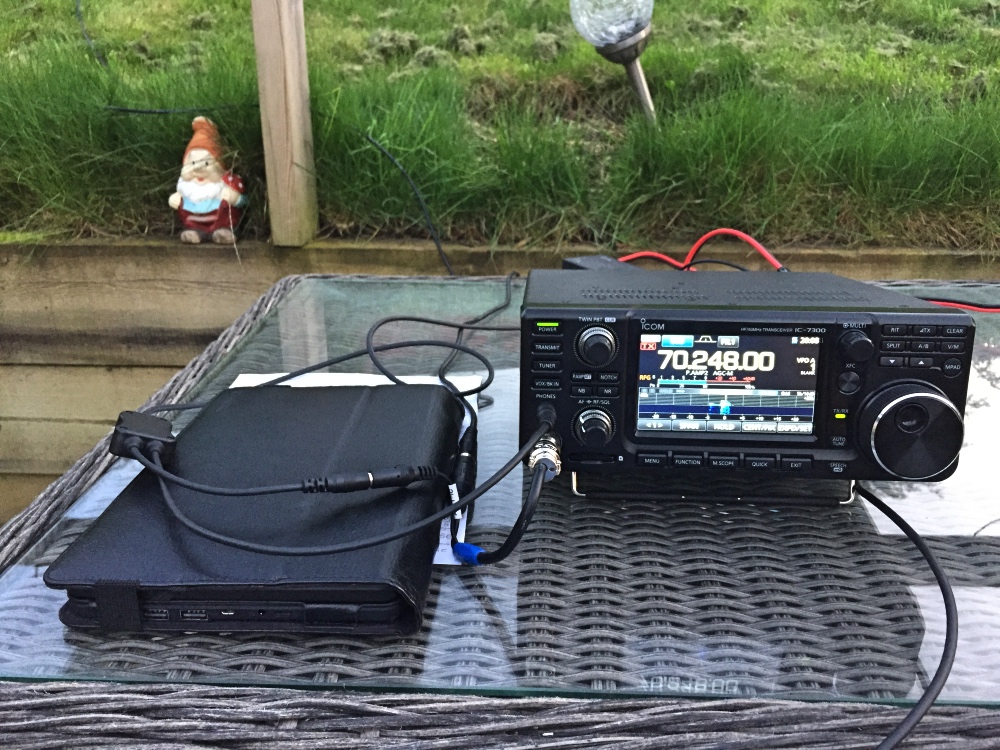 It was a nice summers evening so I setup the Icom 7300 in the garden and hooked up an overly long run of RG58 cable, which is quite lossy on 4m and not to be recommended. It was certainly receiving on the 4m band: 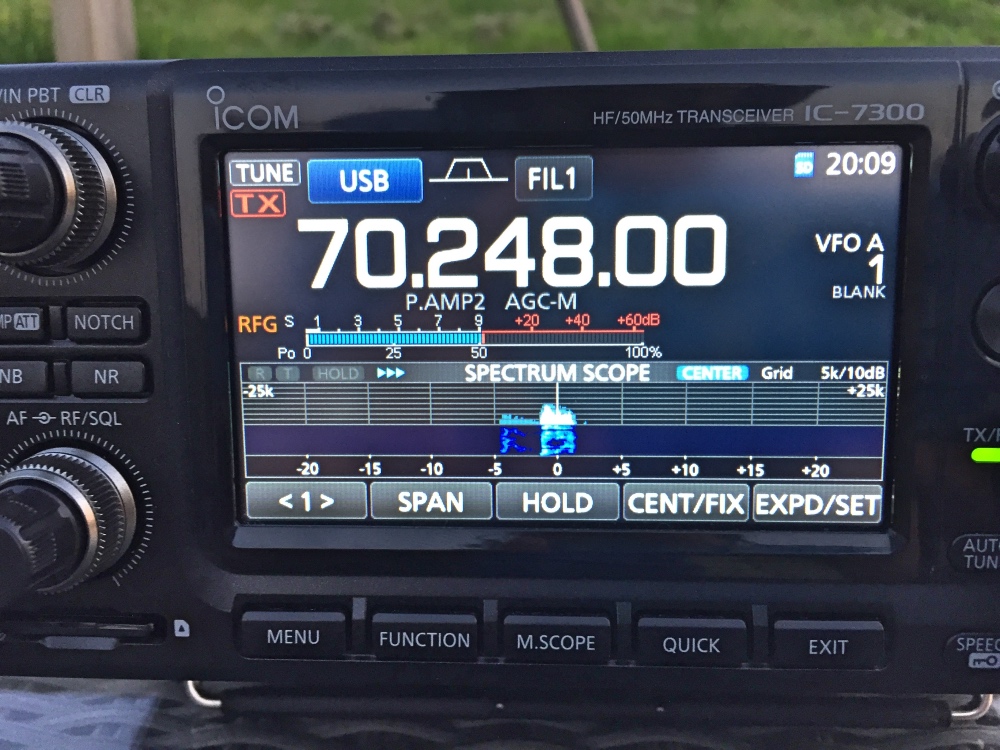 Booming signal coming in on 4m

I worked 14 stations during some very relaxed operating, with the best DX being just short of 200km under flat conditions. So the dual band Moxon works and I’m now setup on a new band: 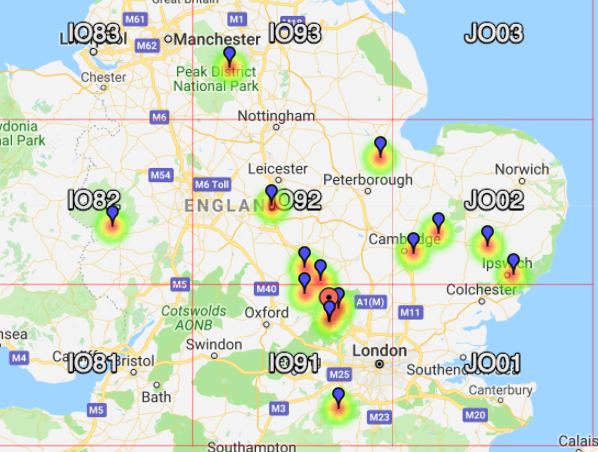 I was happy this idea worked out, now I’m looking forward to the Sporadic E season starting so I can really make use of this dual band Moxon. This was a bit of an experiment, but I guess the idea isn’t too different to a multiband Hexbeam.

I’m sure there will be follow up blog posts on my exploits on Sporadic E through the summer, especially using FT8 which I suspect will be extremely popular in the same way as it has set 2m on fire!