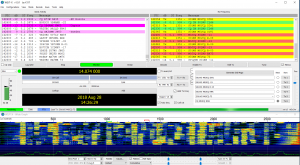 FT8 (or Franke-Taylor design, 8-FSK modulation) has taken the amateur bands by storm and for better or for worse, it’s changed the profile of activity since it launched in 2017. It doesn’t garner universal love from the amateur community, in fact it seems to polarise us; you either love it or you hate it. I fall somewhere in between these polarities and thought I’d write a bit about my experiences, what I like and what I don’t. As always these are my personal views and subjective, your views will probably vary.

I’m not new to digital modes, having used PSK31, PSK63 and RTTY quite extensively since getting licensed back in 2013. I even experimented with JT65 and JT9, within the WSJT-X suite, but it left me cold and the long QSO times were frustrating. So when I first started hearing about FT8 I was especially interested in the short 15 second overs.

The timing of FT8’s arrival is good, in that suddenly we have a new weak signal mode, that’s able to take advantage of marginal openings and all round bad conditions. FT8 will allow us to have QSOs on bands, which we would previously have thought as being closed.

I was recently able to catch S01WS (Western Sahara) using FT8 on 20m, which was a new one for me:

The QSO’s can be thick and fast, in fact during my first FT8 QSO I blinked and I’d somehow had a QSO! Gone are the old days of 7 minutes plus to work a station on JT65, now each over is 15 seconds.

3. Have QSOs while doing other things in the shack

The level of automation WSJT-X allows means you don’t have to be fully engaged with exactly what’s happening while operating. This allows me to take my eyes off the rig/screen and do other things; like check my emails, tidy the shack or write this blog post. I can’t do this with SSB!

This mode certainly makes you question what you thought about propagation. Paths on a given band, which would have previously been unworkable with SSB and even CW, become possible again.

Many are experimenting with this and dedicating their operating to bands which should (in theory) be closed at this point in the solar cycle. I read about a UK based ham who has been going for DXCC on 10m only, he’s just done it in over a year using FT8, which is quite a feat given where we are in the solar cycle. Isn’t 10m supposed to be dead?

You no longer need 400w and a massive HF Yagi to work DX, FT8 has certainly brought DXing to the masses and not just the elite few with KW of power, massive masts and an impressive 5 element 80m Yagi on top!

Let’s face it, trying to work DX using SSB with 100 watts and a wire is tough right now, little stations can’t compete with the serious DXers. Add to that the low point in the solar cycle and you can really understand why so many amateurs are keen on this mode right now.

Hams love new things, we like to experiment and play around with new toys. FT8 fills that role pretty nicely. WSJT-X has given us another new mode, which has sparked the imaginations of a lot of hams and as a result we’re keen to try it out.

I imagine if you’ve been licensed for years and the hobby had gotten a bit stale then FT8 could really reignite it for you and get you having QSOs again.

Avid DXers are also happy, they can try and work all the DX again on this new mode and the average ham is happy because they can have QSO’s at a time when sun really isn’t up to much. 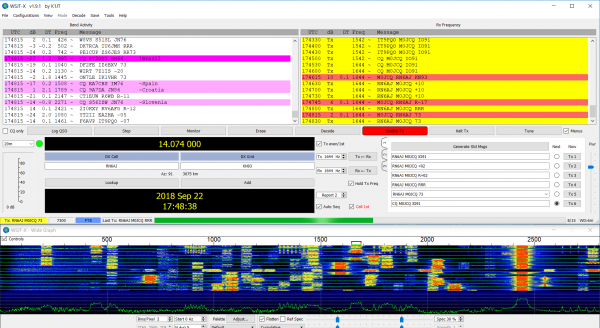 20m busy with FT8 activity on a Saturday

The Sporadic E season has changed a lot since the release of FT8. It’s been very popular on the 6m band, in fact the lack of SSB activity was really noticeable this year, all of which had been replaced by FT8.

But, what it has allowed people to do is work DX from further away than they would normally be able to, suddenly double/triple hop Sporadic E contacts become possible for not just the big guns.

The number of trans-Atlantic contacts seemed much higher this year and I’m sure this is in no small part down to FT8.

My experience of FT8 hasn’t been all good though…

I can’t get away from it, I personally find FT8 operating quite boring. I’ve tried to love it, but I still prefer SSB and the traditional data modes like PSK31 and RTTY. The formatted exchanges and automation all take some of the more interesting bits out.

You still need some skill to operate FT8 effectively, but it doesn’t require 100% concentration. This has allowed me to carry on operating while otherwise busy in the shack. WSJT-X just does its thing in the background while I check it occasionally.

FT8 lacks even the basics needed to have a human to human keyboard exchange, which even slightly impersonal modes like PSK31 allowed you to have. I think this is what makes it slightly boring for me personally. The strict timing and message structure take out any chance of chatting with this mode.

An alternative called FT8Call has been released, which allows keyboard to keyboard exchanges, apparently with the robustness of FT8. I’ve not used it, nor am I tempted, as PSK already allows for this.

Some stations have taken WSJT-X level of automation a step further. They’ve modified it to run completely without the need for you to be in the shack. Essentially allowing them to work DXCC while they sleep. I’ve seen one station around the HF bands, which I can only guess is doing this, or if not is sat there operating every time I happen to check any HF band. They are very high up on the ClubLog DXCC count this year and I’m not surprised!

I don’t understand this, sure you may earn some awards, but would you get any gratification from this?

FT8 is efficient, requiring only 47 Hz bandwidth per QSO. So imagine we have band allocations which are under commercial pressure, and people move to FT8 instead of SSB. Quickly it would seem to an outside observer, that our allocations are either under utilised or even worse; unneeded.

I think pretty much everyone has noticed the massive traffic change FT8 has had on many bands. It’s taken users away from SSB, CW and other data modes. Don’t believe me, check out the stats from ClubLog here. Will this last? Maybe not, it’s a new mode, people will lose interest and move back to traditional modes, especially when the sunspot cycle improves.

If everyone only operated FT8 how boring would it be? How far removed from skill would the hobby become?

Most contacts have become rubber stamp, 59 QRZ, type contacts, regardless of mode. FT8 buys into this and takes it a step further by only allowing you to have these basic exchanges.

Sure, you have to construct your station in the first place, but after that the operating skill is reduced.

My opinions on FT8 are mixed, it’s proven to be an interesting mode and made DX possible again, but I’m not excited by it. It just feels a bit like watching paint dry.

Will I continue to operate using FT8? I probably will to be honest, but it will become just another mode for me, like any other data mode.

What do you think? What have your experiences been?