How to Give Useful PSK31 Signal Reports 2

While using the PSK31 mode you often see people giving signal reports using the RST method (Readability, Strength, Tone). This was originally devised for Morse Code use, but has also widely been used for other modes like SSB (where Tone is dropped). Naturally many operators come from CW and SSB backgrounds when getting into data modes so the use of RST persists, even when better alternatives are available.

One of these much better signal reporting methods is to use RSQ (Readability, Signal, Quality). Below we’ll look at why using this is so much more relevant and useful for PSK operating.

First things first though… what does an RSQ signal report actually mean?

As you might have noticed all three signal elements are geared towards PSK31 to give an overall more useful signal report to your fellow ham which is far more useful than an RST report.

Readability makes much more sense when following the table above. A readability score of 5 means the PSK decode is 95% accurate and pretty much free of errors which is really useful for the other Op to know. For example if he’s given you a 5 you know you could possibly conduct a rag-chew, however if its 3 or lower you may be wasting your time.

I’ve completed some DX QSOs where the readability my side has been 2, this calls for a basic exchange and a rubber stamp style QSO! If you receive an R of 2 you will know only to send the essentials in order to complete the QSO. 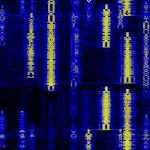 First of all note that numbers 2, 4, 6 and 8 are not used and the rest don’t relate to the traditional S-Meter reading either! This however relates to the strength of the trace in the waterfall instead, which is once again much more suited to PSK operation. Although the Strength rating has no bearing on the Readability of the signal, as most of us have seen weak PSK signals that decoded perfectly, which is one of the beauties of this mode.

It is useful for the other Op to know how well their signal is competing with others on a busy band. 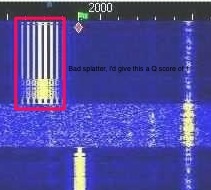 Rating the spectral purity of the PSK signal makes much more sense than supplying a Tone score. This always bothered me when using RST for PSK as it only makes sense for Morse operation (although nowadays you would hope that even rudimentary home brew QRP transmitters produce a clean tone!).

One of the frustrations of PSK operation is seeing another Op producing a signal which splatters all over the small PSK allocation of a band. It interferes with other QSOs and is a pretty antisocial thing to be doing, so i’d certainly appreciate it if someone told me my signal was splattering.

If i received a Q of 7 i’d know that i was very close to over-driving my amplifier and would turn down the power until i was given a 9. If i received a 3 or even worse a 1, i would be extremely embarrassed!

Hopefully you can see why providing RSQ reports is so much more useful than RST while using PSK. I’m certainly an advocate and can’t quite understand why this isn’t provided more often when reading articles about PSK31 operation.

Try it and give your fellow operator a more useful report that is tailored for PSK operation!

2 thoughts on “How to Give Useful PSK31 Signal Reports”