We’ve now crossed over into Laos, our fifth country on the trip, and have thankfully avoided all the trouble that was kicking off in Thailand.

Before leaving Thailand we visited the far north of the country, and stopped in Chiang Mai for a few days for the Thai New Year (called Songkran), this pretty much involved a full on water fight for five days to celebrate. So in good humour we armed ourselves with water guns and took to the moat side, and soaked and got soaked! The festival was a lot of fun, and most of the days were spent soaking wet, as people patrol town throwing buckets of water over each other, and obviously as a foreigner you’re a big target.

Here’s a photo of Chrissy, post water fight, and on the quieter side of the moat:- 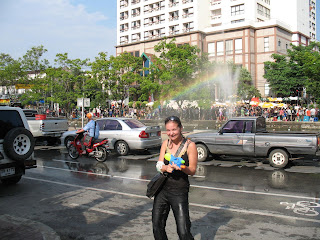 After Songkran we headed to the Thailand-Laos border and crossed over via Chiang Kong, across the Mekong to the Laos town of Houyxai. While filling out immigration forms at the Laos border we were sweating so much the sweat was falling onto the forms. It’s starting to get really hot now, in the real hot season before the Monsoons break.

We then floated down the Mekong river for two days on a slow boat, which took us through some amazing scenery through the interior of Laos.

Here’s a late afternoon shot i took from the boat:- 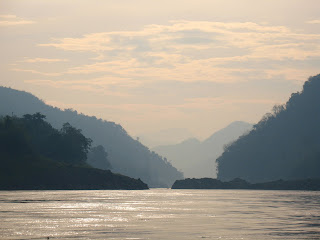 After two days on the most uncomfortable converted rice barge boat ever we disembarked at the second biggest city in Laos – Loung Prabang. This place is actually really quiet and laid back, and it says something of the small density of the population of Laos (around 6 million in all!). It’s got touches of French here mixed in with Laos architecture, and the whole place is a UNESCO world heritage site.

A picture of Chrissy on the river bank of Louang Prabang:- 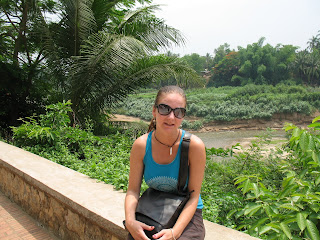 We had a relaxing day today and visited the Laos Red Cross centre where they offer an hour long Laos/Swedish massage and a herbal sauna for around 4 pounds! The best thing is all profits go towards the charity. We’re about as relaxed now as we’ve been so far on the trip!

After Louang Prabang, we’re heading into the remote Northern provinces of Laos to do some trekking among the hill tribes. After this we’ll be heading down south passing through many places, and within about 3-4 weeks time will cross from Southern Laos into Cambodia.

Someone explained to me today that the Laos PDR, doesn’t actually stand for the “Peoples Democratic Republic”, but actually “Please Don’t Rush”, this makes a lot of sense in this extremely laid back and relaxed country!