We caught a plane from Saigon up to Hanoi, where we stayed for a few days before going so Sapa which is a mountain town right on the border to China. The surroundings are stunning here and quite unique to anything else we’ve seen on our trip. The landscape has plenty of mountain slopes where terraced rice paddies are cultivated. We did a two day trek here into the local tribal villages (predominantly Block H’mong people), and came back with these photos:- 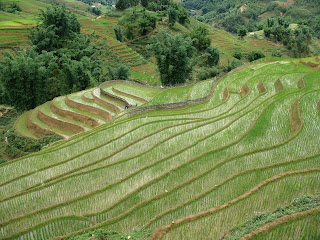 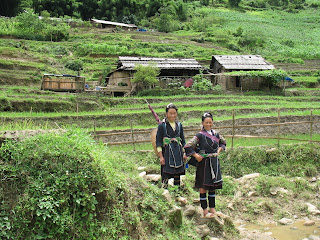 An unusual site for a westerner to see, a toddler riding an ox while eating sticky rice as if it was the most natural thing in the world (he seemed rather perplexed as to why we were staring at him!):- 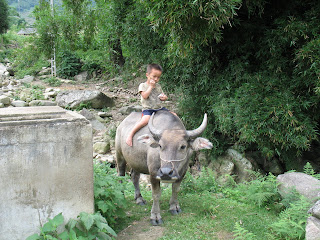 A dog trying to eat my bag while we rested our tired legs:- 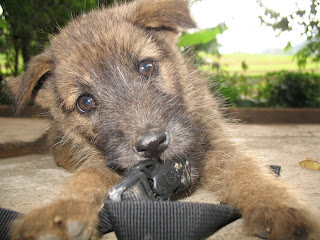 After arriving back in Hanoi after the trek we made a beeline for the world heritage site of Ha Long Bay and went on a three day tour of the place. It’s a bay surrounded by thousands of Limestone Islets and Islets rising out of the sea, we stayed on a traditional junk boat for one night. Here’s Chrissy at the front of the ship at sunset:- 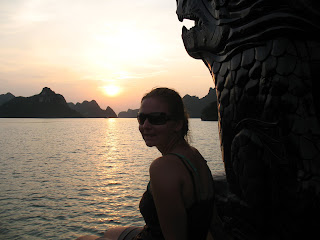 On the second night was stayed on “Monkey Island” in familiar bamboo hut beach bungalow accommodation, it was here that we spotted the largest spider of the trip (see if you can see the smaller spider behind it!):- 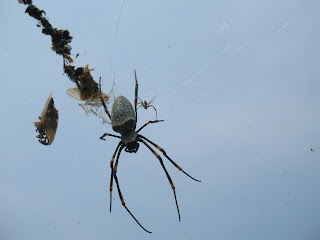 We’re now in the world heritage town of Hoi An, and have a fitting appointment at 7pm for our tailored suits we ordered earlier, get us!