We’ve had an exciting and mixed time since getting back from our trek.

I (Christina decided against it) took advantage of the word class paragliding from Pokhara and took the leap from an over sized hill with an over sized kite. Paragliding is an awesome experience, although not utterly serene, as you have a reoccurring thought that if these kite strings break i fall 2000 metres to my death. Here’s one photo i took of the view when i looked down (yes- those are my feet):- 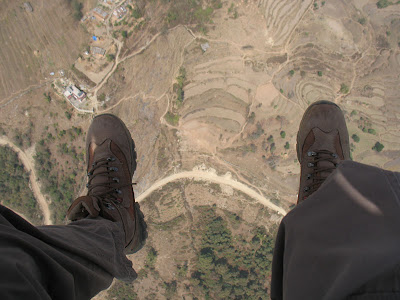 The 30 minute tandem flight gave really nice views of Pokhara and the surrounding Himalayan mountain range, and gave me an experience as close to be a bird as i’m ever going to get minus feathers!

On Friday me and Chrissy started a three day Buddhist meditation retreat, which was really nice and provided a good foundation in Buddhism and meditation.

We finally left Pokhara on Monday and travelled to a small traditional Newari town called Bhandipur. This town was ultra traditional and didn’t seem as though it had really changed in hundreds of years!

Yesterday was the Hindu festival of Holi, which is a big deal in Nepal and India, especially for kids, who throw paint and water at each other and hapless travellers like ourselves! Here’s a photo after a good mornings paint fight with the locals:- 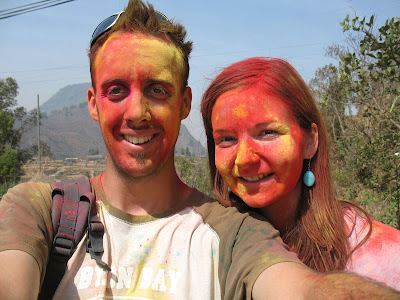 We of course armed ourselves with much powder paint to return fire, it was a very amusing morning. The laundry service are not going to be happy when i hand over my pain stained clothes though!!

Today we travelled to Kathmandu, and have 7 days remaining in Nepal before we fly to Thailand. I’m dying for some decent food, let alone some meat!!!