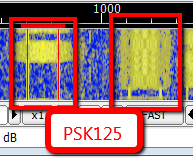 PSK31 was designed to be slow to allow for keyboard to keyboard QSO’s, but sometimes you feel the need for speed. You may only have a short amount of time to operate or you may have had one too many coffees, when this occurs you can turn to PSK63, PSK125 and even higher to the giddy heights of PSk250, PSK500 and PSK1000.

PSK63 and PSK125 QSOs tend to be completely macro driven and i’ve not seen a rag-chew take place using these speeds, i think this is purely because of the sheer speed of transmission, there’s no way you could type at the speed that PSK63 is sent, let alone at speeds higher than that! After all, the beauty of these modes is the faster speeds, you don’t want typing slowing it down to PSK31 speeds. The activity of higher baud rate PSK is a lot lower than PSK31 on the HF bands and i have only witnessed PSK63 and PSK125. Beyond PSK125 i think the activity mostly takes place on VHF/UHF where there’s more space available than the narrow digimode HF allocations.

Before you go exploring these faster modes, you should be aware that as the bandwidth of your signal will be wider than PSK31 it means the RF will not be as concentrated and subsequently won’t be received as strongly. PSK250 for example is 8 times the speed but 8 times the bandwidth of PSK31. To cater for the 9 dB loss with compared with PSK31, PSK250 needs 8x the power to realise the same S/R ratio.

PSK63 is relatively common on 20m/17m/15m so it worth getting to grips with. PSK63 is increasingly being used by special event/DXpedition stations because of the improved QSO rate that can be achieved over PSK31. If you have experience of contacting a DXpedition station you will probably recall how frustratingly slow it is to wait for your turn, PSK63 is twice as fast so this wait feels less painful. The maths is simple: the DXPedition (in theory) can make twice the amount of QSOs as a PSK31 operation could so its adoption is understandable.

If you wish to witness and carry out some PSK63 contacts, there’s the EPC PSK63 QSO Party 2013 contest coming up on the 17th of November, a perfect chance to get to grips with something a bit faster.

The screenshot below demonstrates a PSK63 signal in the fldigi waterfall:

It’s quite easy to identify a PSK63 signal as it uses roughly double the bandwidth of PSK31.

PSK125 QSO’s are four times wider than PSK31, but it is also four times as fast. It should be obvious that the faster the speed the more bandwidth that is required to support it. PSK31 is 31 hertz wide, PSK63 is 63 hertz wide and so on. This is something to remember because when our PSK frequencies are busy it may not be possible to operate these faster modes without causing interference to other PSK31 operators. The general rule is to operate towards the upper right hand end of the waterfall where PSK31 signals aren’t present.

Here’s a waterfall screenshot from fldigi that shows two PSK125 QSOs in progress:

Now we’re getting up to speed! PSK250 is used by PSKMail to allow access to email using radio frequencies instead of the internet, this is quite often used by sailing boats traversing the world who wish to stay in touch where ever they are. The speed of PSK250 is ideal for this type of message exchange as the messages are not typed live, they are pre-written and then sent at full speed.

So what do you do if you suddenly see a wider than usual PSK31 signal? In fldigi it is very easy and quick to switch modes, which normally means you can catch the end of a PSK63 CQ call or at least be prepared for the next PSK125 CQ call!

You can switch PSK mode in the bottom left of fldigi, just click where it says BPSK31: 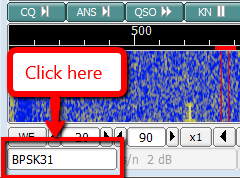 You can then simply click the appropriate mode you wish to use: 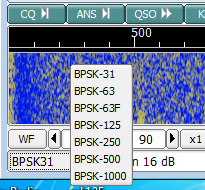 That’s it! You’re all set to send and receive the PSK mode you selected. You may have noticed the BSPSK-63F and BPSK-125F variants, what on earth are these? These are versions that include forward error correction which give you 100% copy. What’s the catch? Well the error correction makes the transmission/reception take twice as long, so suddenly your PSK63F mode is the same speed as PSK31 and takes up twice the bandwidth! You don’t often see these modes being used as a result.

Why not give these more exotic PSK modes a try? If you know PSK31 you can use the faster modes easily.