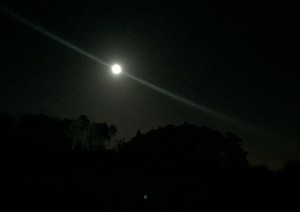 Yesterday I was up at the SOTA summit of Wendover Woods for a night time activation, despite the cold it was very interesting. I made 44 QSO’s in total including some very enjoyable rag chews.

After finishing a QSO with Michael G0POT, Tony 2E0TSA/P was waiting. He was one of the few other people crazy enough to be out portable at this time of year let alone at night!

He was only using 3W out and was a very good 59 signal into the summit so I decided to crank down from my QRO of 10W from the Elecraft KX3 and try descending power levels.

I first dropped down to 3W also, still the report was 57 so still some mileage left in that power yet, I cut this in half again to 1.5W still perfectly audible to Tony. Time to get serious and sub 1W, so i dropped it right back to 400mW, still no problem, so I only had one setting left to try, 100mW. Now I never imagined 100mW on SSB would go very far at all, but I was still a 53 to Tony (admittedly only located over in Bromley, London).

After this I cranked back up to 10W and we continued our QSO, during which a couple of other stations called in giving reports of my 100mW experiment, Dave G0ELJ in Birmingham and GW0WRI near Swansea also reported me as being perfectly audible. These guys had been listening in all along (you never know who’s listening!) and I was happy to get these reports.

This experimentation reaffirmed by belief that QRP power can be highly effective when band conditions are right, I regularly hit the States & Canada on 5w SSB from SOTA summits but this was the first time I’d experimented with sub 1W. I look forward to trying this again in the future!

Here’s the full log from the 3 hour activation (I couldn’t feel my hands at the end!):