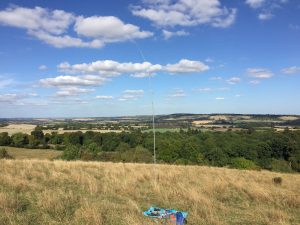 While out portable yesterday I tuned around 20m, keen to see if I could hear any DX during the Worked All Europe (WAE) SSB contest.

What I experienced, is I can only assume, Long Path (LP) Asian DX. Essentially the Short Path (SP) would have been within a path of darkness from East to West. Instead I think it would have been going from West to East, from Asia to North America and then over the Atlantic to G.

I heard Thailand (HS), Mongolia (JT), Japan (JE) and Indonesia (YB), all romping in with good signal strengths. What was interesting was that I couldn’t hear the multitudes of European stations they were working.

My setup was straightforward enough running the Elecraft KX3 and an inverted-V linked dipole (for 20m/40m/60m).

Disappointingly I wasn’t able to establish a QSO with any of them, despite multiple attempts. I don’t think 10 watts was enough to break the pile up 🙂 I did manage to work Cyprus and Asiatic Russia but it was hard work!

I filmed the various stations I was receiving, enjoy!