SOTA Activation in the Middle of a Lava Field (Señalo) 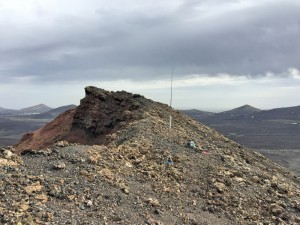 What exactly am I doing here again?

This SOTA activation demanded some dedication, Señalo (EA8/LA-011) is inconveniently located in the middle of a lava field about 3km from the nearest road on the island of Lanzarote.

What, only 3km? Yep, the distance is no issue, but the terrain here is something else.

Imagine a flowing river of lava that suddenly stopped and was frozen in time, imagine razor sharp black rock baking in the midday heat, with no flat surface as far as the eye can see! Where’s the path? Don’t know, but I reckon I can cross the lava field quite quickly… wrong! 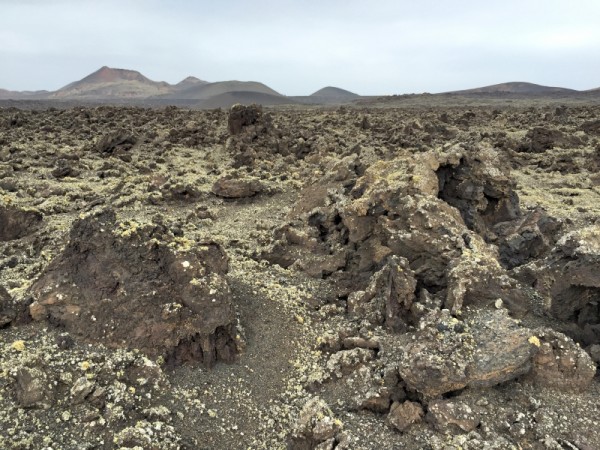 Lavafield – Tougher to walk on than it looks. Summit to the left. 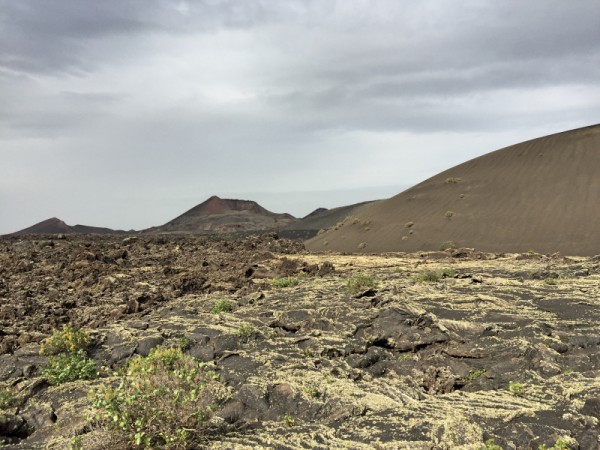 The summit in the distance

The 3km walk took me about 1.5 hours and was tough work during the midday heat. The rock you have to cover goes from razor sharp lava that will cut your hands to shreds and then transitions to loose volcanic rubble once you start the ascent. The ground is unforgiving on walking boots, clothing and any exposed flesh. The views are quite simply out of this world, the view and atmosphere is unlike anything I’ve encountered previously: 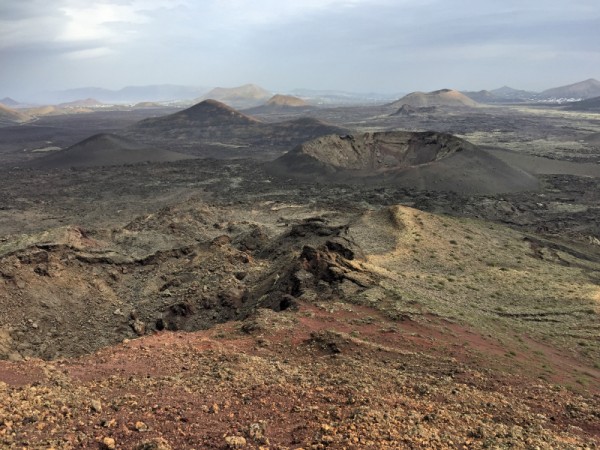 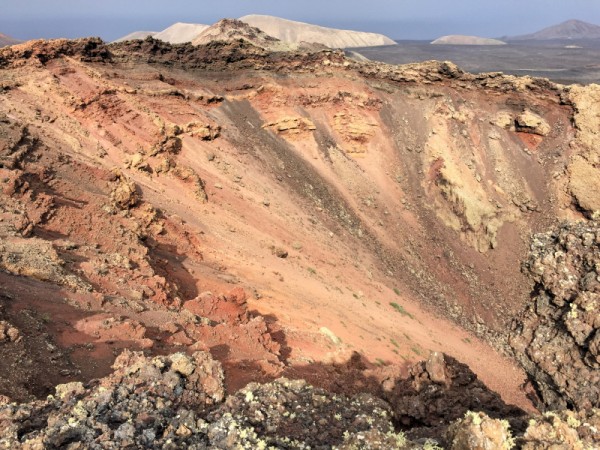 Looking into the crater of a volcano on the summit

Upon reaching the summit it doesn’t take any stretch of the imagination to understand this island is entirely formed through volcanic activity, you can see volcano cones right across the island and you are in fact on top of one too!

I quickly set up on top of this most unlikely of operating locations. I soon deployed the trusty SuperStick vertical antenna and set it up for 10m. This band had been very much open during my time in the Canaries so I had no reason not to kick things off here.

Quickly I also had the Elecraft KX3 setup and ready to go on 10m SSB: 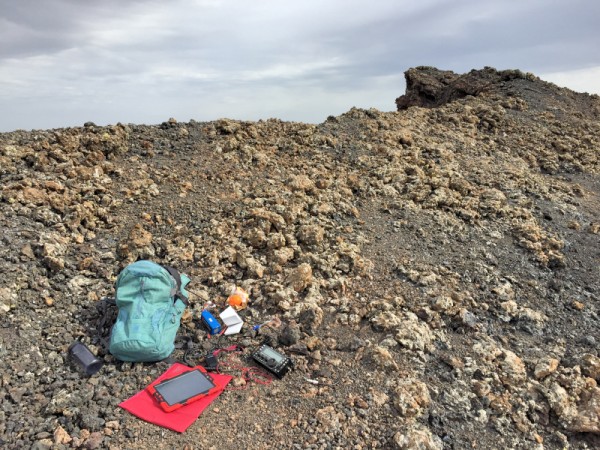 Setting up on top of the ridge 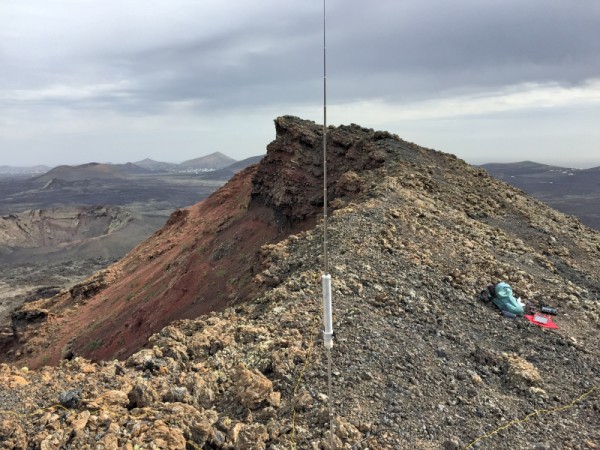 I spotted myself on the SOTAWatch website via SMS and soon enough a pile up arrived for a summit which had only been activated 3 times previously.

The calls came in thick and fast with Mike G6TUH getting himself in the log first of the bat (as usual!), I operated for 32 minutes and made 32 QSOs. I had no intention of leaving this quickly, but something very strange happened up here…

After about 20 minutes I started hearing static noise in my ear phones, kind of like QRN you might hear on 160m, this got louder and louder until at S9 I became a bit concerned. For some reason I touched the metal chassis of the Elecraft KX3 and quickly realised that the rig was live and gave me a nasty shock. At this point I left the pile up hungry and turned the KX3 off. I decided best to leave the whole setup for a while so it could bleed to ground.

After eating my sandwiches and pondering why I was even here, I decided it would be safe to pack it all away. Gingerly approaching the antenna I was relieved not to get another nasty zap and quickly set about getting off this strange summit.

What happened? Not sure, this had never happened before and has never happened again since! The ground up here is probably very poor so maybe a charge built up and was unable to bleed away to ground, I guess, but I still don’t really know?

Here’s the full log of QSOs from the activation:

Truly one of the hardest single SOTA points I have ever earnt! The effort to points ratio sometimes seems unfair when I think you can drive up to some 10 point SOTA summits. Would I do it again? Reluctantly! It was a very memorable activation but not always for the right reasons.

The walk back to the car was a tad easier, as from my elevated position on the summit I spied some kind of path in the distance. Upon reaching this path it turned out to be something amounting to a quad biking track which eventually led back to the road and made the going easier, if not quick or indeed pleasant.

This was my final and last SOTA activation on Lanzarote and I rewarded myself with a relaxing afternoon rehydrating with a few beers. 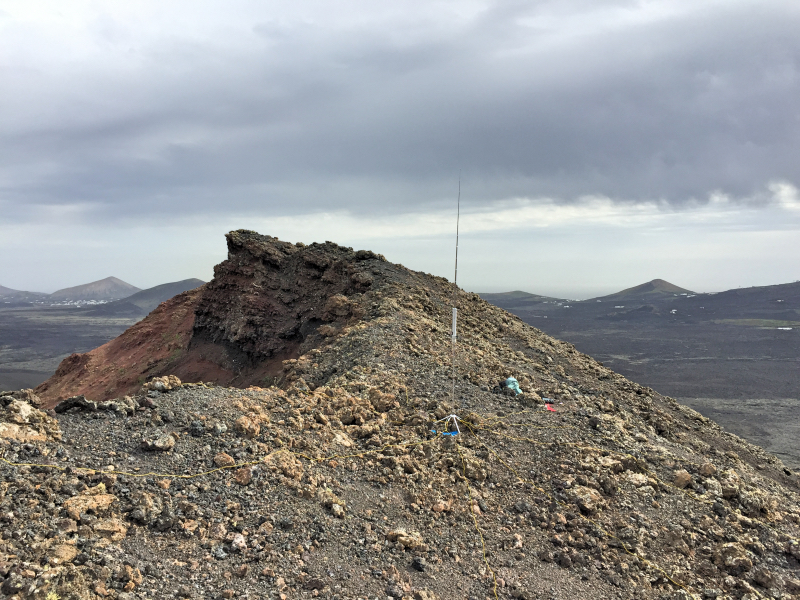 What exactly am I doing here again?