Have you ever activated a SOTA summit during a storm? No , me neither, until today! Turns out the storm even had a name, unknown to me then, Storm Desmond!

I had a day’s annual leave to use up at work so I decided to visit Mid-Wales, booked some time ago so I didn’t really have a choice when I saw the weather forecast….

Panorama of cloud drawing in during ascent 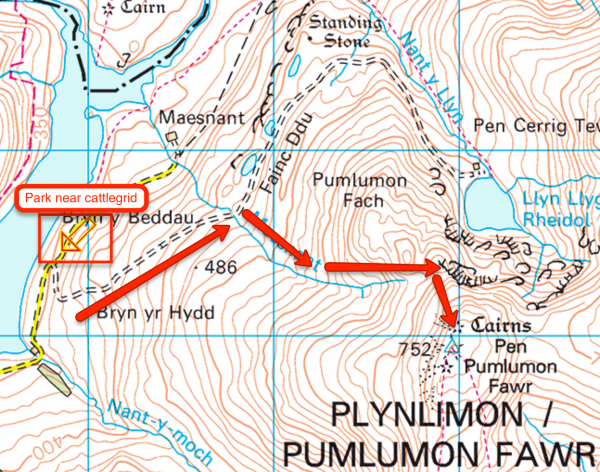 I stayed at a nearby hotel, arriving the night before and leaving quite early the next morning to start my lap of planned SOTA activations. I had originally planned to wild camp up here, but the previous weekends near freezing conditions had put me off this idea!

I started from the Nant Y Moch reservoir and parked just before the cattle grid at 768874. This was the last time I saw moderately ok weather this day: 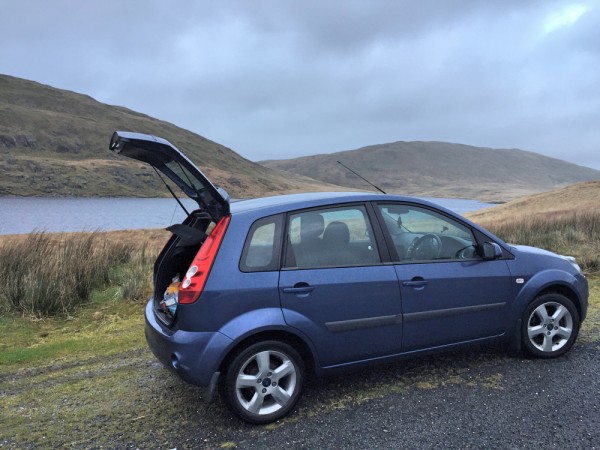 Parked Up at Reservoir 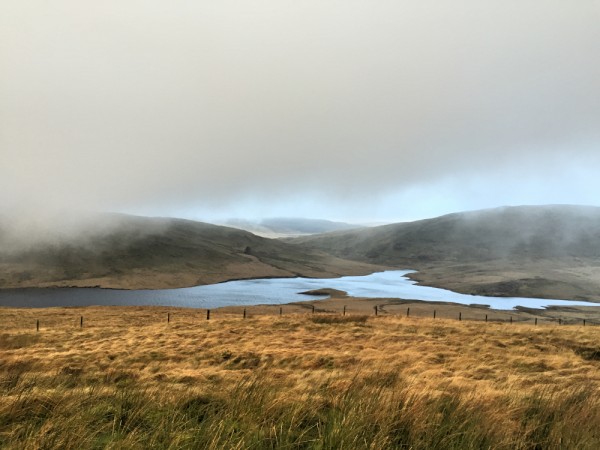 The last blue sky I saw this day!

The ascent was marked by fierce rain which gradually changed to a horizontal polarisation the nearer I got to the summit. This was naturally accompanied by wind that, from the wrong angle would catch the inside of your eyelid and flap it around. A new sensation and not entirely pleasent. At this point I was glad for my waterproof everything…. trousers, shoes, jacket and rucksack rain cover!

Upon reaching the 750m summit I realised that this wind wasn’t normal and this was confirmed when I could barely stand on approach to the trig point. In fact I almost didn’t activate this summit at all as the wind pushed me across wet rocks and I lost my footing. Thankfully I didn’t slip back and bang my head which could have happened easily in hindsight…that would have put a slight dampener on things.

The only sensible place to activate was from within the good summit cairn shelter just a few meters from the trigpoint (also valid for WAB trigpoint award -TP5480). This cairn was a real blessing because without it I’m not sure I would have been able to activate the summit. The wind outside would have swiped down any type of sizeable mast, so HF was most definitely out of the question, even with a dipole centre up at 4m I’m quite sure the whole lot would have come back down again. I was glad I carried up a more compact VHF option for just these situations.

This video hints at the conditions on the summit but doesn’t capture the strength of the wind:

I in fact had carried up two VHF antenna options, my trusty SOTAbeams vertical dipole for 2m and a new “flower pot” antenna which I built myself. Eager to try the new antenna for what it had been built for, I planted (get it?) it in between some rocks in the summit cairn. This was when I realised the RG174 coax run wasn’t nearly long enough for anything more than mounting in a rucksack! Darn it and back to the drawing board! The SOTABeams dipole it is then!

I quickly deployed the antenna and switched on the Yaesu Ft-270 handheld, straight away I tuned to the FM calling channel and heard someone calling, but only the tail end. I called them back and was soon straight into a Summit to summit (S2S) with John G4TQE/p on G/WB-017 Shobdon Hill. This was much to my surprise and frantically fired up the iPad to log the contact.

About this time the vertical dipole blew over mid-QSO due to the wind,  which was quite impressive as only 1m was sticking out above the cairn subject to the wind! In a rush I picked up the mast and held it up to complete the contact.

After I finished with John he QSY’d and left me the frequency. I called QRZ and Matt GW8XYJ/p came back and guess what? Another S2S! He and Allan GW4VPX/p were together and I worked them both up on Corndon Hill (GW/MW-013). Not only was this another two summit to summit contacts but also made Corndon Hill SOTA complete for me as I had previously activated it at the start of this year!

After this I moved back up to the calling frequency and MW3WSC came back to my call. We finished up and after being subject to wind and rain I was feeling quite a chill, so called it a day and braced myself for a rough walk back down the summit.

Walking back was interesting as the wind was now behind me and every time I would start to jog down (after loosing my footing) the wind would catch me and make it hard to stop… Not good on a steep decent!

Soon enough I got to lower ground and the wind subsided. 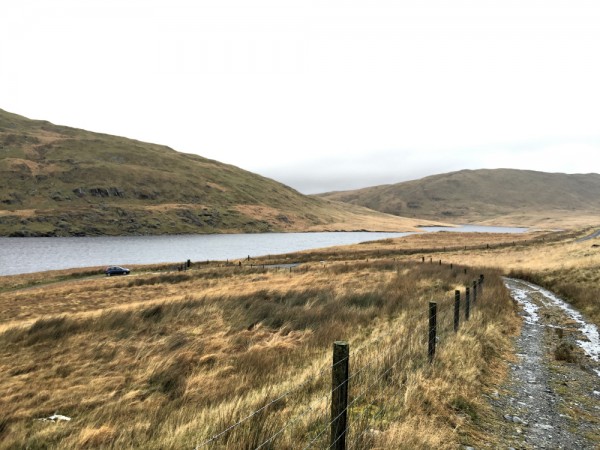 Returning back to reservoir after activation

Did I anticipate such a brutal activation when I planned this from my warm house in England? No! Would I activate it again under the same conditions? No! That said I’ll probably look back with fond memories after the pain of the wind and rain combo has subsided!

I’m sure the views from up here are spectacular, but the summit was in heavy cloud for the entire time I was up here. The reward was 6+3 SOTA points, three summit to summit contacts, a SOTA complete and some hot soup back at the car.

Maybe I need to reconsider what I do with my valuable holiday time….

One comment on “SOTA Activation of Plynlimon During Storm Desmond”