This was to be my third and final activation on La Palma and with this being the third 10 pointer in the last three days my legs were a little sore!

The trail up was clearly marked and well trodden and was a delight to walk, starting at around 8:45am and arriving on Bejenado by 11:45. The walk was the most scenic of the summits on La Palma, with magnificent views back down to sea level. 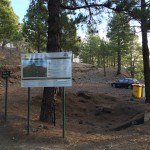 The car park at the base of Pico Bejenado 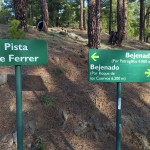 Which way to go? I went left! 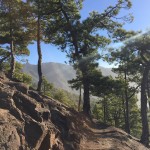 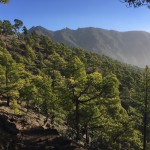 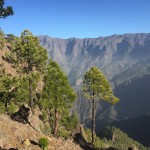 View across the Caldera 1 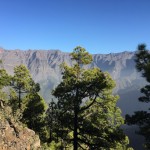 View across the Caldera 2 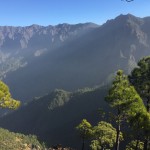 View across the Caldera 3 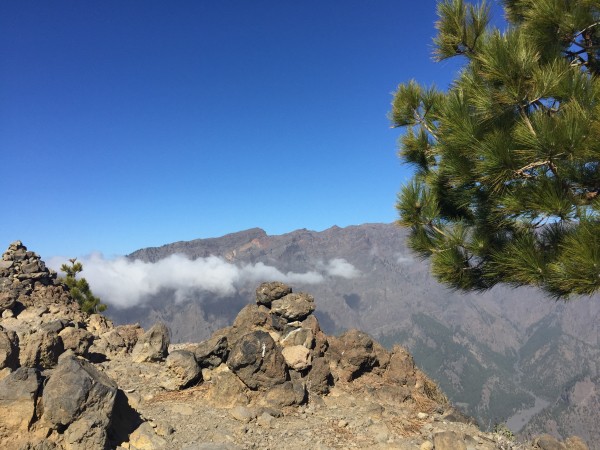 The view from the summit is undeniably stunning, with a view onto a ridge that runs right around hemming in a caldera that goes a couple of km’s across and probably about 1 km straight down!

I set-up the station about 15m away from the summit cairn, after adding an obligatory rock to it, this way I’d be away from the other hikers who wanted to admire the gorgeous views. 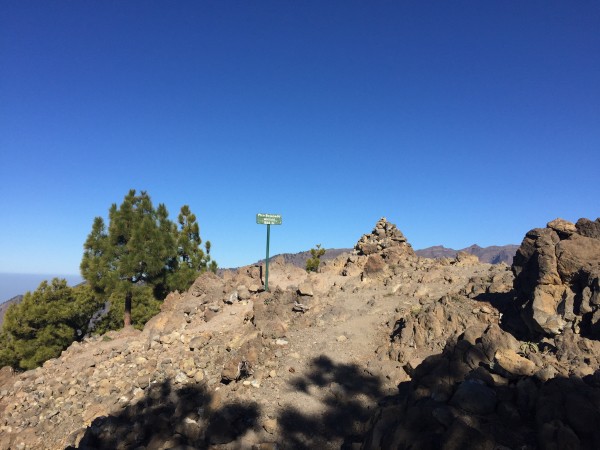 The view into the caldera made me watch my footing while setting up the vertical and radials. This summit saw me once again deciding it was much safer to hastily throw some of the radials out (& down!) the slope towards the caldera rather than stake them out carefully and risk a deadly 1km fall down into the caldera.

On Tenerife I got talking to a German walker and he told me that you can walk through the Caldera and that a couple of years ago two very experienced hikers drowned after heavy rain and the resulting torrent of water coming down into the caldera… I have no reason to disbelieve this!

After setting up, I got started on 20m. Not a band I usually select (not sure why!), but I had noticed this band had never been used before on the summit, so decided to try something unique. The previous activator EA8/M1NNN/P had noted bad wideband QRM on 17m and he suspected traffic radar would make activation on 20m quite tricky. I was relieved to find no QRM during my extended time on the summit and can only imagine the problem has now been fixed.

Here’s a video showing the hike up and some of the QSO’s:

Guru (EA2LU) was the first in the log after an SMS spot was sent, followed shortly after by Karl (M3FEH), then came another 14 QSOs on this band, with William (W1OW) catching me by surprise on this band and then CT9/OH2BTB/P over on the island of Madeira.

Disaster struck about 10 minutes into the activation when my iPad overheated on the sunny summit and refused to turn on. Suddenly my primary method of logging had failed me for the first time on a summit. I popped the iPad into the rucksack to cool down and got the notepad and pen out for some traditional old-fashioned logging. This proved to create an admin overhead when I descended and had to manually type up 75 QSOs from the paper log!

Happy I had activated the new band of 20m I moved on to the trusty favourite of 10m and after an SMS spot Bill (G4WSB), Mike (G6TUH) and Don (G0RQL) quickly made it into the log. Peter (G4ISJ) made for an interesting QRP contact as he was running just 5w to my 10w. EA5YI almost blew my ears off with his 1kW and beam. Then I scored another North American hat trick with Martin (W6UB – Tennessee), Brian (N2BTD – NY) and Garry (KF5VDX – in Texas, in his car on his morning commute!) making their way into the log.

Later into the activation I tried 17m & 15m, the latter was by far the better band with a number of state side contacts and 42 QSO’s in a row.

I spent an extended session on this summit because the QSOs were flooding in, the view was spectacular and the wind none existent. I was also soaking up the sun, which was a concern as after applying some sun lotion before leaving the car in the morning I had subsequently forgotten to take it with me to the summit! In the end I scrounged some off an English couple who came to the summit, incidentally they were the only other English people I encountered on La Palma, it seems the island is famous in Germany for it’s walking but not in England, or is that because it lacks any prominent tourist infrastructure (in the shape of tacky hotels, all you can eat buffets, English bars etc…) or indeed because it’s beaches are almost non-existent. I’m not complaining as La Palma was the perfect antidote to Lanzarote and Tenerife where parts are truly ruined by mass tourism (except the summits – they were mostly stunning!).

Pico Bejenado was my favourite summit on La Palma and the operating conditions were perfect.