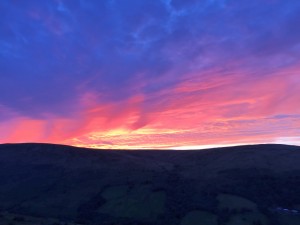 Lovely Sunset from the car park at Fan Nedd

Fan Brycineog – Wow! This activation was a real experience! I arrived at the base of Fan Brycheiniog at 11pm after activating another 4 summits in the area on the same day (13th August).

I carried a large rucksack with everything I would need for the night and my 35 litre rucksack with radio equipment. I walked for 45 minutes from the car parking spot using my head torch and Garmin GPS to navigate.

The path (fortunately) is pretty simple, it’s almost a straight line, the only challenges were the multiple stream crossings and the fact I was very tired after walking all day activating 4 other pretty substantial summits. I had to stop a number of times and unload both bags to rest as the uphill trajectory and heavy load was taking its toll.

GW/SW-003 – Fan Brycheiniog – 802m, 8 points
Latitude: 51 52 56 N, 3 42 30 W
Grid Reference: SN825218, QTH Locator: IO81DV
Parking: Park at SN855223 (N51:53:17, W3:39:52) on the side of the minor road where there is a pull-in for at least three cars.
Walk:
The route is basically a straight line to the southern end of Llyn y Fan Fawr with minor detours to cross streams. After the camping spot the path climbs steeply up the escarpment to the col where it turns right and up to the summit.
Trig: TP6568 – Trescastle
WAB: SN82
VHF: Great takeoff – more 2m contacts than 40m contacts for previous activators
Wild Camping Spot: From the southern end of the very picturesque Llyn y Fan Fawr which is a popular spot for wild campers. You can camp right at the lake edge!

I arrived at the lake edge of Llyn y Fan Fawr tired, sweaty and hungry but happy that I had found my camping spot for the night. First mission was to change T-Shirts, as mine was soaked through and the night chill was taking hold. I then proceeded to setup the two man tent on some flat ground near the lake edge. With shelter and bedding sorted out I started cooking a tinned curry for my evening meal, it was 11:30pm before I ate, but boy it was good. I enjoyed it with a beer while watching the Perseids meteor shower and thoroughly chilling out.

After quite a good nights sleep I woke up at 7am and opened the tent to a glorious lakeside view which I’d been denied the night before when I first arrived. 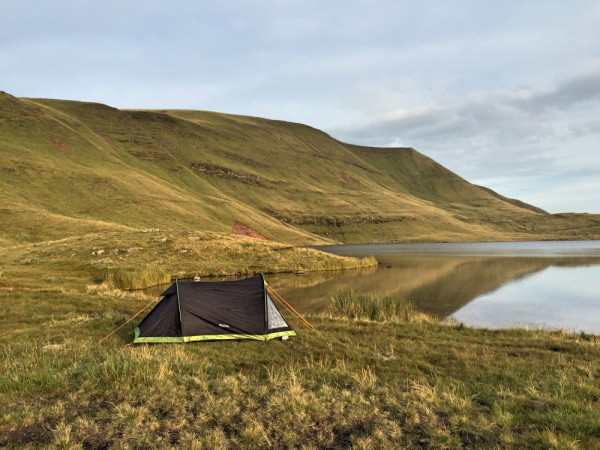 This is where I woke up! It was more beautiful than I had imagined! 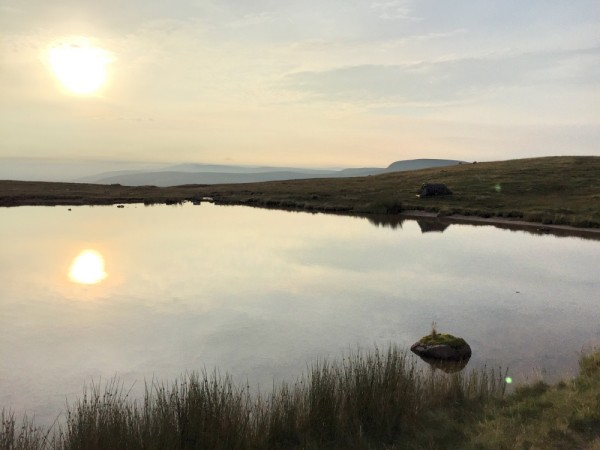 Sun rising over the lake

Soon enough I had the gas stove on cooking up a tinned English breakfast, not a taste sensation but necessary fuel for the walk ahead! 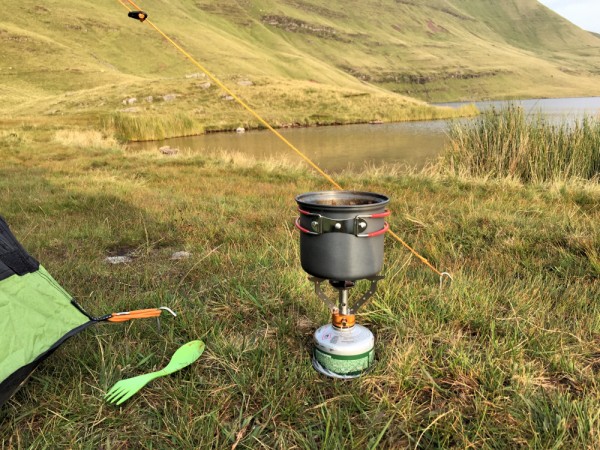 Cooking breakfast before starting the ascent

After the farmers turned up to heard their sheep I decided it best to pack everything up and make a swift exit. I’m not sure this is private land and I think they just graze their animals here and come to tend them every couple of days. Either way I cut short my initial plan of leaving the tent setup next to the lake while I go up and activate the summit. The main problem being that I now had to carry my big rucksack up the summit alongside my smaller bag carrying the radio kit.

The climb from the lake is very steep and this soon got the blood pumping around my system! Half way up I decided to ditch the big rucksack behind a rock to make the going a bit easier. 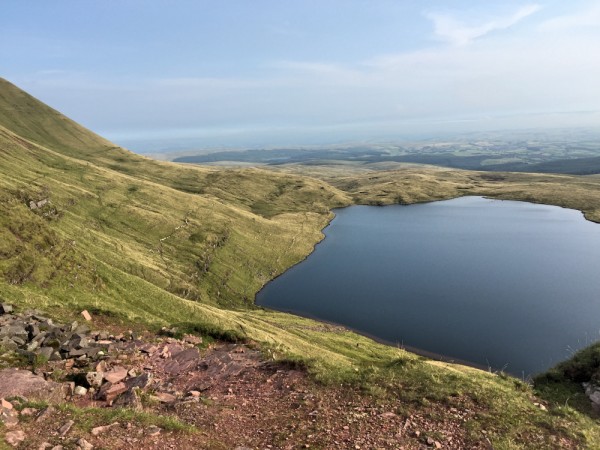 Views back onto the lake from halfway up 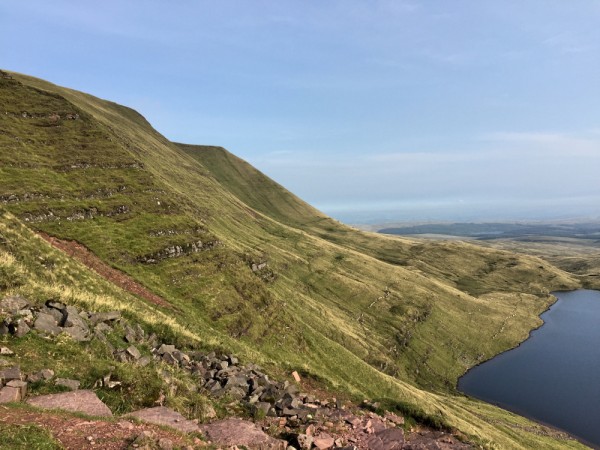 With the load significantly lightened I got to the summit in no time. Total time of ascension from lake was about 15 minutes and one pint of sweat. 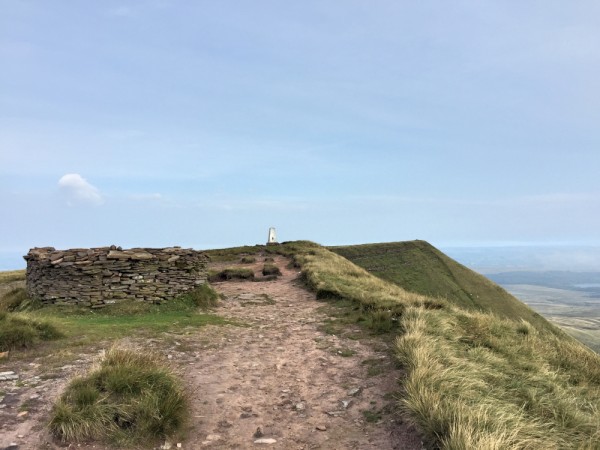 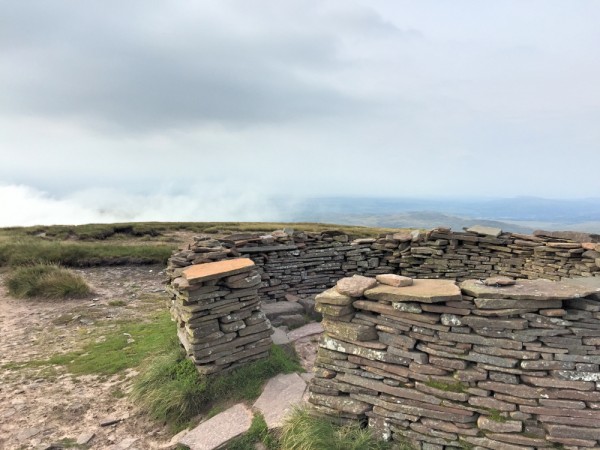 This is the lovely well built cairn on the summit

The top of the summit is marked with a trig point and summit cairn and on my visit very strong wind. This was matched by some incoming low cloud which was initially lower than the summit but then climbed up and swiftly engulfed the summit, lowering the temperature by a couple of degrees. 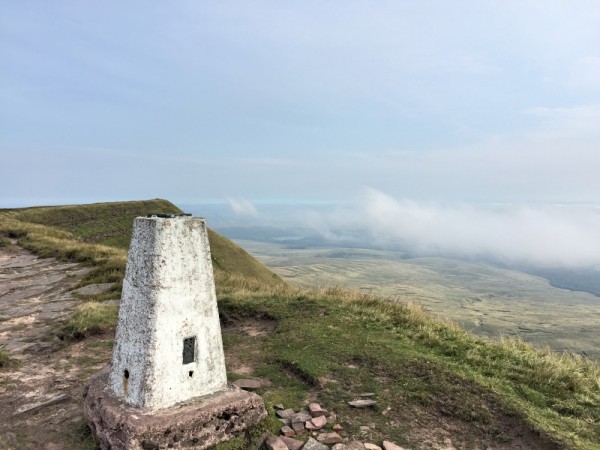 The trig point where I chose to operate from 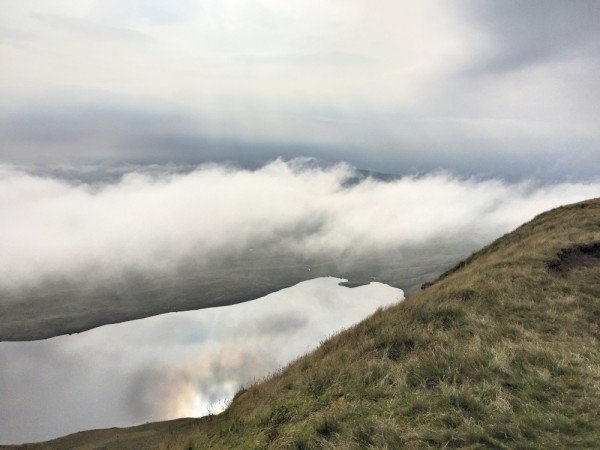 Oh no! Incoming cloud about to engulf the summit

I wanted to activate this summit using 2m FM but chose to put up a better antenna than the vertical dipole I’d used for all 4 activations the previous day. I had carried up a homemade 2m Moxon which would provide much more gain (~11dBi) and some directionality to match. This would maximise the 5w out from the Yaesu 817. 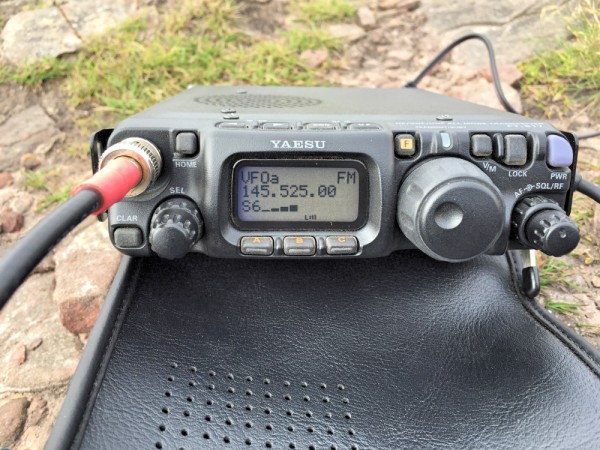 I strapped the Moxon to the mast in a vertical polarisation for FM. Soon enough I had this 4m in the air with the mast strapped to the trig point. Getting this to stay put in the strong wind was a bit of a challenge! 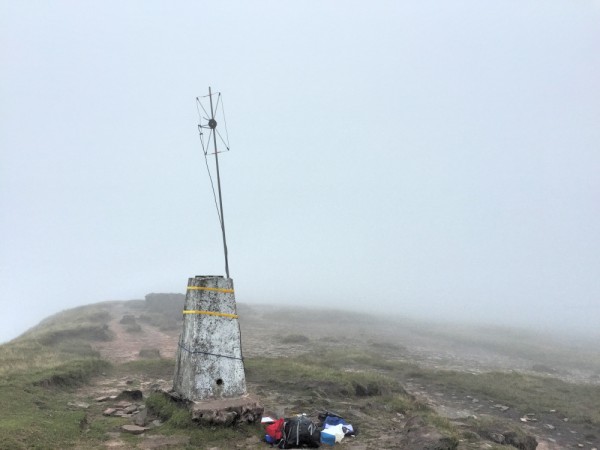 I posted a SOTA spot from my phone and started calling CQ. Don G0RQL was the first in the log and a good signal from Devon. He said he couldn’t always reach activators on this summit so seemed like the Moxon was doing the business. Next in the log was Jim EI9GLB, now I’ve worked Jim a number of times on various HF bands but didn’t expect him to call in on 2m FM! This just goes to show what can be done from a high location, clear takeoff and a saltwater path across the Irish Sea.

My fourth contact was finally in the same DXCC with Terry GW4TGT calling in from IO71MQ Pembroke Dock. My last contact of the day was with Rod from Hereford City, I had worked Rod while he was also in South Wales the previous day and caught him for three summit to summit contacts. He had since driven back to England and called in from his home QTH In Hereford City.

After this I decided to pack up as the weather was worsening and didn’t look like it was going to get any better. I was pleased with the difference that the Moxon had made with 7 contacts across 3 DXCC, surely that doesn’t happen very often under flat conditions on 2m FM!?

Once I reached the car I drove back home via Wentwood summit (GW/SW-033). This activation will remain in my memory for sometime, primarily down to the adventure of it all rather than the 30 minutes spent activating the summit. 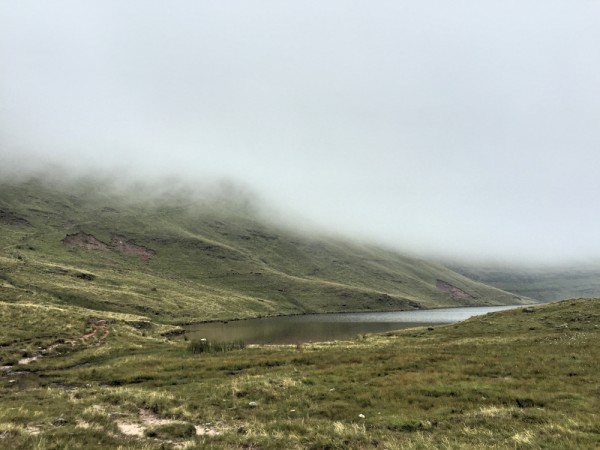