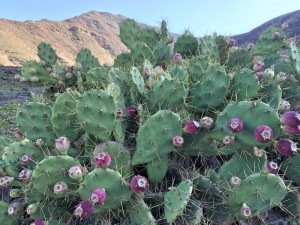 Cacti characterised the first two activations, you need to watch where you sit!

During my visit to the Canary Islands back in January I spent some time on the volcanic island of Lanzarote. While here I activated all the possible SOTA summits.

On one of these days I tackled 3 summits and here’s the report.

Equipment for the day was my Elecraft KX3, SuperStick vertical antenna, iPad for logging and about 5 litres of water!

This was my first summit of the day and conveniently you can park on the same dirt track off the main road for this and  my next summit (Pico Redondo – EA8/LA-007). You walk up the switchback route until you get to a goat farm, then you can either go left for Pico Redondo or right to Hacha Grande. I chose to go to Hacha Grande as it was further away and I still had lots of energy!

The walk up is easy enough, there’s a faint trail you can pick up that goes up the ridge of this summit: 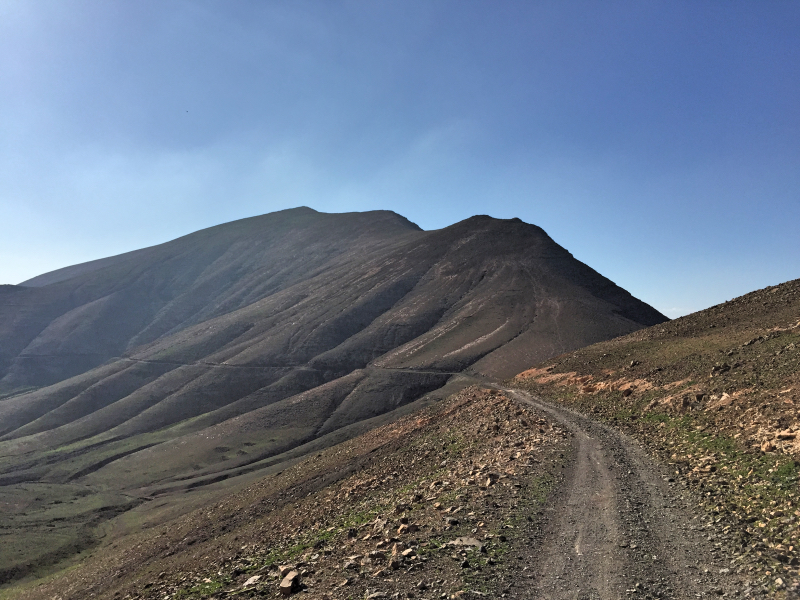 The view onto Hacha Grande

The way is marked by rock piles, just follow these and eventually you get to the summit which is marked by a concrete post trigpoint.

While setting up a trail runner arrived as well, impressively he’d run up! He was the only visitor I had on any summit this day. 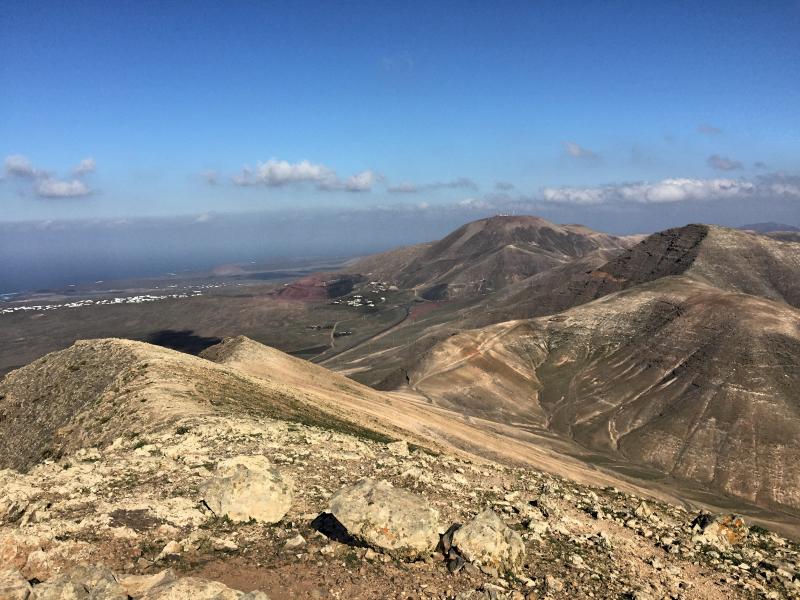 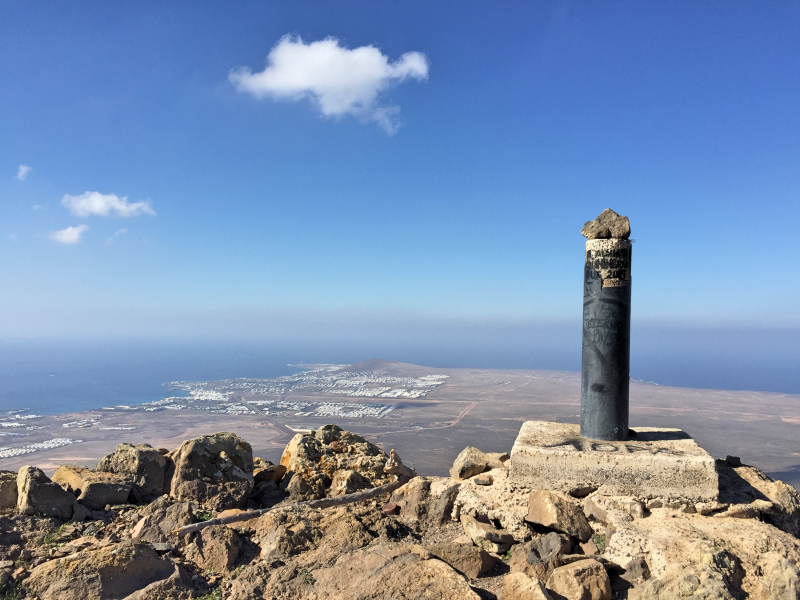 As I was sat there setting the Elecraft KX3 up, two lizards came right up to me, they were black with flashes of turquoise on their side, quite beautiful and very friendly: 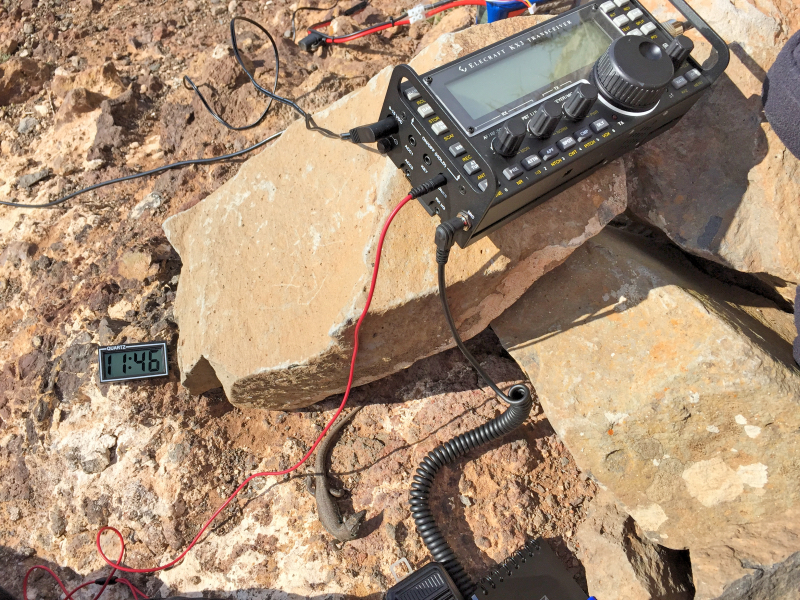 Spot the Friendly Lizard? Tip: Look near the mic cable

After spotting myself on 10m the pile up quickly arrived with Bob G3VXJ being the first in the log. It soon became apparent that EA8 to G was in good shape and 10m was very much open. G6TUH, M0IML, M0IBC, G0RQL, M0MDA, G4BLH, M6KVJ, M0NTC, M3FEH, M0TVU and GI4ONLY were all worked as well a number of other European chasers.

Highlights being CU3AA from the Azores and RA3PCI located in Central Russia. 26 QSOs were made within 32 minutes of operating, not time to hang around though, still another two summits to activate!

After packing up on Hache Grande I descended back to the goat farm and took the path to left (instead of back down the dirt track to the car) which would lead me right up to Pico Redondo. 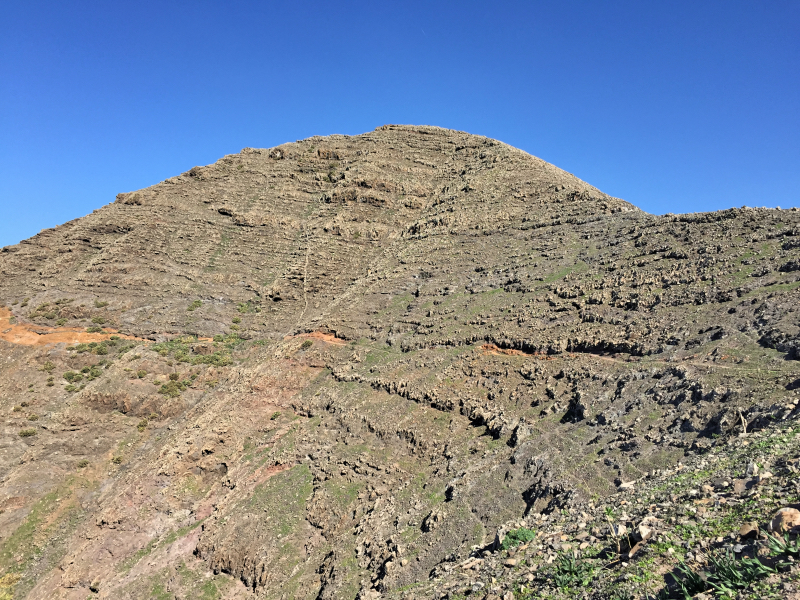 The view onto Pico Redondo

The ascent was a bit more tricky due to the loose rock and the midday heat which was baking me.

I quickly deployed the KX3 and vertical and put out a CQ call before spotting myself, Karl M3FEH must have been monitoring my previous frequency of 28.360MHz because he answered straight away. Once I’ve established a frequency is clear I’ll usually voicekey my KX3 and setup the spot on my phone. Karl beat me to it this time and spotted me. 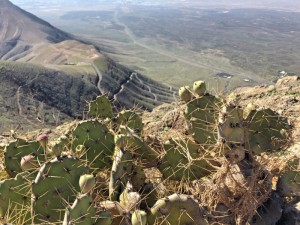 Cacti Waiting to Prick me as I setup the Vertical Antenna 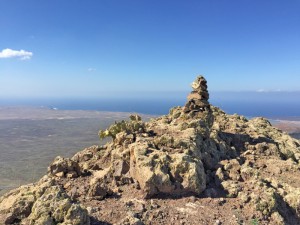 The Summit Cairn on Pico Redondo

I chose 10m again on this summit and this time North America had woken up and were active.

During my QSO with Brian G8ADD a US station popped up telling us to QSY, Brian quickly set them straight saying I’d been on frequency for the last 30 minutes and that they should QSY. I can only imagine that conditions had improved on 10m and now they were starting to hear me and vice versa or maybe they were just rude? Either way shortly after I cleared the frequency anyway as I needed to pack up and I still had another summit to activate.

This was the last summit of the day and to say I was tired was a bit of an understatement, to make things worse the summit itself is an eyesore. The commercial antenna installation covers a wide range of VHF and UHF antennas, I didn’t count them but there must be at least 50 here: 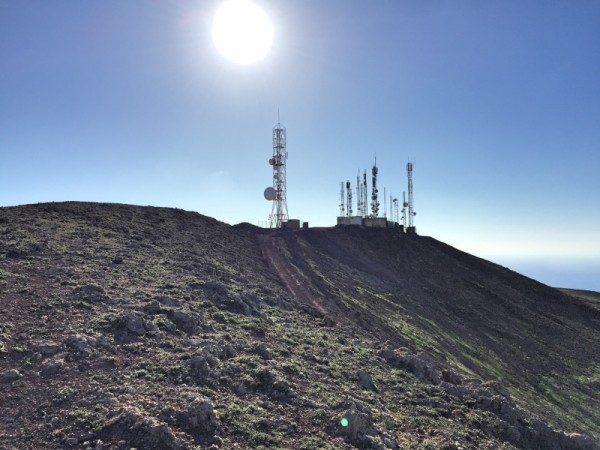 I setup a short distance away from the antennas and braced myself for QRM. I started on 10m to see what was happening so late in the day there, a good start no QRM and N4EX, DL1DVE, VE2JCW, N2BTD and NE4TN were worked in quick succession but it became obvious that 10m was closed back in the UK.

Next I retuned the vertical for 15m to see if I could hit the UK and after sending a spot I worked G6TUH who told me he couldn’t hear me on 10m earlier, only the US stations working me! I also managed to work 2E0YYY, G0RQL and GI4ONL amongst some other European chasers. 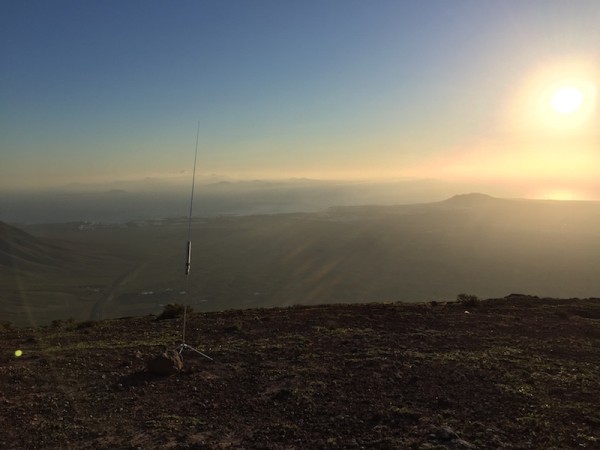 The SuperStick Antenna in the Late Afternoon Sun

After this activity died down I re-tuned the vertical for 17m, which is quite a tricky band to reach a low SWR with the SuperStick. Still, after a spot I worked G6TUH (again), G0TRB, WA2FON, 2M0NCM (who said he’d called me earlier on 15m but I hadn’t heard him) and G6ODU. A few other European chasers were worked as well. 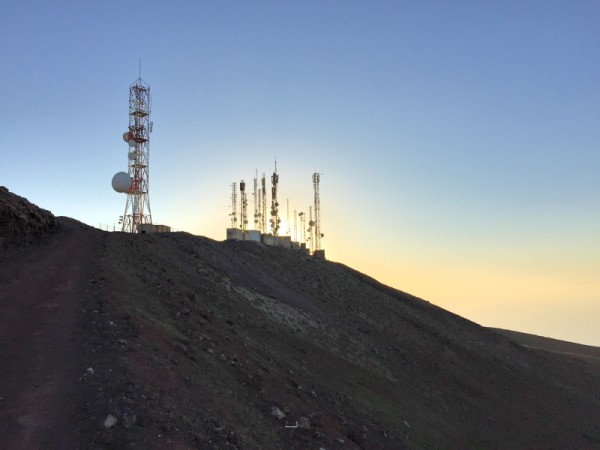 Leaving the Summit at Dusk

The sun was very low in the sky and I was done for one day. 23 QSOs were made in total. In hindsight 20m would have yielded a better QSO rate at this late time of day.

Three summits worked in one day, lots of walking, not much food, but a lot of fun! All three of these summits demanded proper walks and I was truly shattered after finishing the third. I retreated quickly to my hotel and sunk a few cold beers in a vain attempt to rehydrate (not recommended).