The land of smiles

We’re now 8 days into Cambodia, and so far we’re loving it!
After visiting Phnom Penh and it’s very saddening remnants of Pol Pots regime, we were glad to move on. S21 detention camp and the killing fields were a brutal reminder of mans inhumanity,the killing fields still have human bones and clothes rags sticking out of the ground along the path, really sad to think thousands were brutally murdered here for very little reason, other than a small groups zealously pursued “ideals”.

Our next stop was Siem Reap, the home of the ancient Khmer temples and the mighty Angkor Wat temple, which is the largest religious (Hindu) structure in the whole world. We spent three days exploring the amazing temple complex exploring them all by bike, cycling up to 40KM a day – a tiring three days! 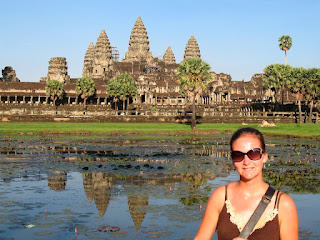 Yesterday we travelled by slow boat through some of the best scenery in Cambodia, to Cambodia’s second largest city (only a population of 140,000) Battambang. The boat journey normally takes around 3 hours, but at is it’s dry season the river is really low and the journey was an agonizing 8 hours on wooden benches, a screaming car engine, and 45 degrees of scorching heat – suffice to say every non-Cambodian got burnt!

Today we’ve been on a visit around the countryside visiting two temples and finishing up riding the bamboo train. Some enterprising locals have taken over an old section of rail track and built bamboo “trains” out of little more than metal train chassis, a motorbike engine and a bamboo platform, which looks exactly like this:- 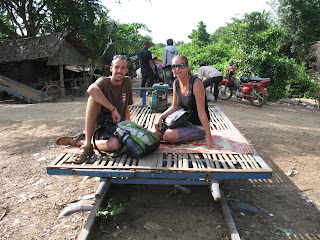 Now some people in more developed countries would call this majorly unsafe, and certainly it breaks every health and safety law under the sun, and we’d probably agree. However with more danger comes more fun,and this was certainly a lot of fun. You zip along through amazing landscape at 20KM per hour having to dismantle the “train” if something is coming the other way. One of the joys of travelling through developing countries is enjoying such (probably quasi-legal!) activities, where health and safety means nothing!
Tomorrow we head for Sihanoukville, which is in the very south of Cambodia on the coast, from here we’re going to explore some of the remote Cambodian islands, where paradise still exists relatively untouched by the ravages of tourism – we’ll see!
Here’s a scene which greeted us this morning while eating breakfast, Buddhist monks collecting alms, a scene so common in South East Asia it’s almost part of the fabric of the place:- 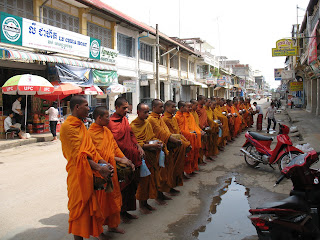