Trekking in the Himalayas and the art of surviving 3

We’ve just successfully finished our Annapurna base camp trek within 10 days and are now resting up in Pokhara, quite frankly thankful to be alive.

Based on our understanding and stubbornness we rejected offers of porters and guides for our trek and decided to do it independently, which is quite a decision when you’re both carrying 15kg backpacks for ~7 hours walking a day!

The trek started beautifully with nice warm weather, and a lot of climbing up and down hillsides at relatively low altitude, four days in we reached Machapuchare base camp (MBC) (at 3700m), this is the day the trek got serious as it snowed all day from 11am, this was on top of already deep snow. As the storm clouds had well and truly gathered we had to stay here for 2 days and 2 whole nights (with the effects of the altitude disturbing any kind of sleep!), we sat out intense snow with all day thunder and lightening right above us, and the very real risk of avalanche in the back of our minds. After the second night we woke up at 6am and to our delight the storm had cleared meaning we could do the last climb to Annapurna Base camp (ABC) (4130m!), this entailed endless falling into snow up to our waists and complete wonder as we could finally see all the 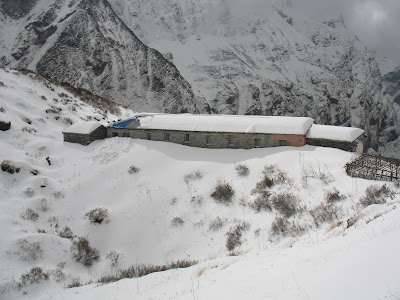 mountains that surrounded us.

This is a picture of the lodge we were staying in at MBC (snowed in!):-

The mountain range at Annapurna base camp is a 360 degree panorama of some of the highest mountains in the world let alone the Himalayas, we stayed at Annapurna II base camp, with the mountain behind us at 7,937m! Life is different at this altitude, you can’t breath very well due to the thinness of the oxygen, you’re surrounded by the most alien landscape and nothing really grows or lives, except for a group of backpackers well out of their depth! 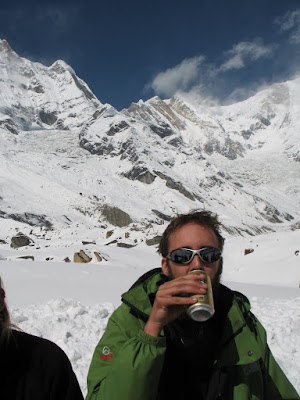 Reaching base camp was a massive achievement for us, and ranks up their as one of the most important things i’ve done in my life, let alone the most beautiful, and it also provided the biggest high (in both senses) of our lives. Here’s a picture of me enjoying a beer (well deserved!) at base camp. Alcohol has a much bigger effect at this altitude, so only one beer 🙂

After 11am that morning the storms came in again, with much more snow, thunder, lightening, and the constant rumble of avalanches. This is the type of situation that me and Chrissy haven’t faced before, the type of situation where you could very much live or die based on your decisions. Psychologically it’s quite tough, but we just had to sit it out and hope for the best.

At 6am the next morning we all woke up and observed that it wasn’t still snowing, we made the decision of getting back down at least to MBC if not further. We were the only people at ABC, so we had to rebreak the path down, which was filled in with deep snow, this was made only trickier by the chances of avalanches, and a big avalanche having already fallen over the previous route. We took it in turns to break the path, which involved testing the ground to feel for yesterdays icy path with sticks, we re-routed at times to avoid causing avalanches, most of the trek down was exhausting as you continually lost a leg or two to deep snow, sometimes you had to pull half of your submerged body from the snow to continue. We also had a guy with us who was majorly ill, either AMS or some parasitic stomach bug, who kept curling up in pain, and looked quite close to death. We took it in turnsto carry him down. After all this a trek which normally takes 1 hour took s about 3 hours of hardcore effort to get down to MBC. The ill guy had to stay at MBC as he was going nowhere, and some of his friends stayed to look after him.

Me and Christina decided to press on down and not risk getting snowed in again, but we both knew the next part was a high risk avalanche zone and should be passed before 10am, it was 9:50am! We decided to take the risk, as if it snowed again it would just become even more dangerous the next day. We essentially ran through this 2 hour trek, listening out for avalanches and moving even faster when we saw them starting near us. The ironic thing was this was some of the most beautful winter scenery i have ever seen in my life, but also some of the most dangerous, as a number of people have been caught in avalanches here. We trekked for a huge amount of time this day (~9 hours) without break to get out of the snow covered areas.

We finally reached a lodge that was out of the snow, and were thankful to still have our lives intact!

Michael Palin also did this trek for his Himalaya series, however he had 35 porters and guides, got dropped off 3 days into the trek, picked up from annapurna base camp (by helicopter), and didn’t have much snow to contend with. I’ve just read this section of his book, and he moans a lot about the difficulty of it, Michael you were lucky! As were the people we’ve met who did the trek prior to us, their experiences were very different, and a lot easier.

We got unlucky with some heavy end of winter snow storms, it was just the timing that was wrong, but now we’re safe in sunny Pokhara, i’m glad it all happened as we’re both still alive and we have a hell of a story about the time we went trekking in the Himalayas!