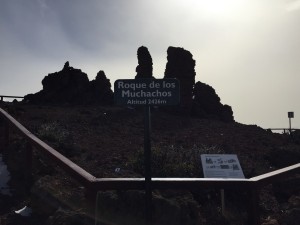 Roque de Los Muchachos (EA8/LP-001) translates as “Rock of the Boys”, named after the figure like rocks at the summit. This summit is a tourist hotspot due to the largest space observatory in the Northern hemisphere, it’s also the only summit on La Palma that you can almost drive directly to the summit without hiking some distance.

The drive up took about 1.5 hours from the hotel and was quite pleasant, but might not be if you get travel sick! The drive up was obviously very windy with hairpin after hairpin and a constant climb up passing patches of ice, snow, fallen rocks & driving through a cloud.

Here’s a summary of the activation:

I knew the summit would be busy when I got caught behind a tourist bus on the way up and I wasn’t surprised to arrive at the car park to find quite a number of people. The space observatory is spread out over some distance across the mountain ridge and I noted both optical and radio telescopes during the drive. The (I assume) radio telescopes were made up of what looked like hundreds of smaller mirrors in a satellite formation, quite other worldly! 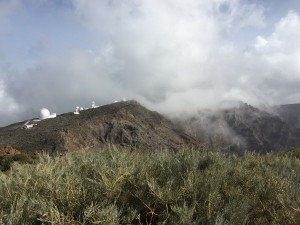 The space observatory at EA8/LP-001

The activation zone (N28° 45.215′ W17° 53.058′) was just off this path, meaning no tourists, luckily sheltered from the freezing wind & most importantly shielded from the telescopes. This last point is important because there are strict power flux limits on this summit so that us amateurs do not interfere with the observatory equipment. I did my calculations based on this page here, not an exact science as it’s hard to measure the effect of the rock I operated behind; shielding me & the antenna from the telescopes and the exact distance away from the nearest telescope (maybe ~300m away). A power limit within the 1 – 2.6w limit was decided upon, initially starting with 1 watt and if no officials appeared then I would crank it up to 2.6w later. 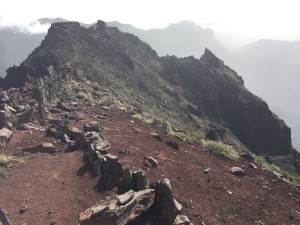 My activation location at EA8/LP-001

After setting up I appreciated how much warmer the activation zone was compared to the path on top of the ridge, no need for gloves or even a jumper, it was the perfect suntrap. The vertical drop off the edge kept me focussed when deploying the antenna & radials!

I chose to start on 10m, which is the first time it has been used on this summit, with 1w SSB, not expecting too much but hoping for the required 4 QSO’s. Mike (G6TUH) kicked off proceedings after my SMS spot, as he did on many other summits, followed by the Devon crew in the form of Don (G0RQL) and David (M6KVJ). I also bagged a S2S QSO with HB9AFI/P on Le Gibloux (HB/FR35).

After 8 QSO’s on 10m the callers dried up, I wasn’t surprised given the 1w and the rock limiting the verticals takeoff!

Next I moved down to 20m (also a first on this summit) and increased the power as far I could comfortably go… 2.6w, now that’s QRO! This netted a further 8 QSO’s, with Karl (M3FEH) kicking off proceedings using just 10w from his end. The most interesting one was with Pablo (EA8CVZ) who was also on La Palma. He confirmed my suspicions that there are many active hams on La Palma; the number of huge HF yagis & hexbeams are testament to this! 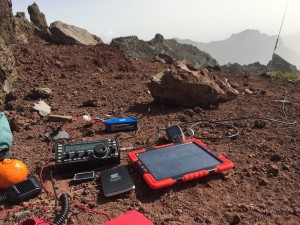 It was obvious that despite the 10 points on offer some chasers simply couldn’t hear me, resulting in lower QSO rates. Not to worry, I had comfortably activated the summit, but decided to try 15m to give a few more chasers a chance.

19 QSOs across 3 bands wrapped up the relaxed activation and I proceeded to pack up and get back in the car. I knew beforehand that this activation would be tough due to power limits, so I was happy for 19 QSOs and most importantly not encounter any irate officials with RF direction finding equipment!

This was always going to be a tough technical activation using SSB and my main hope was that the solar index would hold out and co-operate. I was lucky here and conditions across 10m & 20m seemed good for such limited power.

The two Summit 2 Summit contacts were the icing on the cake really and unexpected!