Work recently took me back to California, and specifically to San Francisco, which I’d not visited before. Naturally enough I checked the nearby SOTA summits to see if I could sneak in an activation.

Mount Davidson (W6/NC-423) seemed to fit the bill nicely, it’s easy to get to with public transport, not too much of a walk and has a large population centre across the Bay area, meaning a 2m FM only activation would be feasible.

This was primarily a business trip, so I wanted to keep my equipment to a minimum, so with this I decided on a 2m FM only activation. The next problem was that all my handhelds are locked to the European 2m allocations, and the calling frequency in the U.S. is outside of this (146.520 MHz). I knew that it would be possible to wideband my HT’s to work, but after research some were easier to do (and less destructive) than others!

Baofeng UV5R-TP – time to trash it?

After research it turned out my Yaesu FT-270 and Yaesu FT1D both needed a SMD resistor to be removed, while my two (rarely used) Baofeng HT’s could be widebanded in CHIRP, simply updating the firmware settings. I took the path of least resistance (pun intended) and took the two Baofengs.

I also checked that my 2m vertical dipole still had a reasonable SWR on 146.520, the analyzer at home showed it to be the same SWR as on 145.500 MHz. This was expected, but I wanted to confirm it really was the case.

After 2 days of sightseeing in the city, I decided to attempt the SOTA activation on the Sunday, so I took the bus from Lombard Street and settled in to the 45 minute journey (with 42 stops!). You can tell the type of neighbourhood in San Francisco, by the type of passenger that boards the bus; the neighbourhoods on this route are pretty family friendly! This was not my experience of all bus routes in the city though – don’t sit at the back of the bus is my advice.

Upon arriving at Laguna Honda Blvd & Portola Dr, I got off and started the walk to Mount Davidson. You start in a nice neighbourhood (Dalewood Way and Sherwood Court) and I found a little path between houses leading to the trail.

The walk up is through nice woods, and there was some lingering fog, leading to some good effects from the sun:

Sun streaming through the trees and fog

Upon reaching the summit I assessed the options, the very top was out of bounds as some filming was going on. I decided a little further down, where there was a clear space overlooking the bay area (although you couldn’t see it!):

My operating perch – the vertical dipole was not like that during operation!

I do love the natural parts of California! 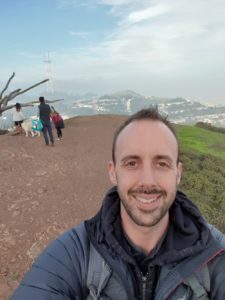 The author on top of the summit

I set everything up and sent the SOTA spot (via text message). I put out a call on 156.520 MHz and got an unexpected response straight away from Elliot K6EL, who had earlier seen my spot and had been waiting for me. He turned out to only be a mile away from me and had been up on the summit earlier!

After this things got a lot more difficult, and via relayed messages from Elliot it transpired I wasn’t hearing quite a few stations who were hearing me perfectly. I worked another 2 stations (Jimmy KF6QCH and Windsor W7FZ) after 30 minutes, but both very very weak and barely copyable. Something was up with my equipment, maybe I should have taken my trusty Yaesu HT’s after all? I knew the Baofeng receive performance isn’t all that great, but I should be able to at least hear stations that were receiving me at 59+20dB!

I was stuck on 3 contacts for quite a while, with Elliot giving me the running commentary on who was trying (unsuccessfully) to call me. Eventually I got Patrick N6PLM, over in Oakland, in the log after many attempts of trying to exchange a report correctly. Eventually Elliot confirmed it was a good 2 way contact and I had my 4!

I’ve had some hard 2m FM activations, but this one really was difficult and immensely frustrating. Especially as I knew many were trying to get me in the log. I had also tried switching HTs halfway but my other HT (also a Baofeng) seemed even worse than the first one. Maybe that narrows it down to the coax or possibly the SMA to BNC connector? Or both of the Baoengs are terrible?

Either way, I won’t be using this setup again in a hurry. But after some perseverance I’d successfully activated and got a point on a W6 SOTA summit!

I’ve been to California twice before back in 2014, just before I’d discovered SOTA, so it was good to come back and get one CA SOTA summit in the bag! Maybe I’ll go back out with work again at some point?

The kind of view you never get back in England!