Each year I’m sent away to Boston, MA on a company conference, this year I decided to take the radio and activate some of the nearby (well nearish) SOTA summits.

I’d planned with some likeminded colleagues to visit the White Mountains in New Hampshire, about 3 hours north of Boston. We’d arrive on Friday evening and would have the whole weekend to enjoy the delights of what turned out to be wilderness… with bears.

After landing in Boston we hired a Chevrolet Tahoe, which is by far the largest car (if you can call it that) I’ve ever driven. I volunteered to do the 3 hour drive north out of Boston which was interesting given the torrential rain, rush hour traffic and the large vehicle which barely fitted inside the oversized US lanes! 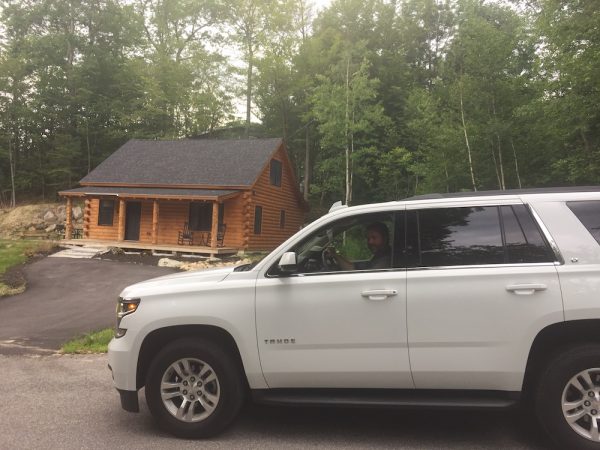 Mount Washington is the tallest mountain in the North East of the United States. The mountain is notorious for its erratic weather. On the afternoon of April 12, 1934, the Mount Washington Observatory recorded a windspeed of 231 miles per hour (372 km/h) at the summit! It’s also known for the “worst weather in the world”, we of course didn’t know this when we’d planned to climb the thing months before in a nice warm London office!

We started our ascent from the White Mountain visitors centre in Pinkham Notch, we chose to ascend via the Tuckerman Ravine trail, apparently only 4.1 miles but that undermines the steep ascent… 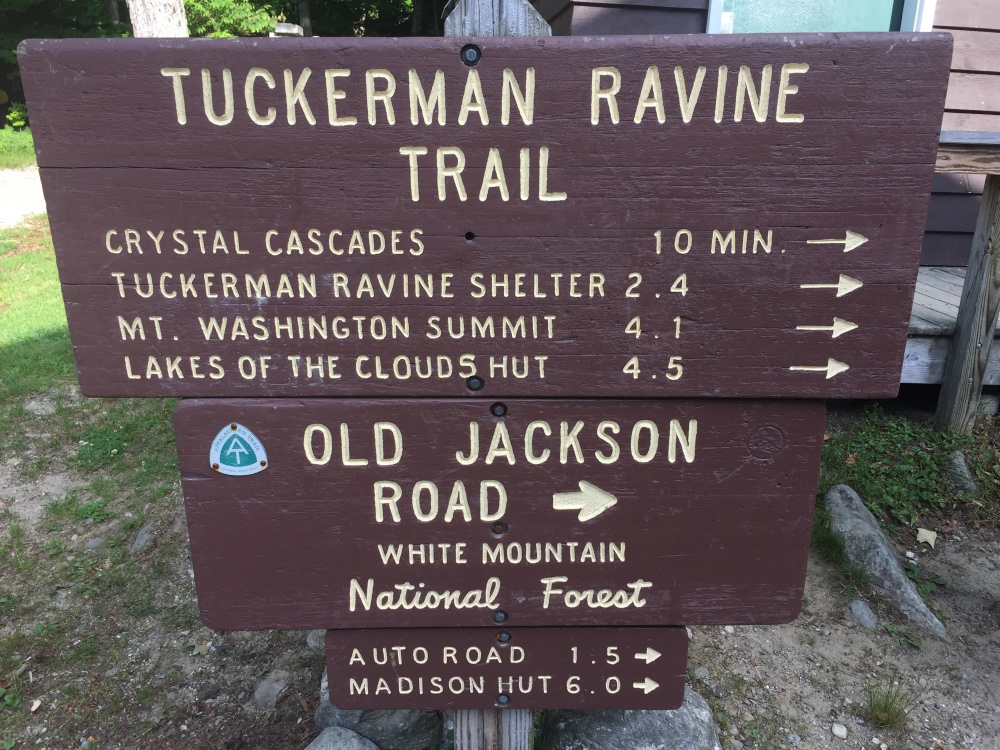 Picking up the trail head

The walk to the top took us about 4 hours, and every bit of the ascent was earnt, in fact there was very little in the way of anything flat. The walk took us through stunning pine forest until we got above the treeline and had to ascend across boulders 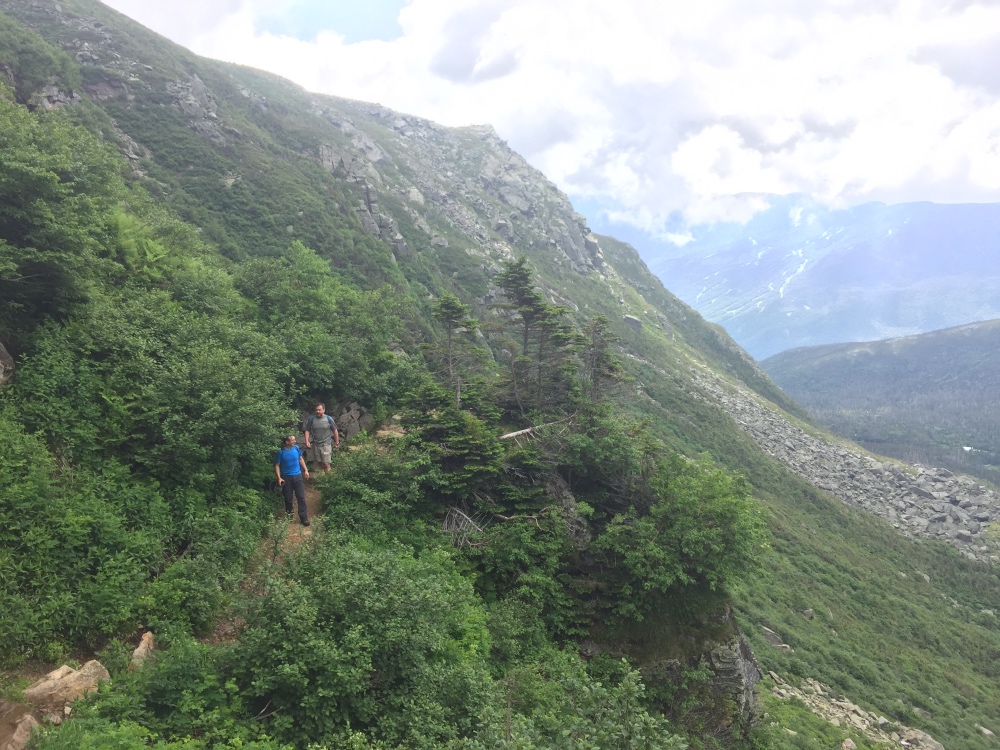 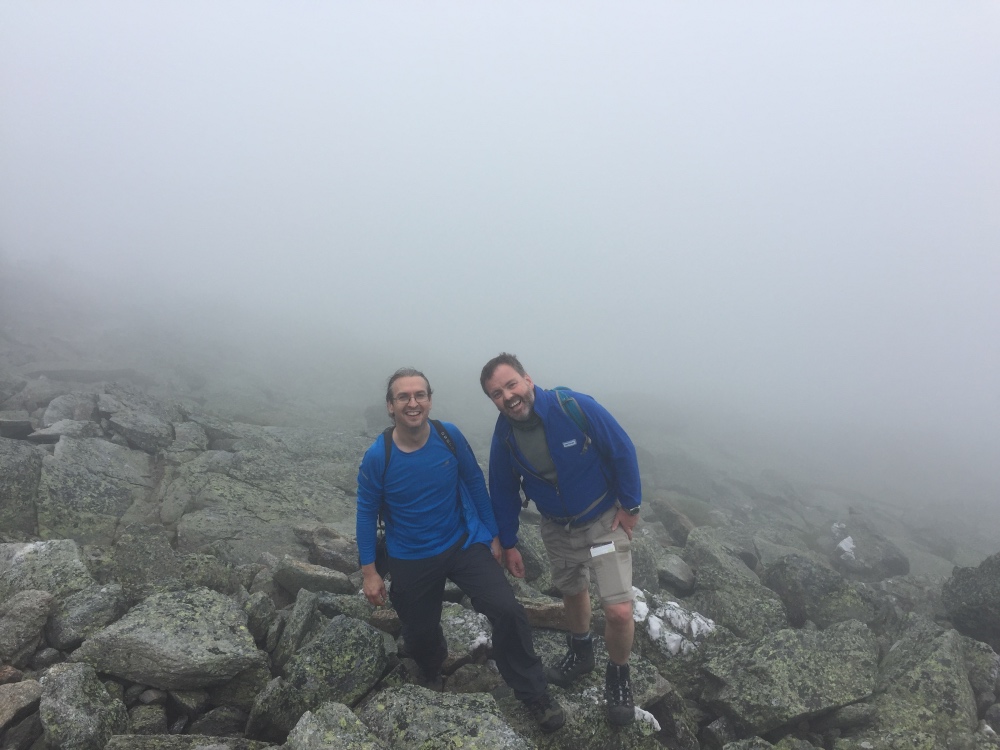 What a view! This could well be anywhere in Britain with this kind of thick mist!

After checking the WX the day before we were expecting storms to arrive on the summit at 2pm, this had given us a certain impetus to arrive and get off the summit in good time, but during the ascent we’d heard that the storm was coming in a bit faster than that! Thankfully the storm didn’t actually hit until 4pm and by that time we had descended into the valley, but my goodness the thunder was loud and the rain heavy!

After 4 hours of hard walking we reached the summit building and of course the car park, for those who preferred an easier route of getting up. After a chilli dog, slice of pizza, a doughnut, a coffee and a coke in the summit cafe I was ready to start the activation (and due a bout of diabetes). The wind was really blowing at the summit marker, so I decided to set-up the other side of the summit building, where we were completely sheltered from the wind. 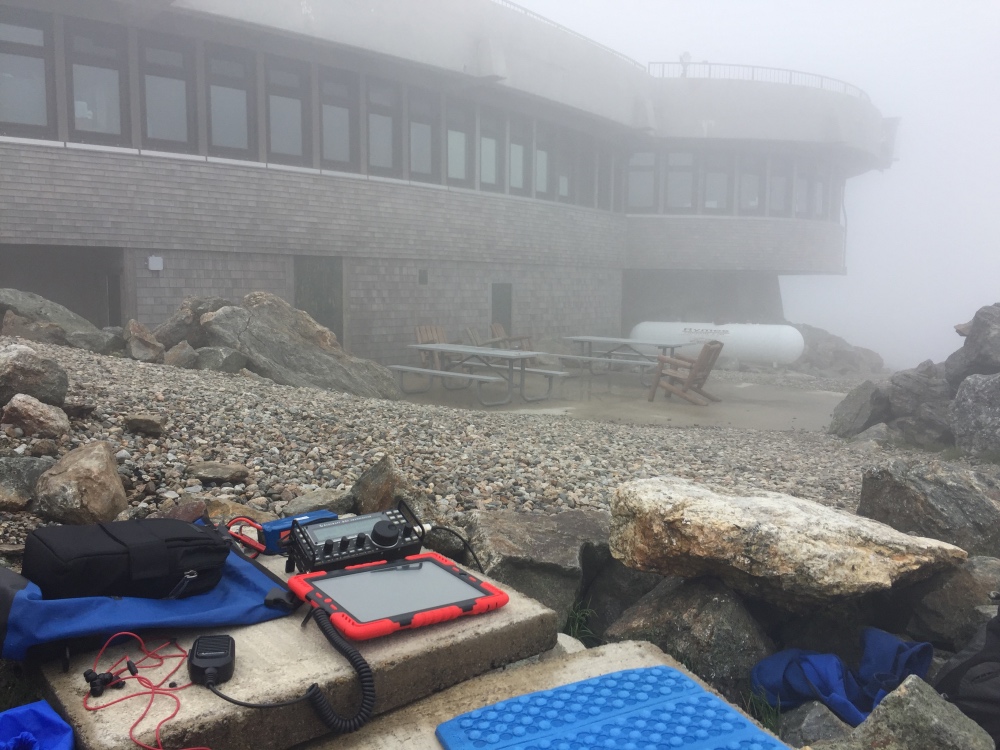 The Elecraft KX3 setup just outside the visitor centre 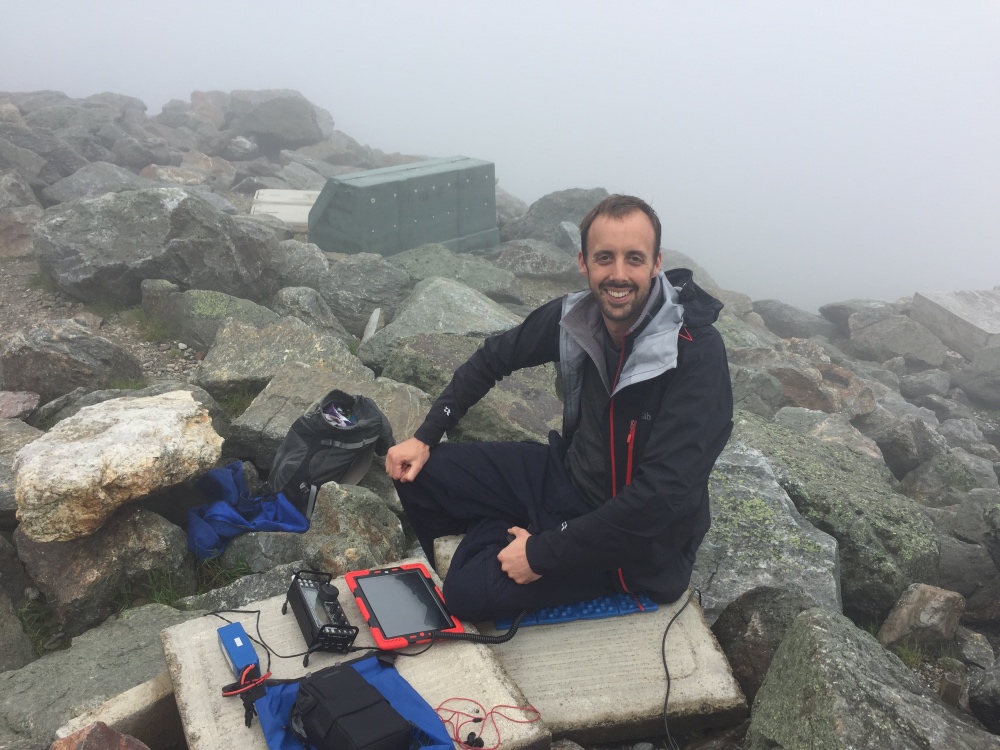 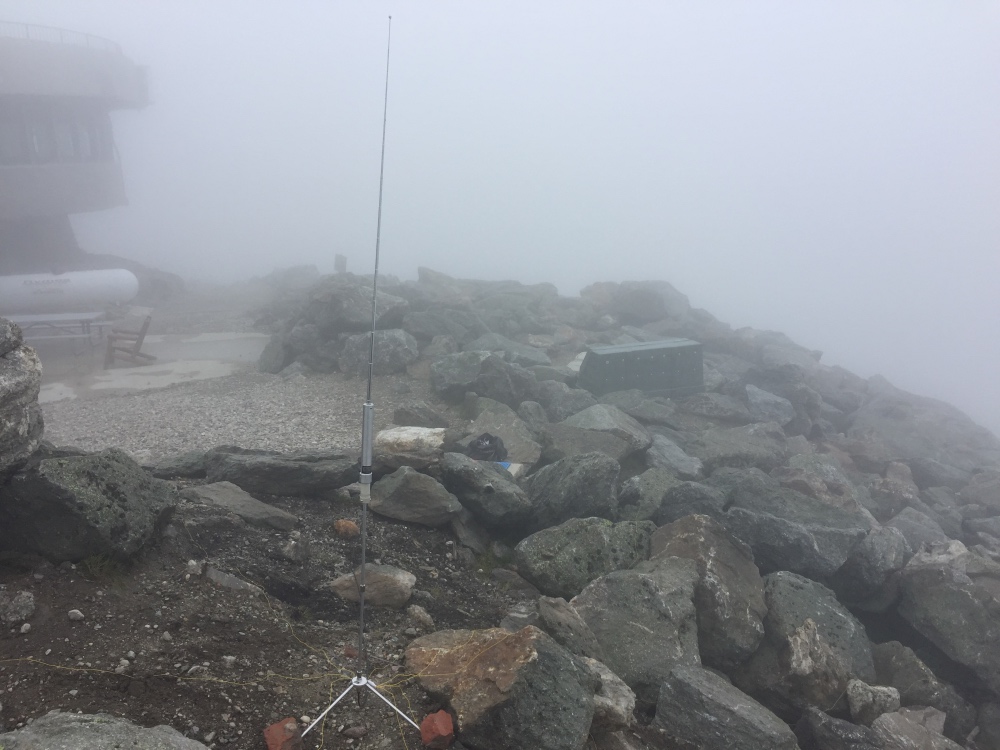 The MPS Superstick antenna… in the mist

After setting up the Elecraft KX3 on 20m I was actually relieved to find a contest in full swing. A SOTA activator doesn’t often say this, but given I had no mobile signal to get a spot out it meant I’d be able to work a few to activate the summit. I’d actually been looking forward to working across the states on 20m but this plan wasn’t to be due to the contest.

Working stations was a struggle due to my low power, QRM and tricky callsign W1/M0JCQ/P which confused a few ops! Eventually I managed to scratch together the 4 contacts needed, with two DX contacts back to European Russia and Germany! With my two companions patiently waiting I decided to pull the plug at this point.

It wasn’t quite the activation I’d imagined but I was very pleased to bag my first summit in North America and the largest one in the North East of the United States! I’d originally planned to activate this summit on 2m FM, but that plan had been scuppered when I realised my European HT’s wouldn’t TX on the U.S calling frequency!

Here are some photos of the 3.5 hour descent… it’s safe to say we all slept well after this walk and a few beers! 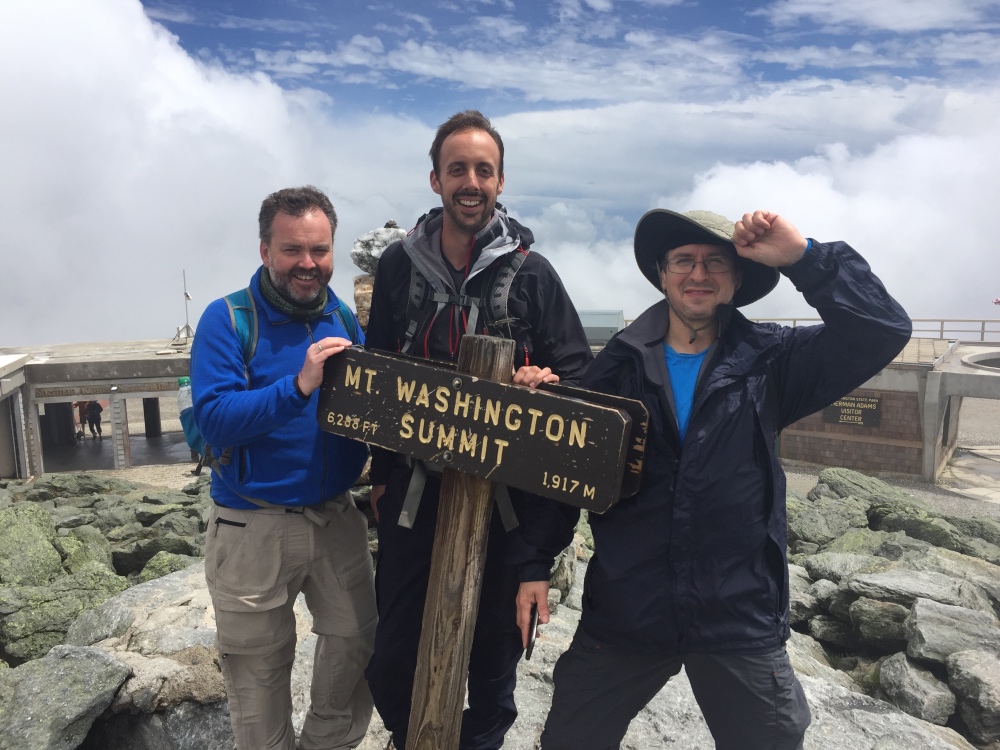 Me and my companions at the summit during a rare clearing 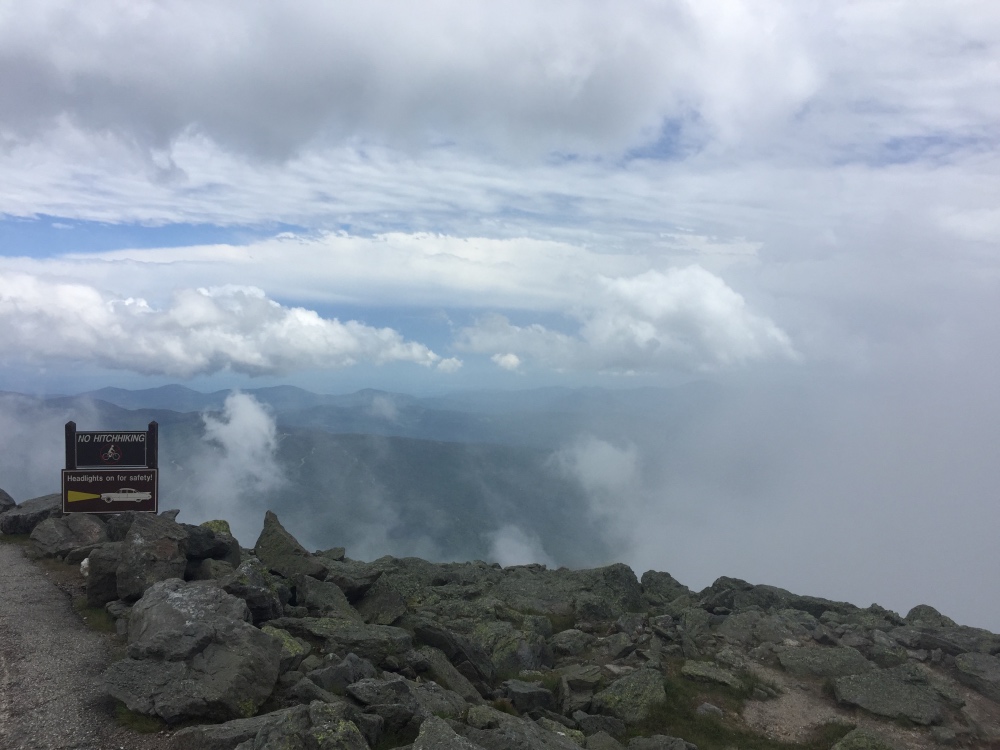 Spoilt with some views during a clearing 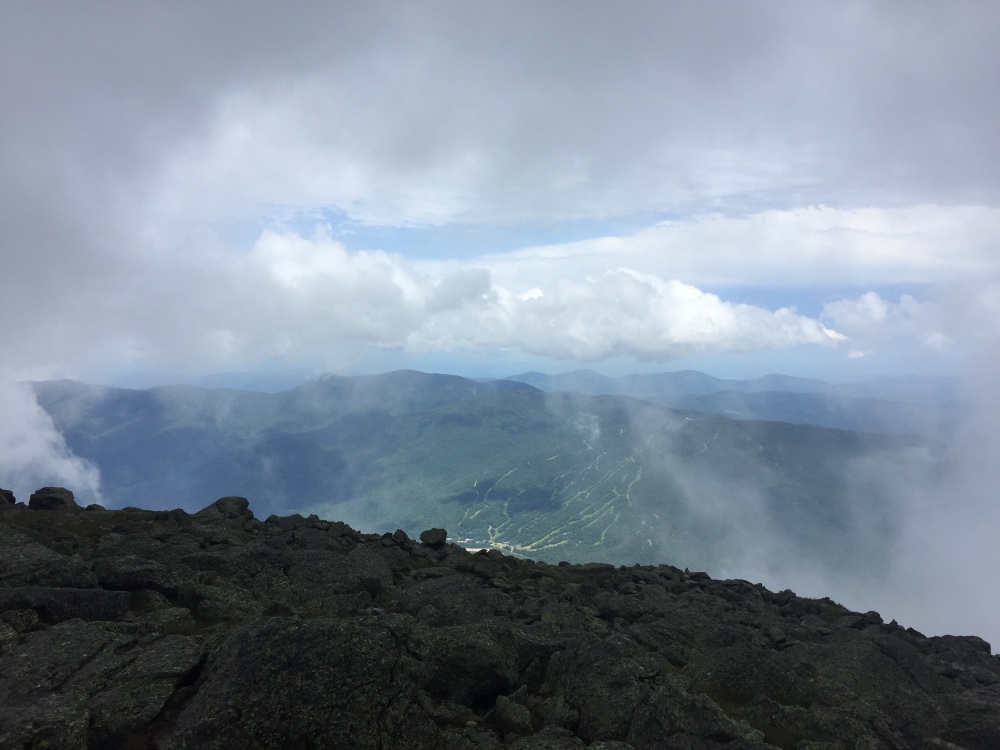 Admiring the view over onto Wildcat Mountain (W1/HA-060) 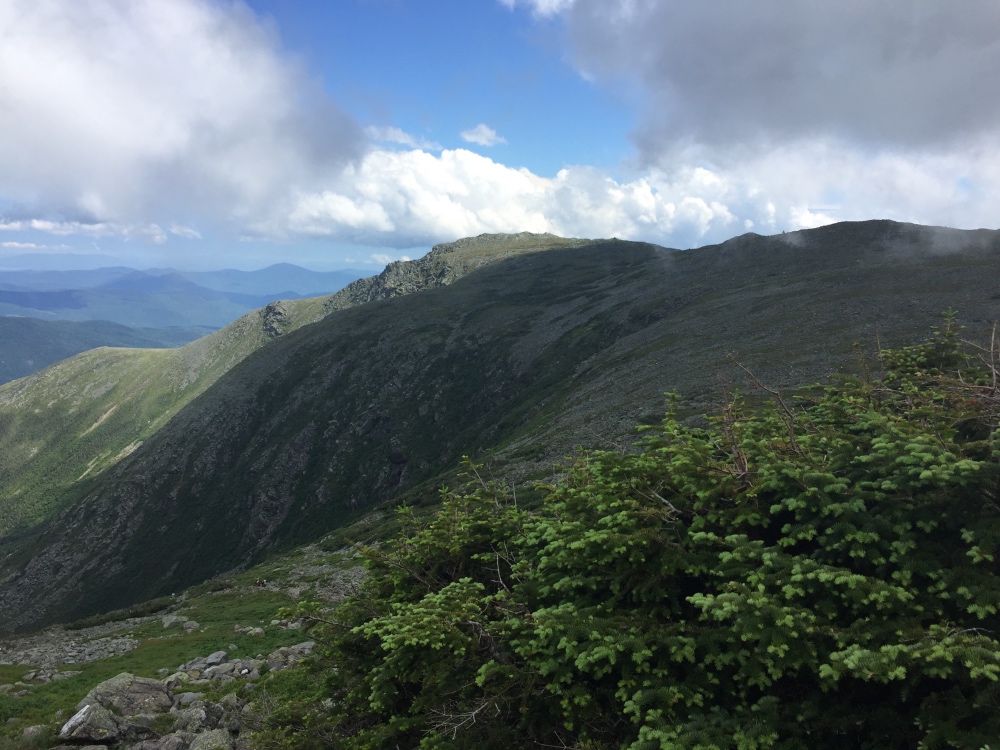 Lovely view along to next summit 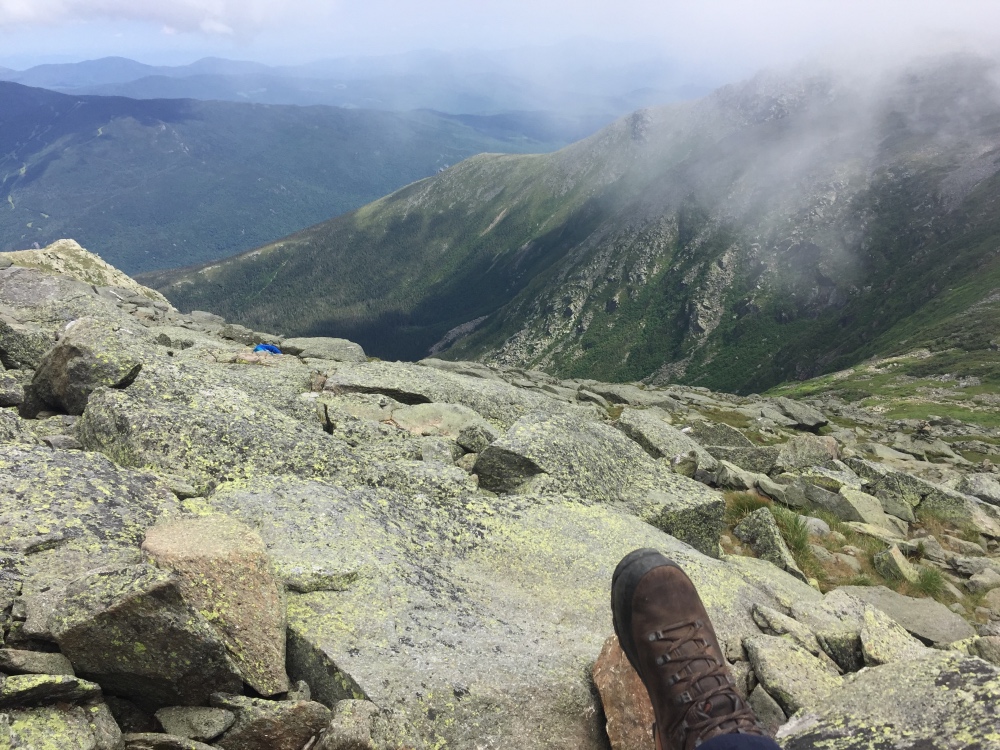 Rest stop on the way down 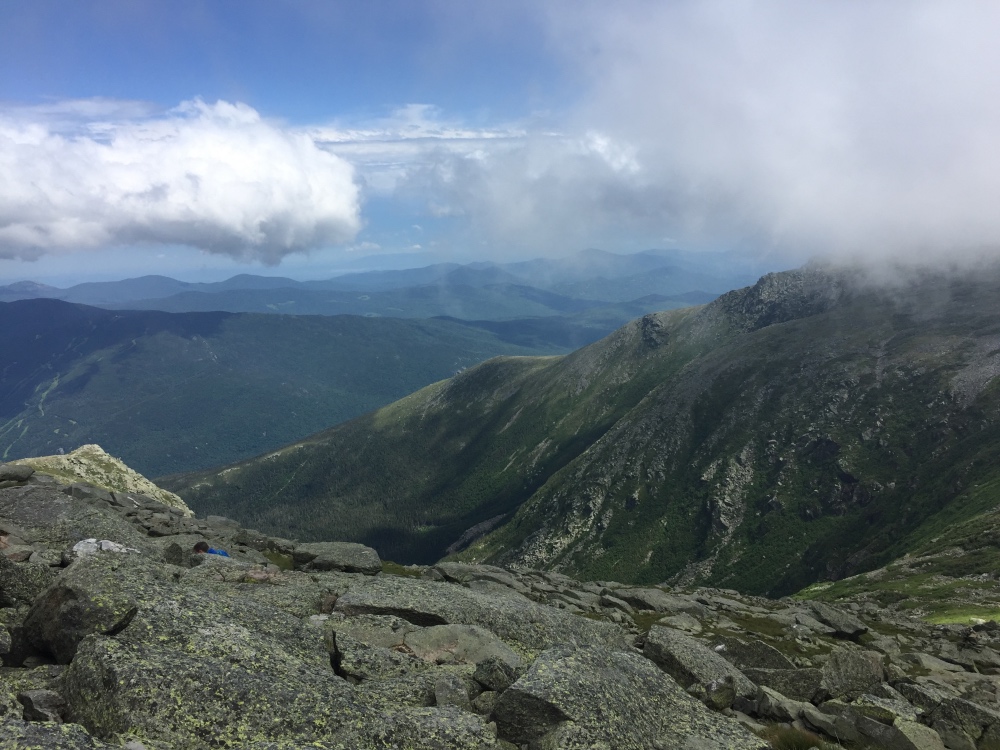 The mountains just go on and on 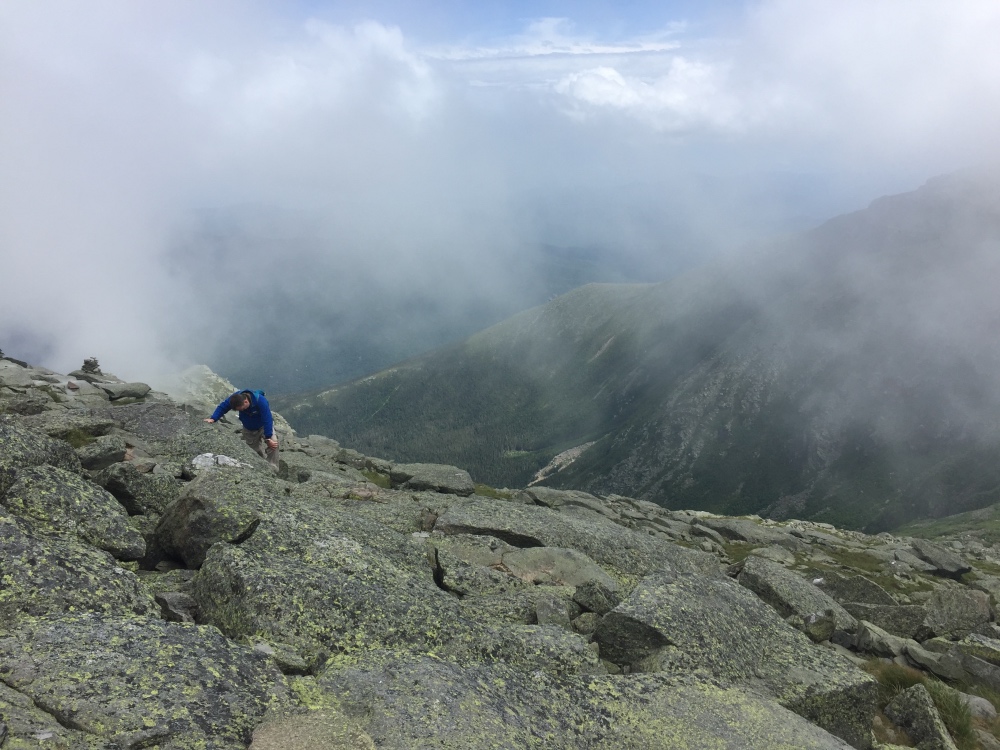 Steve getting to work on the descent 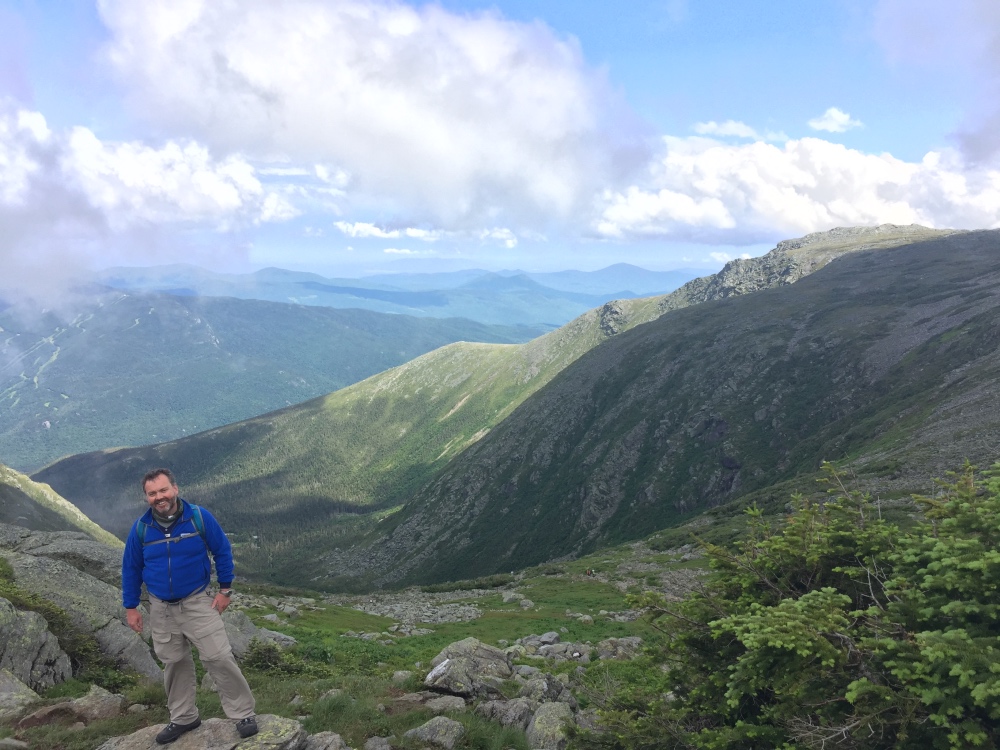 Steve posing on the descent 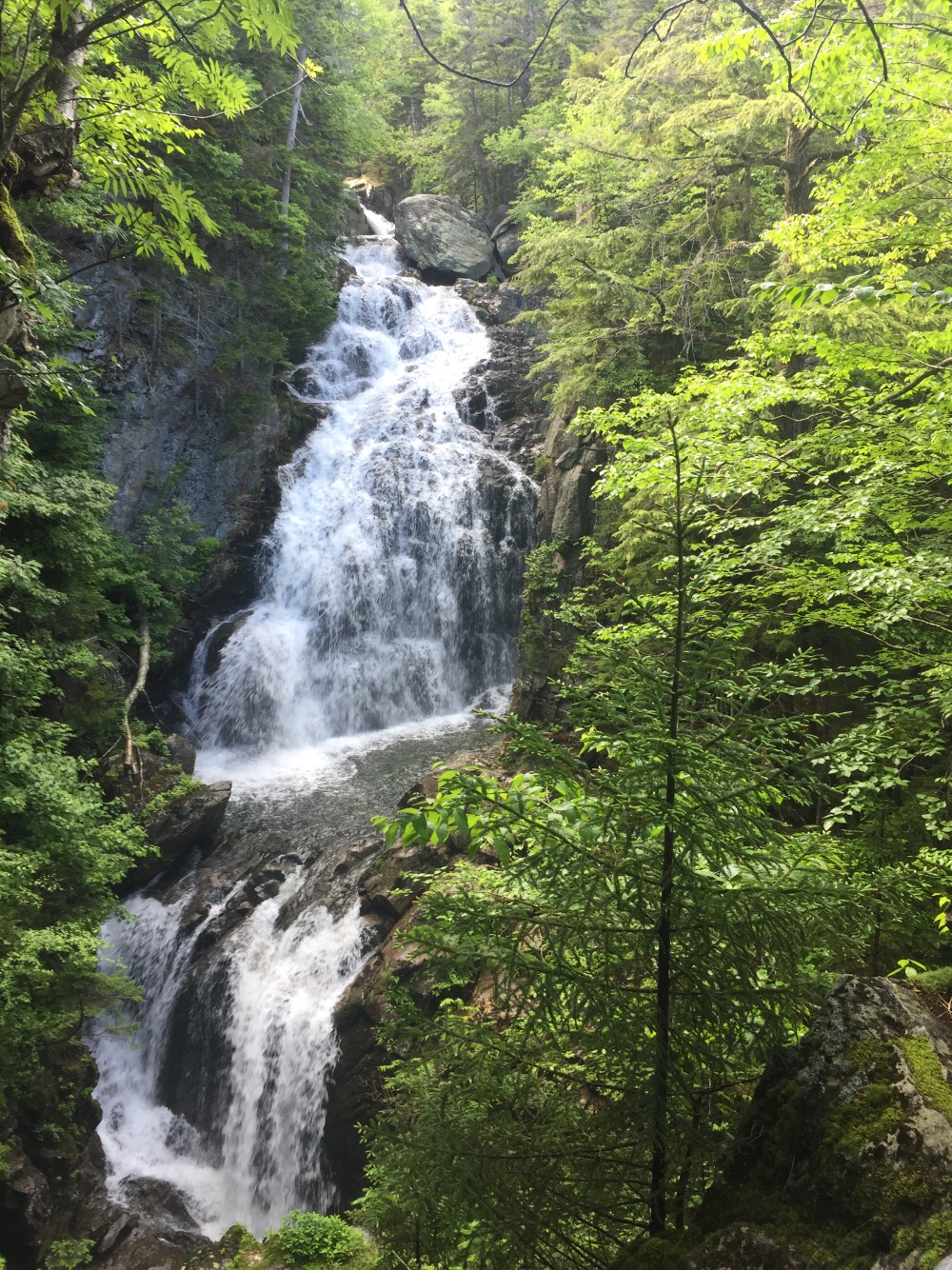 Waterfall at start of trail 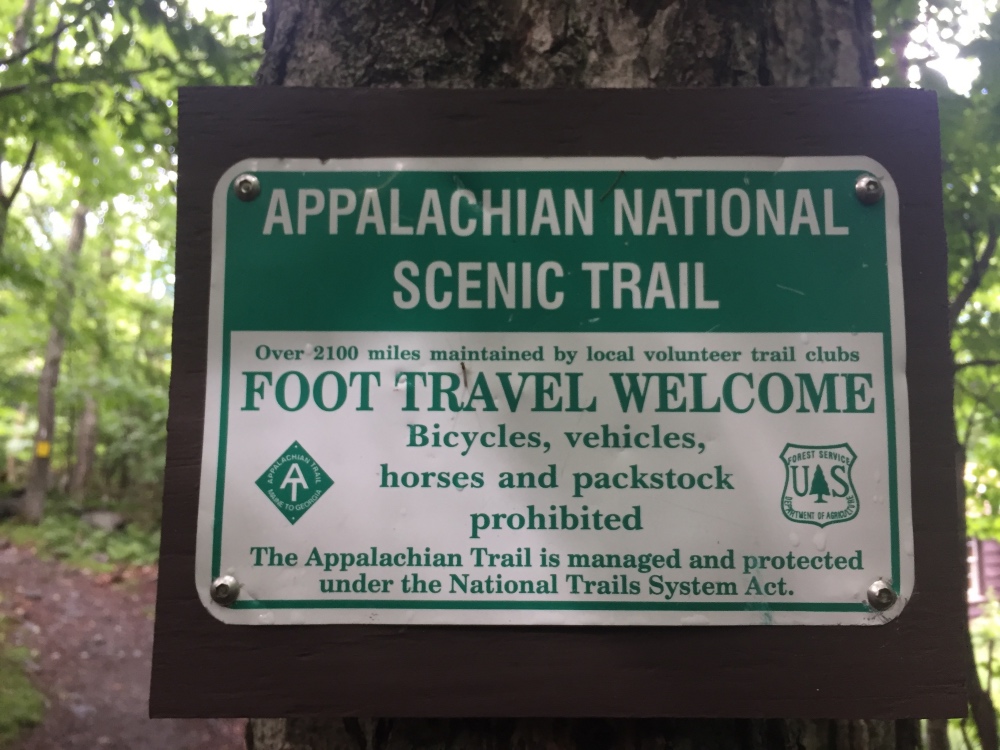 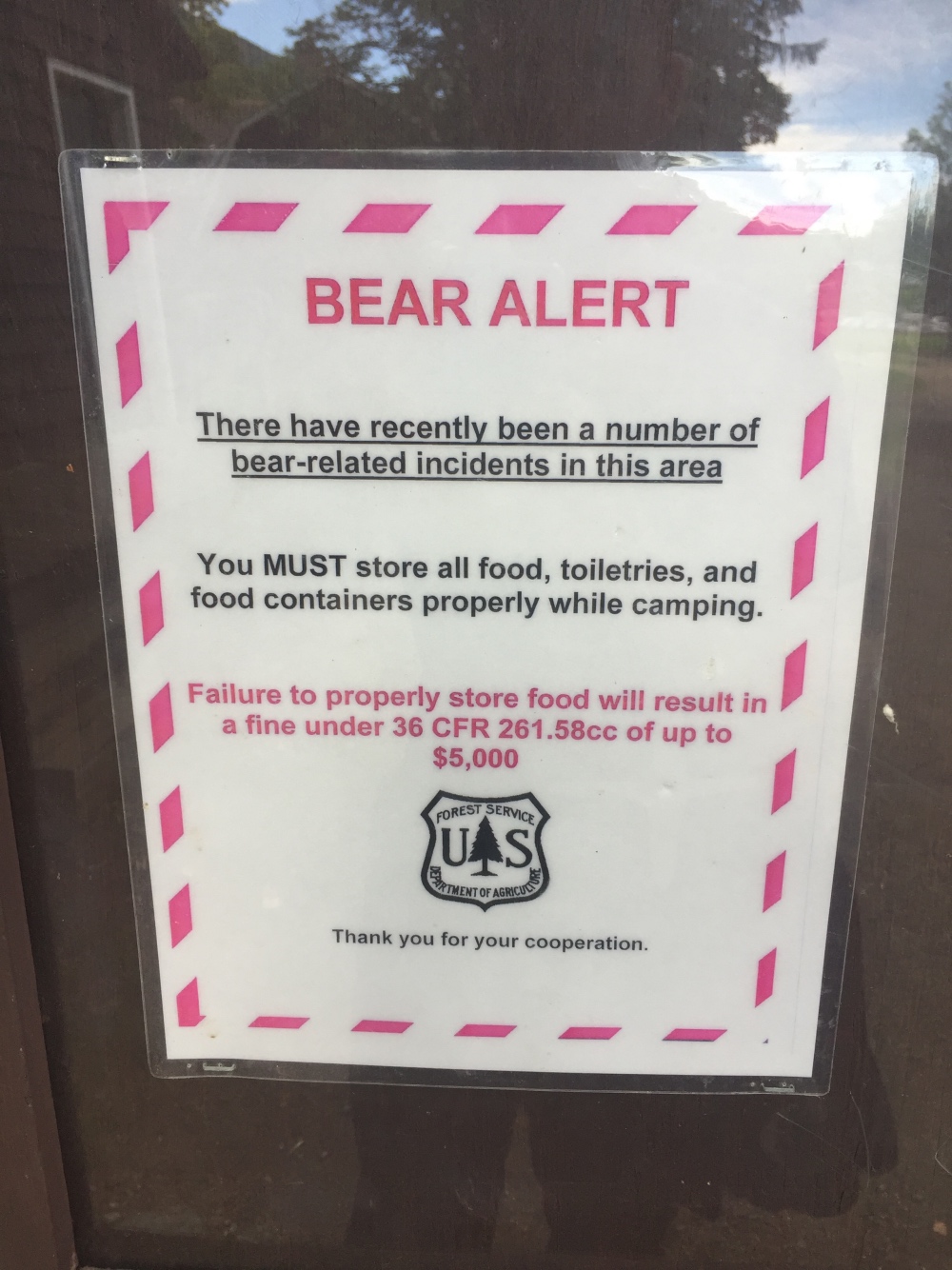 Bears! We didn’t see any