Travel onwards to Cambodia from Laos

We’ve been and left Si Phan Don (“Four Thousand Islands”) in southern Laos, and are now in Phnom Penh, in Cambodia, our sixth country on the trip.

The four thousand islands is located at the very south of Laos where the Mekong becomes wider and shallower and where literally thousands of islands and islets exist in the middle of the river. We stayed on one of the three inhabited islands called Don Det, which showed Laos at it’s most relaxed (imagine everyone on sedatives)! The island is the cheapest place we stayed in Laos, with accommodation costing about 80 pence per night, and our daily spending was around four pounds including all food. The type of place you could stay for weeks, providing you had no inclination to continue into Cambodia and little motivation. In fact a lot of travellers seemed content lazing around in hammocks, after consuming Happy Shakes/Pizzas/Cakes. Anything prefixed with “Happy” in these countries means basically it’s laced with Cannabis, there’s also similar phrases for magic mushrooms as well. One traveller told us he was really touched that one restaurant was offering “Happy Birthday Cake”, thinking Laos people were baking cakes for peoples birthdays, only for me to shatter the illusion and inform him he was slightly incorrect! In Vang Vieng we were offered a glimpse of the “special menu” after ordering our evening meal, only to see such healthy things as “Bags of Happiness” (weed), Speed, and Opium! This was around the time we looked around and noticed most of the travellers around us had passed out!

The islands were beautiful and almost unspoilt, where you can witness traditional village life, and of course hordes of fisherman casting their nets into the mighty Mekong river at sunset (and maybe sunrise – if only i could get up at that time!).

Here’s some photos of the area:- 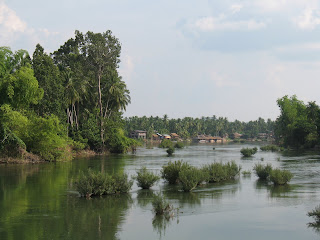 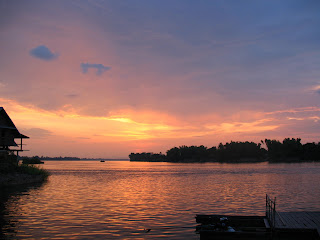 Yesterday we undertook a 13 hour bus journey from Si Phan Don in Laos to the capital of Cambodia – Phno Penh. We crossed at the Nong Nuk Khiene border crossing at the very south of Laos, we’re still not sure if this is an official border crossing!

On the Laos side we were required to supply a $2 “processing fee” to get an exit stamp out of the country, Chrissy tried to negotiate this to $1 but they held on to her passport and demanded $2, worth trying! We then coughed up and paid, looking at them with as much disgust as we imagined we could get away with. We then proceeded to walk across the “no mans land” road separating Laos from Cambodia, we presented the three Cambodian border officials with our passport complete with Cambodia Visa (pre-applied for in Bangkok, much bribes required on the border i believe!), where they also demanded a $2 “processing fee”. While filling in our arrival details we witnessed an Israeli guy refusing to pay, to which the officials kept his passport and told him to wait one hour, as he was in “their country now”. Based on this we decided to just pay the $2 and smile at them to just get through the border. Of course bribing is never good, and you dislike it, but these are two of the worlds poorest countries, so you expect a certain level of corruption among officials. The final thing that made us laugh was that all the dollars collected from us, were put in a briefcase, which they probably take home at the end of the day.

End result however is that we’re in Cambodia (legally – i think!), and $4 each poorer, but a funny experience none the less!

Yesterday we rocked up at Phnom Penh at around 9pm in the backpacker ghetto known as “Lakeside” and were glad to get some beds with minimal hastle.

Today we walked around Phnom Penh and were glad of the hustle and bustle of the place, something that was missing in Laos, even in the capital! We visited the S21 Genocide museum where thousands of Cambodians were detained and tortured before being murdered by Pol Pots brutal regime. The place is obviously a sad and extremely moving place, and a gruesome reminder of how cruel and deluded humanity can become in pursuit of “ideals”.

A moving picture from S21:- 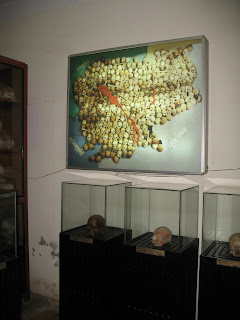 Tomorrow we visit the killing fields where more atrocities took place, depressing, but a vital part of any trip to Cambodia.