Firstly just to let everyone know, we’re ok and safe. The protests and the newly announced national state of emergency sounds a lot worse than it is here in Thailand. We just caught some protests in Bangkok, but here where we are there’s nothing to tell that there’s anything wrong. Thailand gets a new government every couple of years, by protest, so this is nothing new!

Well it’s been a crazy couple of weeks since we last had a chance to use the Internet properly. Much of the time has been spent on the southern Thai islands such as Koh Phi Phi, Koh Tao, and Koh Payam (an undiscovered gem near the Myanmar border). It’s suffice to say that me and Christina are as tanned as we have ever been. 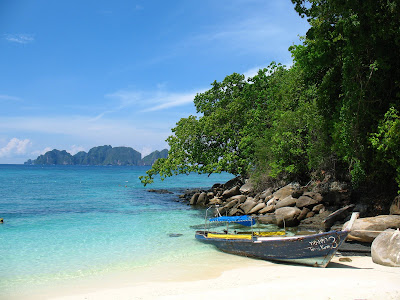 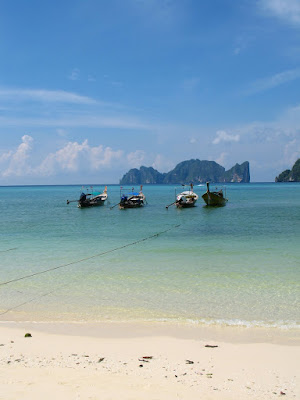 Koh Phi Phi is an amazingly beautiful island, with surrounding limestone islets included Phi Phi Leh, which is were they filmed one of my favourite films “The Beach”. The lagoon here is amazing. The only problem with Koh Phi Phi is that post-tsunami it’s gone upmarket, so it’s quite expensive and there are a lot of tourists.

Koh Tao was less developed than Phi Phi, especially as always we headed to a quiet bay that other people don’t seem to bother with. Koh Tao is where i gained my PADI Open Water diver certification. This is done over four days, which includes reading a 300 page book, answering several exams, and completing 2 closed water dives (in a swimming pool) and 4 open water (the sea) dives, and demonstrating you can carry out several practical tasks underwater. The course was harder than i imagined and was quite full on, i passed in the end though and saw a lot of amazing coral reefs and a lot of sea life which was mostly amazingly beautiful or amazingly ugly, and to be honest a lot of the time deadly (Lionfish, Scorpionfish, Stingrays etc…).

Here’s an action shot Chrissy took, just as i rolled off the back of a long tail boat… 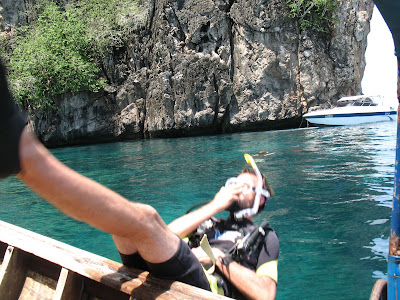 After completing the Open Water course i was certified to dive to 18m, where there’s a lot of interesting stuff in these countries, however if i want to dive in England i’ll want to go to a ship wreck as some point, and these are between 18m-30m.

I resolved this situation in Koh Phi Phi where i enrolled to do the PADI (Advanced Open Water) certification course. This course consists of five adventure dives (two compulsory: Deep Dive (down to 30m) and an underwater navigation dive), the other three dives are optional and i selected to do the Underwater Photography, Peak Performance Buoyancy (controlling buoyancy and your water level based on your breathing, very useful!), and my favourite the Night dive. The course also involves reading another 400 page book and completing a number of knowledge reviews.

The night dive was especially special, we dived in a group of five, with one instructor and one dive master to ensure no one got lost and took underwater torches. The sensation at 18m underwater at night is scary and amazing (which is why i liked it so much), when you turn your torch off and move around in the water loads of bio-luminescent creatures light up, and you can see small jellyfish which are clear but have many small different coloured lights tracing up their bodies. It’s the most amazing thing to wave your hand in the water and see all these organisms light up around it.

The deep dive went down to the desolate abyss at 30m, where there was little life (we only saw one stingray), and where the current was crazy. We stayed at this depth long enough just to feel and test the effects of nitrogen narcosis. Nitrogen narcosis effects people in different ways, where some people just can’t handle it, and either flip from euphoria to complete irrational behaviour (forgetting all their training and do stupid things). We tested for it by timing how long it took to write our names down backwards at 30m and then again on dry land after wards. The time difference for me was only 4 seconds, which seems to be good.

After completing this course I’m now a certified Advanced Open Water PADI diver, certified and trained to depths of 30m. To go deeper will require technical dive training and nitrox training (special tanks containing a higher percentage of pure oxygen). This would allow me to go to 45m, but there’s poor visibility and little to see at these depths, and already i feel a little bit too much like Jacques Cousteau !

After the islands we passed through Ranong and Koh Payam, both on the Myanmar border. These places have interesting people, with a 50% Thai, 50% Burmese population.

Koh Payam was lovely and undiscovered, where we relaxed for two days before heading north. It was also where i was hit by a motorbike. This is pure irony, because this was the quietest place we’ve been to on the whole trip, and survived unscathed against the ferocity of the Indian city traffic! So me and Chrissy are walking along keeping in to the side to allow room for motorbikes to pass (this island doesn’t have cars, only motorbikes and tractors!), when i’m suddenly flying through the air, with a million thoughts going through my head (like oh no this is where my trip finishes!), and then worrying because i’m heading straight for Chrissy who is in front of me, i hit her and we both fall to the ground. Kind of luckily she broke my fall (thanks!), and we both only had shock and some minor cuts and bruises. What made matters worse was when i get up to give the driver a piece of my mind i see a young boy looking very scared and apologetic, this was the driver of the motorbike! The irony is unbelievable, and we can only laugh in hindsight!

We then passed through Kanchenaburi, Bangkok, Sukothai and we’re now in Mae Sot. Mae Sot is another border town, with only a river dividing Thailand and Myanmar. Today we took the plunge and visited Myanmar (Burma) for the day, this involved a mostly moral dilemma, which is if we go we have to pay a 10 pound visa fee which goes straight to the Myanmar dictatorship, which we don’t support in any way. However we also really wanted to see it for ourselves. So today we did.

Instantly life the Myanmar side of the river seems harder, it’s noticeably less affluent than Thailand, cyclo-rickshaw and self proclaimed guides gather around you (which is where we remembered our training in India!) trying to earn some money. The people are also so, so not used to seeing foreigners, we received constant bemused/inquisitive stares from people, which we returned with beaming smiles, which they then reciprocated. We visited a number of stunning Buddhist temples, and happened to experience some kind of celebration, where we quickly became the biggest attraction, scores of Burmese people now have mine and Chrissies faces on their cameras! 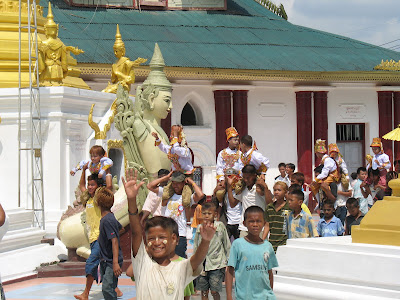 The town called Myawadi, is a kind of edgy border town where there’s quite a dark undercurrent of illegal activity. The main economy here is of the smuggling nature (teak wood, gemstones, and copious amounts of Meth-amphetamines (known locally as Yabba, ominously also the Hindu goddess of death, but also similar to Crystal Meth obtainable back home). So it was with a little relief we reclaimed our passports (held by Myanmar officials as insurance so we come back) and crossed the bridge back into Thailand (where we got a new 15 day visa for free)!

In a few days the Thai new year festival celebrations begin called Songkran, this is based on the lunar new year, and coincides with the hottest time of year, so the Thai have combined the two which involves people throwing loads of water over each other for several days. It seems to have already started as we’ve had several bucket loads of water chucked at us today (foreigners are a big target!), it’s very refreshing in the heat of the day and it’s all done with good humor.

We head to Chiang Mai tomorrow where we will be for most of the festival, which is supposed to be “the” place to be for it.

Laos is now on our radars, and we’ll be crossing over in between one to two weeks.