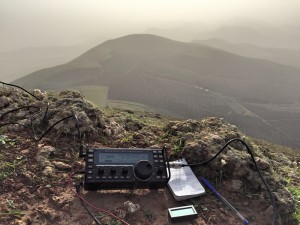 Elecraft KX3 looking out from Guardilama

One fateful day on the 10th of January 2015 I activated two SOTA summits on the island of Lanzarote (just off the north coast of Africa). The summits themselves weren’t overly special, being only worth 1 and 2 points… but band conditions that day were.

Since I arrived on the island conditions had been pretty decent, except on one afternoon when a solar storm had affected the bands. Based on this I decided I would see just how low I could go on the 10m band using SSB. 10m was consistently open during my couple of weeks on the Canaries and I was keen to make as much use of this band as possible. As we’re on the solar decline now I’m glad I did as over the last few months it’s been rarely open.

I used a Elecraft KX3 transceiver which I use for the majority of my portable work. The antenna was a SuperStick Vertical with a homemade radial system (8 wires cut for a quarter wave on 20m – the lowest band I use with this antenna).The Elecraft KX3 has very fine power output controls compared to most rigs, you can step down from 10w to 3w in 1w steps, after this you can reduce in 0.5w steps until you reach 1w and then you can get really serious and reduce power my 100mW. 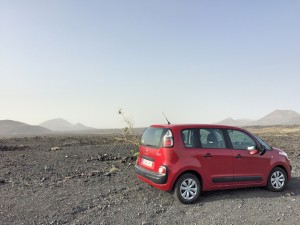 Car park: Middle of a lavafield!

Montaña Negra was my first summit of the day. It’s a black, volcanic and exposed summit surrounded by lava fields and you can probably imagine it has quite an other worldly feel to it.

While climbing the summit I decided to try QRPp on 10m (this band had never been used from this summit previously), to see if I could make any contacts. This brainwave came while trying to keep the volcanic dust out of my eyes that plagues summits on this windy island. 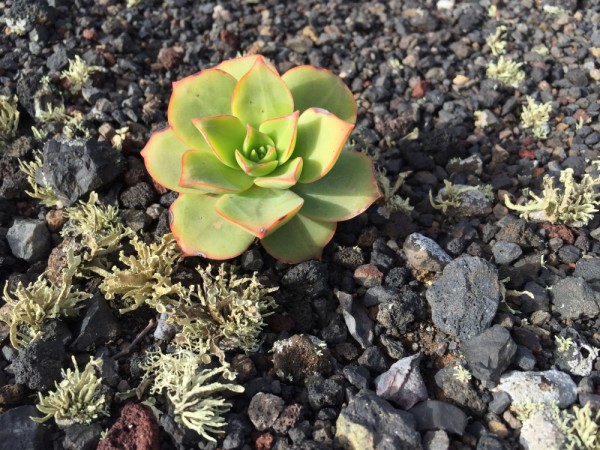 Not much grows up here, except litchin and these succulents 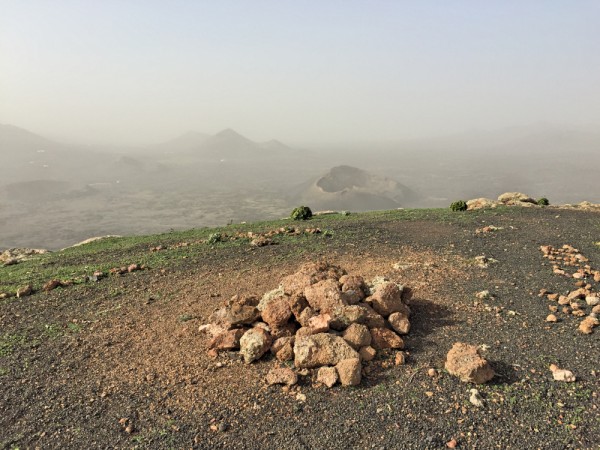 I started my SOTA activation using the full 10-12w to gauge conditions, I was easily reaching around Europe and made several easy ragchew contacts back to G. During one of these with G4OBK (Phil) I asked if he would be happy to help me test just how low I could go. He responded positively and before long I was winding down the power in increments. Signal reports were still really good as low as 1w SSB which was quite surprising. 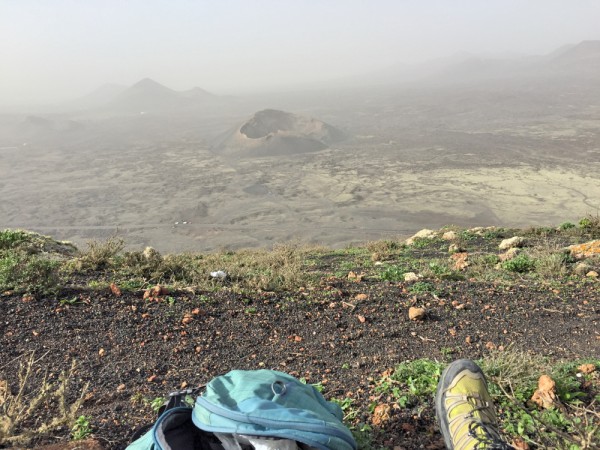 My operating spot looking onto a cinder cone

Dare I go sub-1w? Yes! I wound down in 100mW increments and maintained good signal reports. I finally took the plunge and went as low as I could… 100mW. I really didn’t expect this to work but G4OBK gave me a 51 report.

After finishing my QSO with Phil I decided to keep the power at 100mW and see if I could make any further contacts. G0UIH (Steve) came straight back to me after calling CQ. We had a nice long ragchew not truly being able to believe this was working so well. At this point I decided I needed video evidence to prove to myself that this was really happening:

I finished this activation with 34 QSOs while staring at my antenna in disbelief that such miniscule amounts of power could go so far. 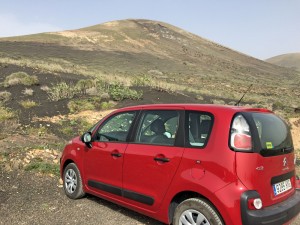 My parking spot looking onto Guardilama

Guardilama was my second SOTA activation of the day and this summit was a little bit greener and more like earth(!) than Montaña Negra.

I was keen to continue my 10m QRPp experiments, especially as it was just after midday and 10m would be at full strength. More crucially the US hams would have woken up as well and I wanted to see if I could make the trip across the pond using QRPp, I was feeling ambitious at this point!

The wind was quite a bit stronger on this summit and I had to anchor the vertical with several rocks at the base. My operating position was inside an overhang of the summit itself, kind of like a sheltered cave.

After spotting myself a pretty intense pileup arrived (rarely activated summit, weekend and good conditions!), so I waited until I ran this down a bit before trying any QRPp fun.

Stateside seemed to have woken up so I snagged WD9Q (Matt, Illinois) to see how low I could go. The distances are significantly further to the states so I wasn’t confident in going sub 1w. Dropping down from 10w to 5w was still an easy copy for Matt, dropping down to 2.5w was the same, next we tried 1w. This also worked, so time to try sub-1w. In the end we established 400mW was the minimum power I could use to maintain the contact at 41 to 51. 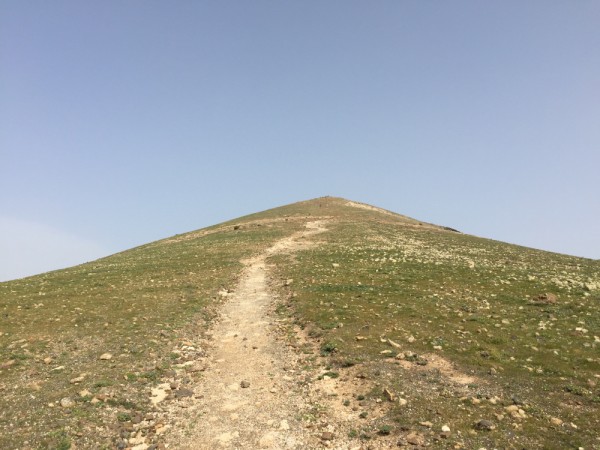 The well defined path up to Guardilama 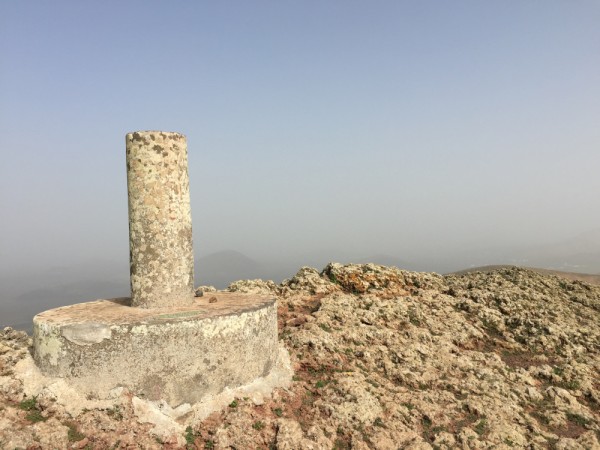 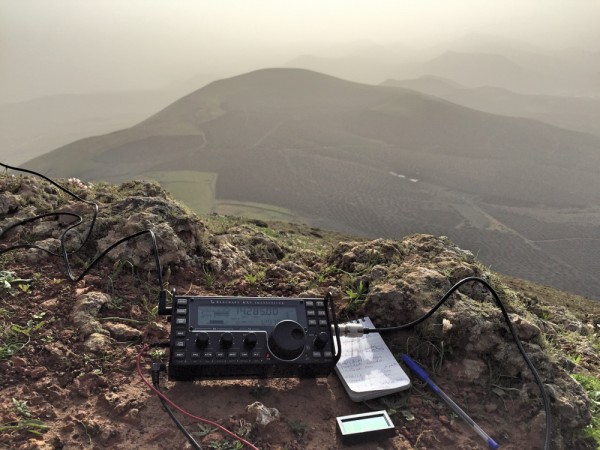 Elecraft KX3 looking out from Guardilama

I was truly impressed by this and later worked out that this qualifies for the QRP-ARCI 1000 Miles per Watt award. In fact it easily achieves this as the distance was 4,117 miles using only 400mW, so this works out as 10,294 miles per Watt. I love QRP!

After this contact I wound the KX3 back up to 10w QRO and finished up with 70 QSO’s including 11 contacts into North America (logs below if you’re interested). 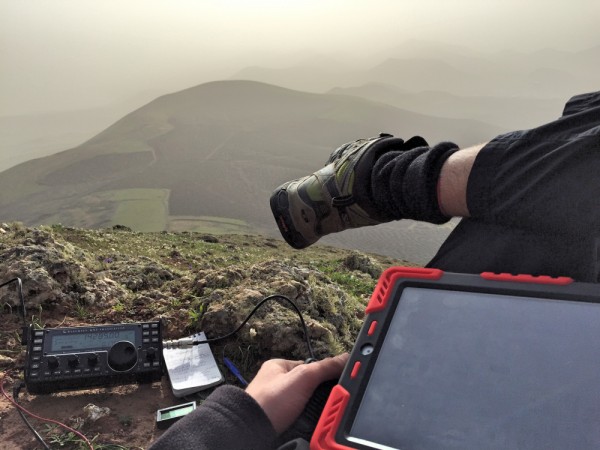 I finished this day a very happy man. Not only had I activated two rare SOTA summits but I’d also achieved the QRP-ARCI 1000 Miles per Watt award. In fact it easily achieves this as the distance was 4,117 miles using 400mW, so this works out as 10,294 miles per Watt… and using SSB. The mind boggles to think what CW could have achieved on this day. I love QRP!

In case you’re interested here are the logs from the days activations.

34 QSOs in 56 minutes (quite a few ragchews with the G chasers!)