On Tuesday night I took part in another RSGB 6m UKAC contest, this being my 3rd 6m contest and is part of my 2015 amateur radio target of using VHF more. Having just started a new job I didn’t have any time to prepare myself for the contest and as has become the custom in these UKAC’s I was late getting on the air again! Despite this I knew my fellow 6m rival for this year, Michael G0POT, was not able to take part in the contest due to work commitments, although unfortunate, it gave me an opportunity to get ahead after he thrashed me in the last 6m UKAC!

I went portable (IO91rr) again for this and it seemed like the coldest one so far with the temperature hovering around 3 degrees, with strong wind and even some rain. I entered into the AL (low power – 10w) section as usual using the SOTABeams SB6 Moxon albeit at a compromised height of 4m above the ground due to strong wind… not ideal!

Conditions seemed pretty flat and the first part of the contest saw me scratching my head as I could only hear strong local stations and nothing else. After some time I noticed that the Preamp on the Elecraft KX3 was turned off, as I’d been activating SOTA summits the previous weekend, where the preamp certainly wasn’t needed on the HF bands, however it certainly was needed for 6m. With this doh! moment realised and rectified 6m was a bit more lively.

Conditions seemed worse than my previous two 6m UKAC’s and certainly the longest DX was not far with G4RUL/P at 126km. Quite a few stations were hard work to exchange details with due to these conditions, but despite this I managed six multiplier squares and 12 mults in total. This combined with my mix of search & pounce alongside running I put a half respectable score together. My last UKAC saw me mostly search & pouncing but not calling CQ, so this time I tried to mix it up and my score improved as a result. Running only really brought in local stations but with the multipliers as well as a good run the score increases quite rapidly… I’m getting better but still learning each time!

Here’s the map of the QSO’s I had: 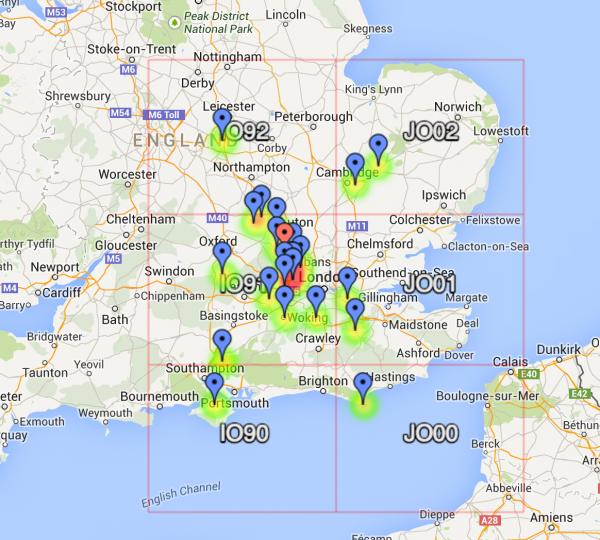 I’m not sure my current portable spot has the best takeoff, the QSO map seems to indicate it’s mostly to the North and South with not much East and West, despite beaming that way at times. I have a few other candidate hills to go to so will try and check these out next time, but these are further away from my QTH and my track record of being setup before the contest starts is not good!

Here’s the list of QSO’s that I ended up with:

One of the unexpected results of contesting is that I’m more focused on improving my station and antenna to make the most of the QRP power I use, especially after a contest where conditions are poor!

A number of lessons were learnt for next time:

Another fun session with lots of learning despite the quite nasty conditions out, by the time pleasent weather arrives and Sporadic E season kicks in I should be good to go with all these lessons under my belt 🙂