The following is a list of the observations i’ve made while visiting Munich at Christmas over the years. This list is not conclusive and may vary between the different areas in Germany, but it represents my experiences to date. Frohe Weihnachten!

The biggest shock i encountered on my first Christmas in Germany was that Christmas day is on the 24th of December and not on the 25th like it is here in the UK. This is always magnified by the fact we arrive at the last minute from work, so i never have time to get into the Christmas spirit, which i normally do on Christmas Eve… which is in fact Christmas day in Germany!

Confusing and unnerving, especially as the 25th isn’t a special day in Germany at all, it’s just a regular bank holiday!

Christmas seems to have retained a feeling of authenticity compared to the UK. It is more about the birth of Christ and less about the mass consumer frenzy us Brits whip ourselves into. I would argue this is better and more healthy, as people are less stressed and don’t get themselves into debt over Christmas, which is about as far removed from the reason for Christmas as one can imagine.

Spending time with family and loved ones is the order of the day.

3. Christmas Morning is a Working Day

Yes, Mum’s not in the kitchen cooking a Turkey, she’s gone to work!

Some shops and Christmas markets are still open on Christmas morning so you can stock up on last minute (more like last second) Christmas shopping. Christmas day only really begins in the evening of the 24th.

In England we spend weeks gearing up for the big day and all the decorations will have already started gathering a fine layer of dust as they’ve been up for weeks. Not so in Germany. The Christmas Tree goes up on Christmas Day, once again with ruthless German efficiency. 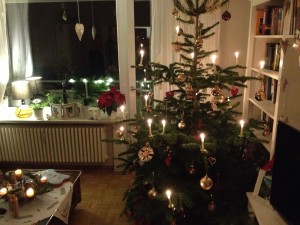 5. Presents Opened in the Evening

To add to the torture the kids then only have  a couple of hours to play with their new toys until they have to go to bed… now that’s mean!

Yep, no turkey in sight, not even a mythical sighting of a roast potato! Raclette was the order of the day although i’m led to believe that Goose is also popular.

7. Real Candles on the Tree

This took me by surprise and is sure to put an Englishman on edge and ready with the bucket of water.

Where has the tinsel and flashing fairy lights gone? Germans shun this in favour of tasteful and understated decorations. Think straw stars and red candles on the tree.

9. No one passes out in front of the TV!

Whether it’s the lack of a colossal turkey meal or the lack of alcohol, the Germans refuse to go into a food coma!

The carol Silent Night is indeed not called Silent Night in Germany, it’s “Stille Nacht, heilige Nacht”. When you find out the original was composed in Austria this makes sense, and it’s actually the English which decided to translate the whole thing!

What about New Years Eve?

Firstly New Years Eve doesn’t happen in Germany, it’s all about Silvester. Same thing re-branded, just add more fireworks into the mix (with the same alcohol intake) and you have a good idea of what it’s all about.

Germans know when it’s Silvester because “Dinner for One” comes on the TV. This is a British comedy cabaret sketch from the 1920’s which is shown across multiple channels every Silvester. I’ve truly never heard or seen this in the UK, so i’m curious as to why it’s become such a German institution!

Update: My Norwegian friend Ole Halvorsen has informed me that they also watch Dinner for One in Norway, but on the 23rd December (which is known as Little Christmas Eve!). The question still remains how this show is so well known in the rest of Europe, but unheard of in England where it was made!