Going for Gold with the WAB Award Scheme 9 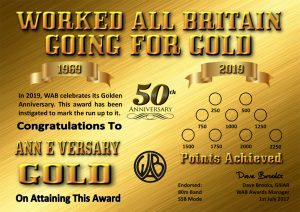 I’ve been a member of Worked All Britain (WAB) for a number of years, and have been actively collecting “squares” since 2014. For those unaware Worked All Britain is an awards scheme based around working amateurs within the United Kingdom, while collecting squares, which are simply the UK divided up into 10x10km squares. My operating mostly involves working around the UK, this is what I seem to enjoy more than the DXing and I’m fascinated by NVIS propagation to boot.

The Going for Gold award was introduced for two reasons, the first is to mark WAB’s 50th Anniversary year in 2019 and to also increase activity despite bad conditions on 40m (which is the WAB’s scheme primary band). The award started on the 1st of July 2017 and my personal goal (see my amateur radio goals for 2018) is to work over 2500 squares/contacts before it finishes at the end of this year. Why 2500 contacts? Well there are many paper awards before this, but I’m specifically after the trophy available after you work 2500!

You can work the same station/square again and again on subsequent days, which has created a lively WAB net on 3.760 MHz and even 7.160 MHz when 40m has been supporting NVIS propagation (i.e. not often right now!).

Working the same square each day

So far I’ve worked 763 valid QSOs for this award since last July, but I had a very slow start to this year by being out of the country for the first 3 months! The first QSO I made was at the start of April, but now I’m warming up nicely, and boy do I need to! I still have to work 1,737 squares/contacts before the end of this year, this is a lot! 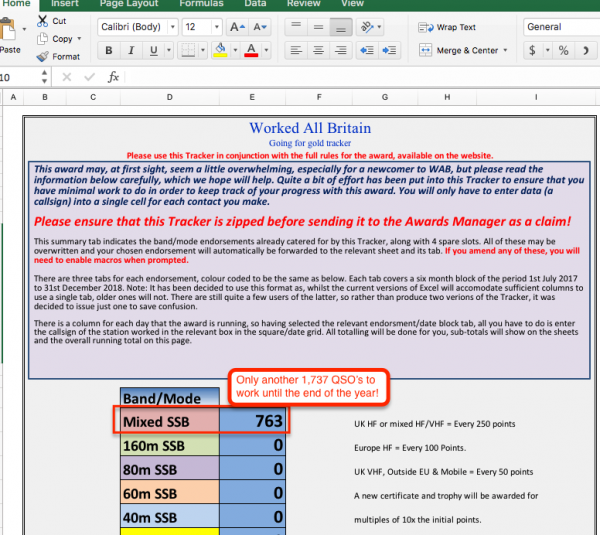 If you want to take part in this award download the Excel spreadsheet tracker and start collecting! You can join the WAB net on 80m (most active in the evening between 7pm-9pm, but starts up during the day as well), tune into 3.760 and get working people, you’ll be most welcome! Even if you don’t collect, others will still be keen to work you, especially me (M0JCQ).

Will I manage the required 2,500 contacts required before the years out? I’m not so sure, but I’m going to make a lot of contacts and fun trying. I find that goals like this gives my hobby some direction and provides me the motivation to be on the air more. 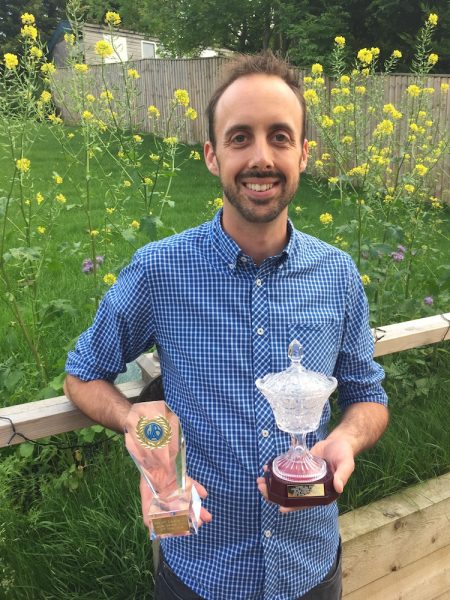 9 thoughts on “Going for Gold with the WAB Award Scheme”