Now that the Dengue fever has been and gone we’ve moved onto Vietnam. We stopped off at Koh Tonsay (aka Rabbit Island) in Cambodia before leaving the country, and this island was lovely, really quiet and the village island life has really been preserved on this tropical island. The boat journey out to this island was a bit scary due to a combination of strong cross winds and being in a small fishing boat, the boat came close to capsizing a few times, but luckily we made do with a thorough soaking from the waves.

Here’s a picture of Chrissy carrying her backpack through the water to the little fishing boat to take us back to the main land (sea was much calmer on the way back as you can see!):- 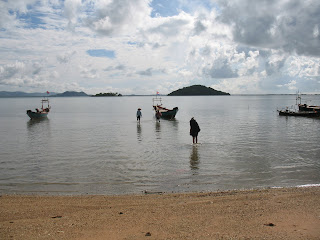 We left Phnom Penh (capital of Cambodia) on the 1st of July for Ho Chi Minh City (Saigon) in Vietnam, this was the earliest we could get across due to visa validity. This border crossing was interesting (in fact all Asian over land border crossings are interesting!), we didn’t have to bribe our way through this time, but the Vietnamese officials were super scared of us coming in with Swine Flu, so before we were let off the bus to go through immigration officials entered with full face masks and proceeded to check all foreigners (it seems Cambodian and Vietnamese don’t carry swine flu…), normally i’d have no problem with this, however they were doing it with a thermometer that goes in your ear, and they weren’t cleaning it let alone sterilizing it between use! This was grim, and one English guy kicked up a huge fuss saying it wasn’t going anywhere near his ear, and that if she preferred she could stick it up his a*se! This started comically, but the border official was in no mood for this backchat (probably not used to her authority being challenged) and continued to yell at him in Vietnamese! This went on for about half an hour, and all the other foreigners just sunk deeply into their seats not trying to get involved. Amazingly they let him through after half an hour of arguing.

We arrived in Saigon at 3pm, and went about trying to find some accomodation, after we established where in the sprawling city we were (three requirements for this: map, compass, and land marks!). Saigon has been a lot of fun so far, a lot of travelers we met didn’t like it but we quite enjoy the madness of the place. It has a population of ~6 million and most of these citizens ride mopeds. If theirs one thing which symbolizes Saigon it’s the moped, they are everywhere, driving in all directions on the roads, and theirs quite a few rogues on the pavement too! The place is so busy that it has an electric buzz to it, this is something we enjoy for small amounts of time.

Here’s a shot of traffic waiting for the red light to change (well some people wait and some just go anyways!):- 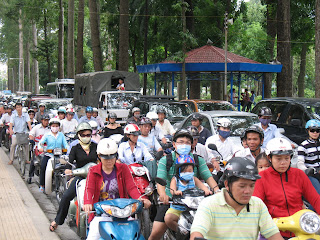 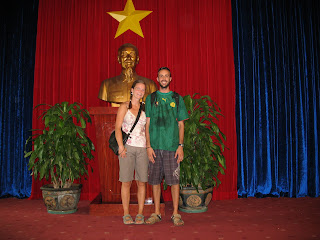 Vietnam is currently a socialist country with liberal economical laws, since they noticed pure communism wasn’t working they introduced economic reforms to allow individuals to own businesses, and since then the country has been growing steadily. Although there are red flags everywhere and Uncle Ho is reveered like a deity, the country (some would say) is capitalist with socialist leanings. Quite interesting for the outsider to see.

Earlier we got on two cyclos to take us back to our hotel, this had to be done, not only because we were shattered, but also this is the slowly dying form of transport that once represented Saigon. The guys left eeking out a living with these cyclos are mostly old guys that have done it all their lives, and once that generation ceases the cyclo maybe lost forever.

The cyclos are a lot of fun and very scary at the same time, you’re mounted at the front in a chair with the driver behind you, facing oncoming traffic head on, and in fact from all directions! You get to experience the hectic city in a slowed down state just cruising through, it’s quite strange, and of course you need to watch out for bag snatchers on mopeds (a bit too common here). Here’s Chrissy on the cyclo with her driver, who had been doing this for 55 years, experiencing the struggle against Northern Vietnam, the Americans, and the eventual fall of Saigon, quite a life:- 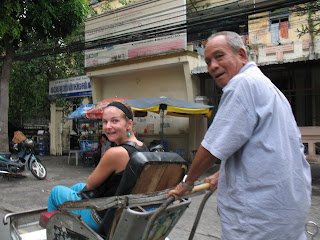 Tomorrow we fly all the way to the North of Vietnam to the capital Hanoi, from here we will work our way back down south over the next month before flying back from Saigon.