Me and Christina have just returned from a raw four day trek into the remote hill tribes of Laos and had an awesome time.

The trek was arranged through an eco tourism company called Tiger Trail where the money you pay is distributed to the villages that you visit and the local community.

The trek was four days long and involved some stunning jungle scenery, a lot of walking in 40+ degrees and a lot of curious stares from the local Hmong and Kamil tribal villages we stayed at. Me and Christina were quite concerned that it might feel like a zoo, where we just stare at them like animals, but it was indeed the complete opposite. Everyone looked at us, and we wouldn’t have drawn anymore attention to ourselves if we’d been dressed in crab suits with a squirrels tail and and a space mans helmet!

The villages we visited cannot be reached via road, and involved some arduous trekking up and down remote hill slopes of Laos. The villages were really simple, no electricity, no running water, and the people don’t even speak Laos let alone English!

Our guide was originally from the Kamil tribe and could speak the tribal dialects which was very handy.

Our accommodation was with the local families in the villages, so much of the time this was a bamboo hut with a mud floor. It was really the authentic experience we were looking for.

The following picture is of the local Hmong children who were fascinated by us, and even more by my camera:- 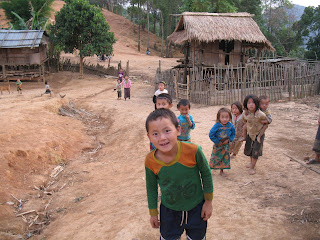 It seemed like they had never seen white people before, and i managed to make many tribal babies cry because of my beard, it got to the stage where i would cover it up with hands!

Here’s the first village we stayed in:- 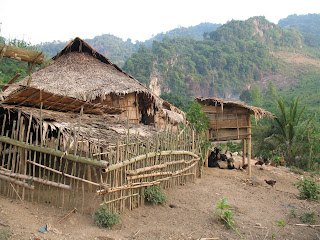 On the last day we were both feeling quite sick, we’d eaten something dodgy at some point and had been sick during the night, but luckily we met some other “falang” (Lao word for foreigners) who had some antibiotics to kill stomach bacteria. We chased these industrial strength Thai made pills with a few glasses of Lao Lao (home brewed rice whisky!) offered to us at the local village party. These combination was surprisingly effective!

Here’s a picture of Christina dancing with the locals (these people know how to drink, and were pretty much drunk at 3pm!):- 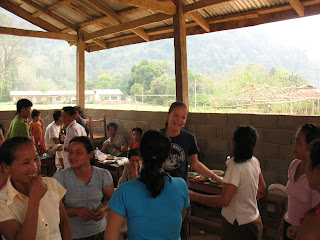 Tomorrow we leave Louang Prabang and head down to Vang Vieng, where we plan to do some kayaking and tubing (essentially where you sit in an inflated tractor inner tube and float down the river).

Laos is proving to be a very nice country so far, and should prove to be a highlight of the trip. We only have Cambodia and Vietnam left after Laos, and the end of the trip is nearing. We’d probably both agree that six months is a perfect amount of time, we both start to miss the stability of a home, and just knowing where you’re going to be sleeping tonight!