One bus crash, one tropical island, and one dose of Dengue Fever 2

Recently our experiences have been a little bit mixed. Some great experiences and some not so great…

We left Battambang and took the 13 hour bus journey to the south coast city of Sihanoukville this in itself would be bad enough but around 11 hours in we were involved in a bus crash. The bus in front of us crashed into the back of a car, and we in turn smashed into the back of this bus. Throughout our trip we’ve had a number of near misses and now are well accustomed to assuming, what i call, the “brace, brace” position ready for impact, by grabbing the seat in front of us. Normally the bus drivers always manage to avert the situation, but our one wasn’t so lucky and the front of our bus smashed into the back of the other bus (where the engine is!), we were in the second to front row and were showered with glass shards, but other than that luckily everyone seemed ok if a little shook up. We thank our lucky stars we were on one of the newest buses we’ve come across on our trip, because on some of the death traps we’ve been on elsewhere i don’t believe we’d have been so lucky. Anyways we ascertain that we’re both ok and then look around to make sure no one else is seriously injured, which their not. It’s then that we see a load of liquid spilling out of the bus in front of us (eekk!), so this ensured we got off extra quick however the door was just tangled steel, so had to jump out of a smashed window above the front wheel arch, which you can see in this delightful little photo:- 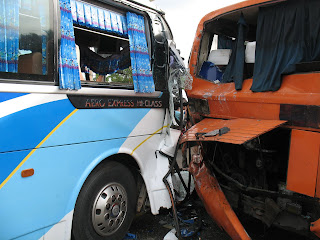 We then noticed behind us the VIP bus that we had previously shunned in favor of the local bus had pulled in behind us. I was not keen on getting stranded next to bus wreckage for hours so approached the bus driver and asked for a lift, i explained the situation and he must have even seen us pull our selves from the bus wreckage, and then instinctively asked for $6 to take us, i then instinctively started bargaining down – this was the point that we realised that we’ve been in Asia for too long, we’ve just escaped by the skin of our teeth and there we are bargaining already, crazy! We got a good price in the end, and gave the conductor the tainted money as we were picking glass shards out of each others skin and skull. We had our second taste of shock on the trip as well, i get nauseous and Chrissy cries! These near death experiences are a bit too common on this trip, and although they make for cool stories we could both do without them now!

From Sihanoukville we decided to escape to a tropical island to relax for a few days, we chose a really small island called Koh Ru (aka Bamboo Island – ironically we didn’t see any bamboo!), we caught a little fishing boat across and arrived at the most perfect unspoilt beach we’ve seen on our trip. Now the beach only has ten bamboo bungalows on the beach and one restaurant to get food from, so it’s majorly underdeveloped and amazingly quiet and hassle free.

Here’s some photos of the beach:- 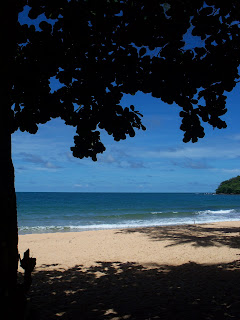 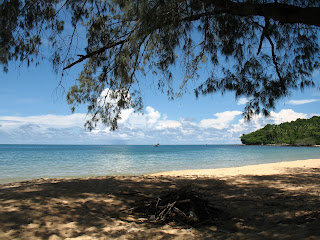 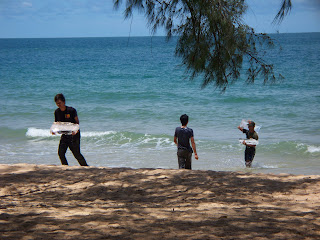 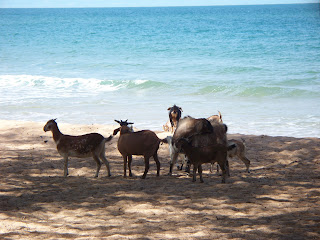 This was all perfect except one day into Koh Ru i started feeling really ill, with the worst headache of my life, this i initially thought was severe dehydration, until it was followed up by bouts of a high fever, severe pains in the head, bones & muscles, vomiting, oh and not being able to move! We put all the symptoms together and came up with Dengue Fever (aka Brokebone fever), this is really quite prevalent in Cambodia and is spread by day-biting mosquitoes particularly in rainy season (which it is now). Here’s my laying in a Hammock waiting for the return fishing boat to take us back to the mainland from paradise:- 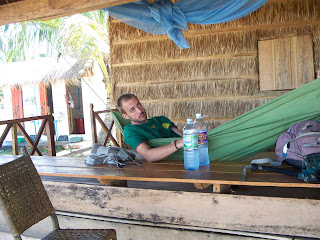 I look so happy don’t i? The boat back was a nightmare, a storm had picked up as well as the wind so we had an hour and a half in a fishing boat going through crazy waves, getting sprayed until soaked with saltwater while my body was trying to fight this, not cool!

We eventually got back and we got ourselves to a guesthouse, and i didn’t move again that day, thankfully Chrissy could get food for me, but the rest of the day was spent shivering in bed with all covers on and a hooded top (it’s still 35 degrees in the room!) and then far too hot the next minute.

Thankfully after three days of unpleasantness it seems to have gone, leaving me feeling quite lethargic (apparently this can last between a few weeks and a few months!), but that’s better than what i had before. Adults generally survive Dengue Fever, and normally takes between 3-10 days for it to go, there’s no vaccine for it, and there’s four varieties of it. I’m now immune to one strain it would seem!

We’ve decided to move onto Kampot tomorrow. Vietnam is also well on our radar now, and today we booked an internal flight from Ho Chi Minh city (Saigon) to Hanoi, as we’ll arrive from Cambodia in Ho Chi but we actually fly back to London from here so we need to make a beeline for the north and work our way back down the snake country.

2 thoughts on “One bus crash, one tropical island, and one dose of Dengue Fever”