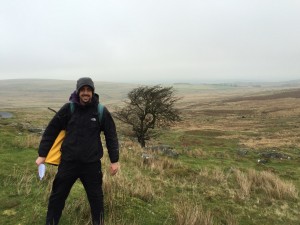 Last Friday me and the XYL drove down to Devon to visit my family and decided we would go for a walk on Dartmoor. Naturally the High Willhays made sense as it’s also a SOTA summit.

In short the activation was nasty, visibility was poor and winds were very strong, by the time we got to Yes Tor we were cold and spirits were low so we decided we would not walk on to High Willhays. But the XYL gave me the reluctant go ahead to set the equipment up and I think this is still a valid activation point only being 2m lower than the Willhays, to be honest we couldn’t even see the High Willhays due to the rubbish visibility.

On the Yes Tor summit the winds were strong enough to blow you off your feet, so we hid behind a rock a little lower. I made a short video which shows the conditions and me almost getting blown off the trigpoint (apologies for the bad audio… too much wind!):

In total I made 6 QSO’s in a grand total of 4 minutes of operating on 40m. Thanks to G0HRT, M0IBC, G0RQL, G4WSB, M6KVJ and G6ODU. The XYL held onto the fishing pole holding up the antenna during the QSO’s, as it kept collapsing when it was guyed.

Apologies to other chasers for the short activation but given the conditions on the summit we decided it best to descend as quickly as possible!

Here are a few photos from the activation:

The walk back was really tough as visibility was down to 10m and we had lost all our visual references, we eventually found a track and stuck to this until we could ascertain exactly where we were on the map, based on the junctions along the path. To say we were happy to be back at the car would be an understatement and we learnt that walking in the Moors is not to be taken lightly and preparation is key.

My XYL has vowed never to join me on another SOTA activation and to be honest based on this experience I don’t blame her!