I’ve been slow off the mark with this blog post, but years ago I posted my Top 10 PSK31 Tips for Beginners guide and it was really popular at the time. I’ve held off writing this post, so that it could be a (hopefully) genuinely useful post, as opposed to just jumping on a hot trend!

Over the last few years PSK31 and its variants were replaced by a new data mode… FT8. This data mode has truly come to dominate both the HF and VHF bands, to the extent that it’s becoming rarer to find much SSB and CW activity, regardless of any other data modes on a given band!

The following tips are comprised of my experience of using FT8 for a few years, since it was first released back in 2017. I’ve had 3,000+ FT8 contacts across bands from 160m right through to 70cm.

1. Stick to a Single Frequency

This is probably where a lot of beginners go wrong. Try and find a clear frequency and then stick with it, regardless of whether you call CQ or respond to others. The Hold Tx Freq option is your friend in WSJT-X:

This will ensure that you always transmit in the same place and importantly you don’t keep hoping around the band.

Why does this matter? Well, you’re more likely to be decoded if you’re replying to another station off of his own frequency. If you move to their frequency then you could be competing with other stations.

Also we’ve all had it, where we’re happily running on a frequency, then a station works you and then proceeds to stay there and call CQ on ‘your’ frequency. It’s annoying and typically the other station isn’t even aware they’re doing it!

If you’ve used data modes like RTTY and PSK31 in the past, then you’re probably used to random receive and transmit cycles where you click a signal and transmit as soon as the other station has finished.

FT8 (and the other WSJT-X modes) demand perfect timing, so perfect it’s beyond most of us to get right! If you’re computer clock is off by 2 seconds or more, then most likely your signals won’t be decoded by others, and no one else will even see your calls!

Your native Windows clock is likely to drift very quickly, unless you keep it trained to an accurate clock via the internet. I personally use Dimension4 to do this. It’s free and every 30 minutes it automatically synchronises my PC clock with an accurate reference online.

It’s worth taking a look at the ‘Colors’ tab within the WSJT-X settings and learning these. This will allow you to quickly act on something you may ‘need’ like that rare DXCC or that rare grid square. 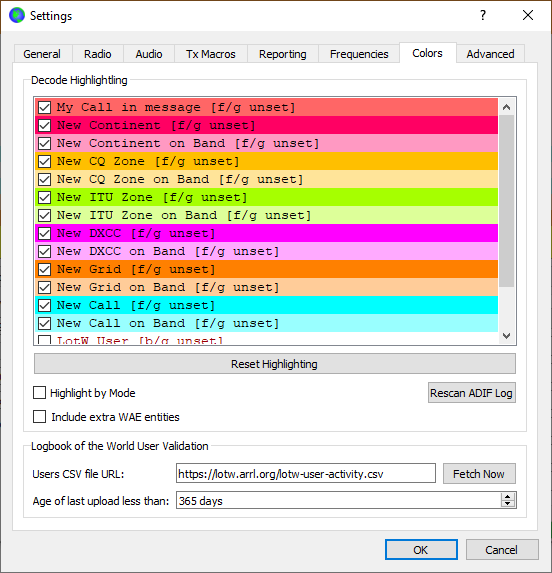 4. See Where You’ve Been Decoded

The PSKReporter.info website is a very useful tool to find out first of all if you’re getting out, and secondly where in the world you are being heard!

This gives you an almost real time summary of the propagation on your chosen band, it’s a great way to just understand the possible HF paths which may be open at a certain time of day. 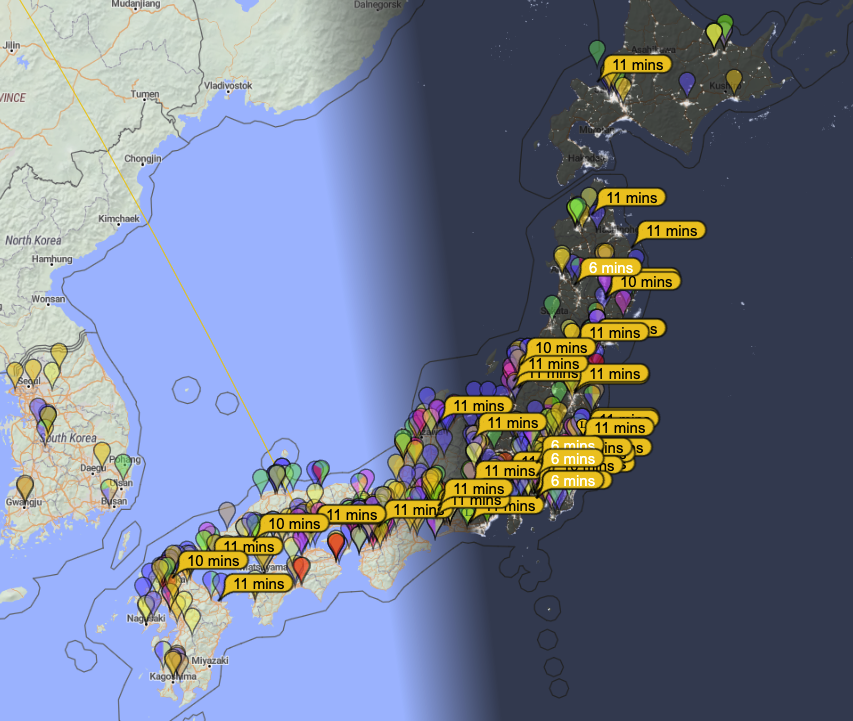 I typically have this running and check it every 20 minutes to see what I might be able to work or how propagation is changing to favour a certain area of the world.

Observing this resource has allowed me to work a lot of DX:

Pileup of JA stations calling me on 20m

One misconception is that FT8 can be like shooting fish in a barrel, but it’s not always easy to “work the world”. The vagaries of propagation still come into play. Conditions can change quite quickly with openings appearing and fading out.

If a station doesn’t respond to your call straight away, try leaving it calling them for a few cycles.

The conditions might just swing in your favour, then they can decode your message.

This is another great reason to operate away from the other station’s frequency; you can continue calling them while they’re in a QSO, without you interrupting it and you might end up possibly being worked straight after.

I used to give up a bit too quickly, but found that perseverance (especially with DX stations) usually paid off.

Without going into too much technical detail here, your FT8 decoding will be more sensitive if you set your WSJT-X decoding settings to ‘Deep’ and ‘Enable AP’:

Deep decoding throws more of your computer power at decoding the signal. While AP (a priori) uses heuristics and known information to decode messages, which otherwise wouldn’t be decoded.

Deep decoding comes with a performance penalty, your computer may not decode all received signals before the next time period starts. While using my old shack laptop, I found this to be a problem when decoding a busy 20m band, but after upgrading I use it all the time now. You can always drop back to ‘Normal’ decoding if you notice this.

Enabling AP on the other hand can introduce some unusual side effects with the decoded message. If the callsign looks funny, then it’s probably incorrect. It easy to see which messages had AP applied to them:

Use your brain here – if it looks funny to you, then it’s probably not right!

Sometimes you’ll see a large signal on the Waterfall, but WSJT-X can only occasionally decode it, but at worst just cannot decode any of the messages at all. The station seems to be transmitting accurately timed signals, but nothing shows up, how strange!

I’ve found that simply turning down your rigs RF Gain will allow the messages to be decoded. A simple fix, but if you’ve not used other data modes you might not think to do this!

8. Not Getting Many Replies to your CQ Call? Change Frequency

You may find that for whatever reason you are not getting any responses to your CQ calls. This could be down to a number of factors, but it’s always worth checking to see if your chosen frequency is clear within your chosen TX timeslot.

If another station is transmitting on your frequency or nearby during your TX timeslot, then other stations may not be able to decode your messages in order to even see your CQ messages.

Even if you still can’t see anything else when just receiving during your timeslot, there could well be another station on the same frequency which your DX is seeing, but you’re not.

I’ve found it worth while moving frequencies, if you’re not getting much luck, it usually works!

If you’ve spent a while using one timeslot (say even TX), then why not switch to the other one? This might net you a whole new haul of stations to work.

For me this usually leads to an (initial) increase in contacts and obviously allows you to work stations not worked in your other timeslot. I tend to keep switching between these timeslots every 20 minutes or so.

How to switch TX timeslots in WSJT-X

A word of warning here: make sure there are no timeslot conventions on your chosen band. VHF bands have a convention where your timeslot is chosen based on your location, in order to prevent nearby stations interfering with each other, when you’re all trying to receive distant and weak DX. Your RF neighbours won’t thank you for breaking this convention.

10. Pay Attention to all Received Messages to Spot DX

WSJT-X will decode all messages across the 3kHz spectrum of the band you’re using (or less depending on your radios selected filter). This can result in many decodes on a busy band like 20m.

I’ve spotted quite a lot of DX and then subsequently worked them, without ever seeing them call CQ! DX stations are often overwhelmed by stations calling them, so don’t often need to call CQ.

By monitoring all messages (not just highlighted CQ messages) in the left hand ‘Band Activity’ pane, then you might just spot some rare DX lurking. You might also notice a number of other stations calling a DX station during your RX timeslot. A simple switch to the other timeslot and you might just be able to decode and then work them.

This has netted me a number of DX stations I would have otherwise missed by just paying attention to CQ messages only!

These are my top 10 operating tips for FT8 using WSJT-X, these are all learned based on my experience and hopefully there’s something of use here.

What have I missed? What would you add here? Let me know in the comments!