This was a harder activation than I had anticipated. I chose to activate Wentwood (GW/SW-033) on my way home from the Brecon Beacons. I had done 4 major summits in the last two days so I was looking forward to an easy one pointer to round things off.

I first of all parked too far away from the activation zone, using a big car park some distance away. My advice is to pull in on the dirt track leading to the masts on the summit. There are stones stopping you from driving right up, but there’s enough space to park just before these stones. The walk will then be a matter of minutes rather than the 20-30 minutes it took me!

I wanted to activate this for the Worked All Britain Trigpoint award as well, so naturally I setup next to the rather hidden trig (TP6796). This is just off the main path soon after you pass the mast. It’s a little tough to spot from the path as it is well camouflaged with branches and other debris: 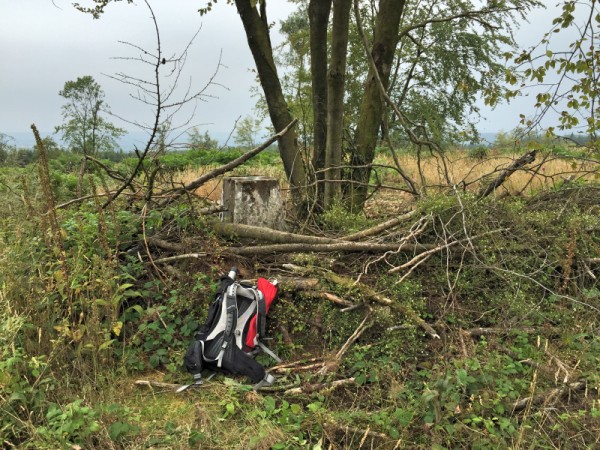 I started the activation by quickly setting up my Yaesu 817 and a vertical dipole in the trig for 2m. The 2m band which had worked so well for me on the Brecon Beacons really didn’t work on this summit. I called and called on the FM simplex calling channel and spotted myself, but I couldn’t raise anyone. I think the reasons were down to it being lunchtime on a Friday afternoon and the much lower elevation of this summit than the Brecons. Also the summit has quite a lot of trees (although a lot have been felled recently). Others have succeeded up here using 2m but not me! 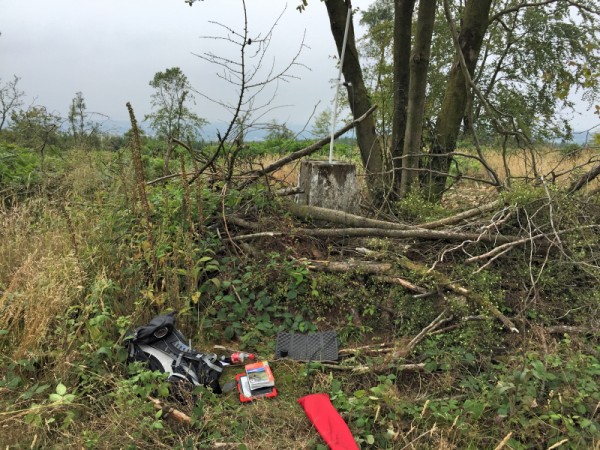 My Operating Position on Wentwood

After no takers on 2m I setup my linked dipole for 40m, spotted myself and put out some calls. Gert PA7ZEE and Mick M0MDA came straight back to me, but after that nothing was heard. 40m conditions were shocking on this day, with high level D-Layer absorption meaning no other G-chasers could make the log. After calling for some time I decided to move to the 20m band and try and rescue the activation.

I unclipped my linked dipole for 20m and spotted myself again… Things were looking slightly better now, as I got OK2PDT, DL1DVE, OK1SDE and CT1HIX in the log. These QSOs weren’t straight forward as signals were weak and needed a few repeats. After these four callers I’d run the pile up down, most odd, I wonder how many SOTA chasers had tuned in but had simply been unable to hear me.

After getting 6 QSO’s in the log I decided to cut my losses and stop flogging a dead horse. Conditions were quite frankly awful and this was the first activation where I was concerned I might not even manage 4 contacts. It took 3 bands to achieve 6 contacts, while under average conditions you can log 30 QSOs on a single band before the pileup subsides.

Would I return? Probably not, the views weren’t particularly impressive and the much more spectacular Brecons are nearby, still it’s another South Wales summit ticked off the list!