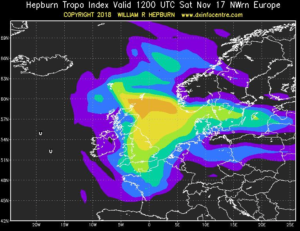 Tropo forecast for the Saturday

I’d been watching the tropo forecast with anticipation for the 17th-18th of November 2018 and had planned to go out portable to see what I could work on 2m VHF.

In the morning I’d had a scan on 2m from home (using a Diamond V2000 colinear) and I could see conditions were up, as I could work several French stations (who are in my worst direction – there’s a big hill behind me!). With that confirmed, I set out late afternoon armed with my Icom 7100, 50 watts, laptop, leisure battery and a 9 element Tonna Yagi pointing north west.

After some fault finding I had TX working on WJST-X (I always need to tweak these settings with the 7100). The FT8 decode screen was looking very lively with a fair bit of activity towards Scandinavia:

In between I also worked a lot of G stations, activity levels seemed higher than usual, due to the tropo lift. Sadly no activity was heard on SSB, and only a few locals worked on FM – seems to be the trend now – everyone on FT8 and few using any other mode.

The next morning I woke up and decided to try and catch some more tropo fun, looking at the tropo forecast I could see it was all to the North of England, but I thought if I could at least get my signal into the tropo zone, then I could maybe catch it from there and see where it goes!

This day was more dominated by G stations, but there was a fair bit of activity on SSB. After working a local I was called by MM0EDZ in IO87 (a new square for me, at the northern end of Scotland), strangely he was actually louder than the local I had just worked down the road. That was a turn up for the books and showed there was still some tropo to the north. Normally this contact would not be possible due to the enormous amount of hills between me and him! 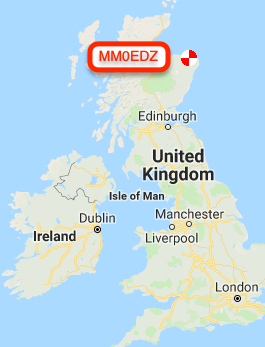 Location of MM0EDZ, while I was operating just west of London

Next I setup a sked (using Twitter) with Neil MI6XZZ/P, who was operating portable from IO74 (a hilltop on the coast of Northern Ireland). I pointed in his direction and we managed to work, although he was a tough copy as he was only using 7 watts and his rig was off frequency!

Here’s a video of both MI6XZZ/P and MM0EDZ calling at the same time on the 2m SSB calling frequency:

FT8 wasn’t quite as exciting this day, with mostly G’s worked and nothing heard towards Scandinavia. I did however catch DB5KN (JO31) and DB5KN (JN39), it’s always nice to work Germany on 2m.

The tropo lift definitely seemed stronger on Saturday, at times the WSJT-X decode screen looked like I was on 40m! Local amateur consensus seemed to be that the lift was stronger towards the north of the UK, but really looking back at my log I’m very happy with what I managed to work. 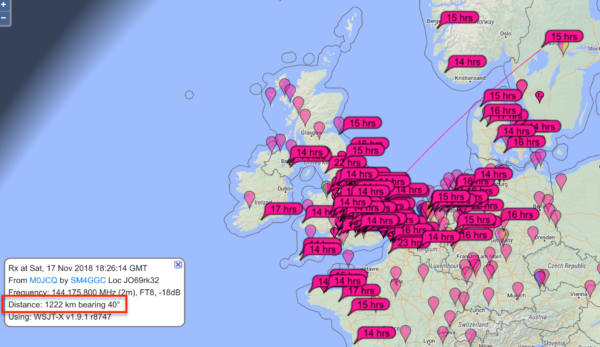 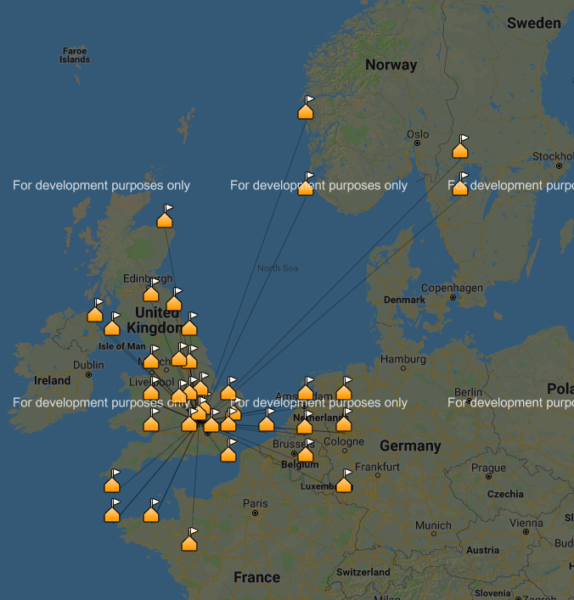 QSO map for all contacts over the weekend

Sweden and Norway were both new DXCC on 2m for me. I’m really glad I made the most of the opening and caught my second ever tropo opening. So far I’ve managed to get four new countries confirmed on ClubLog: