It has snowed on Christmas day! The snow held off until evening and has started falling, with temperatures due to drop to minus 10 degrees tonight, chilly!

We went out for a Christmas evening walk to experience snow on Christmas day, which for an Englishman is quite a rare occurance. 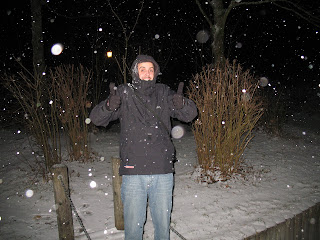 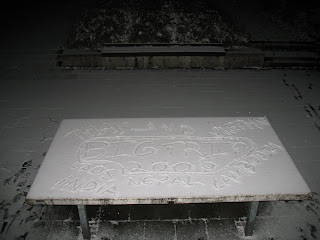 Here’s some snow graffitti we carried out on some unassuming ping pong table, we thought it would be cool to write this in snow, and then a few months later in sand on a tropical beach somewhere in Asia.

Two days ago we visited the town of Regensburg which is about one and a half hours outside of Munich by train. It’s very well known for it’s Christmas market which is held on the premises of a royal palace. We visited this after dark, which was very nice and really Christmassy, the German christmas is a lot more traditional and in some ways retains some of the magic of Christmas that we seem to have lost in England through over commercialisation. 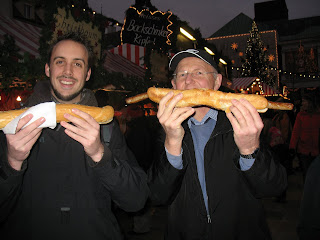 At the Christmas market i also discovered the culinary delights of the half meter feuerwurst (fire sausage), it’s a hot dog and a half (metre)!

This photo is of me and Christinas father (Georg)